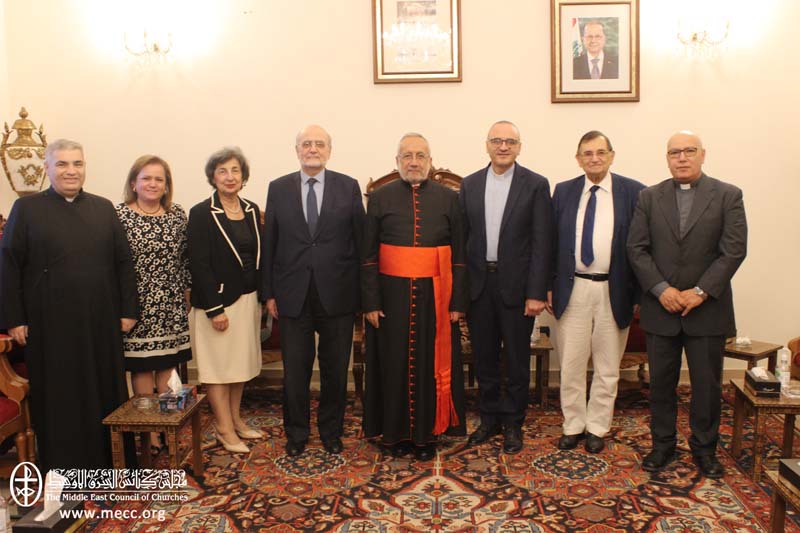 A delegation from the General Secretariat of the Middle East Council of Churches visited His Beatitude Patriarch Raphaël Bedros XXI Minassian, the new Patriarch of Cilicia for the Armenian Catholics at the Patriarchate headquarters in Beirut. The delegation congratulated Minassian on his election as Patriarch and head of the Armenian Church, which has a remarkable role among the MECC member Churches.

The delegation was headed by the MECC Secretary General Dr. Michel Abs, and included Father Dr. Tanios Khalil,  President of the Association of Institutes and Faculties of Theology in the Middle East (TED), Father Dr. Antoine Al Ahmar, Director of the Theological and Ecumenical Department, Dr. Antoine Tohme, Secretary of the Episcopal Committee for Ecumenical Relations for the Council of Catholic Patriarchs and Bishops, Director of the Communication and Public Relations Department Huguette Salameh and Executive Assistant to MECC Secretary General Seta Hadeshian. The Patriarchal Vicar His Excellency Archbishop Georges Asadourian has also joined the meeting.

Following an overview about the relationship between the Council and the Armenian Catholic Church, Secretary General Dr. Abs presented to His Beatitude the ongoing preparations for the MECC General Assembly which will be held in Egypt, in May 2022. He also briefed His Beatitude on the preparations for the celebrations of the upcoming Week of Prayer for Christian Unity; stressing on the main role of MECC in 2022, since the Council chose the topic of Prayer for this year and prepared the texts for the eight days of Prayer for unity between January 18 and 25 as requested by the World Council of Churches and the Vatican.

Afterwards, Father Khalil asked His Beatitude if his Beatitude can host the opening Prayer Celebration in Lebanon for the week of Prayer in St. Elias Church downtown Beirut. Noting that the closing Prayer will be hosted by the Antiochian Orthodox Church.

At the end of the visit, the delegation wished His Beatitude a blessed journey with the grace of the Holy Spirit, following the example of the Saints and Fathers of the Church of Christ, as he believes in one universal and Ecumenical Church.