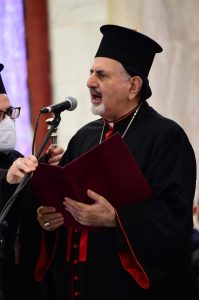 Iraq 07/03/2021
Speech of His Beatitude Ignatius Ephrem Joseph III Yonan (Syriac Catholic Patriarch of Antioch and all the East of the Syriacs) in the great Al-Tahira Syrian-Catholic Church (Church of the Immaculate Conception) during Pope’s visit to Qaraqosh (Baghdeda).

By Fionn Shiner AMID a spiraling economic crisis and an upsurge in violence, a Middle Eastern Patriarch says that if the West fails to help the Christians in Lebanon the community could soon be extinct.

During a visit to the international headquarters of the Catholic charity Aid to the Church in Need (ACN), Syriac Catholic Patriarch Ignatius Joseph III Younan of Antioch and all the East of the Syriacs, said Christian migration from Lebanon urgently needs to be stemmed.

Warning of an exodus of faithful from a country where Christians number more than 2 million or 35 percent, he said: “We are very, very scared that if this crisis continues it will be the end of Christians in Lebanon and the whole of the near East in a few years.

“Normally when Christians leave, as happened in Iraq, Syria, and Turkey, they don’t return.

“They ask, ‘Why should we return when we can’t guarantee our children a decent life nor religious freedom?’”

He added: “One of our clergy went to get a residency permit and an official told him that they issue 5,000 passports a day, and that they estimate that at least 3,000 of these are for Christians who then leave.

“We can’t convince them to stay because they say, ‘How can we endure this situation? There is no hope for our future.’.

“You have to look at the problems in Lebanon and tell the politicians that enough is enough. Perhaps it’s no more in the interest of the Western politicians. They have other issues to deal with.”

Last week, fighting broke out in Beirut, killing seven people, after demonstrations protesting to have Judge Tarek Bitar removed from the investigation into the August 2020 port explosion in Beirut which killed more than 200 people and levelled large parts of the city, heavily affecting Christian districts.

The country is experiencing a serious economic crisis that has led to spiraling inflation with more than 50 percent of the population living below the poverty threshold due to corruption, weak public infrastructure, and the COVID-19 pandemic.

Patriarch Younan criticised Western priorities, saying that European governments were more interested in animal rights, and other minorities, at the expense of Christians.

“[The West] are not doing with wisdom and honesty what they have to do to defend the minorities in the Middle East, particularly the Christians. We have been here for millennia. We endured all kinds of oppression.”

ACN has provided more than £5 million in aid for Lebanon following 2020’s dockside blast, including emergency aid and repairs for church buildings in Beirut’s Christian quarter.

In 2021, ACN has so far supported more than 100 projects in Lebanon and Syria.

Aid to the Church in Need UK is a registered charity in England and Wales (1097984) and Scotland (SC040748). ACN’s UK office is in Sutton, Surrey and there is a Scottish office in Motherwell, near Glasgow and another office based in Lancaster.