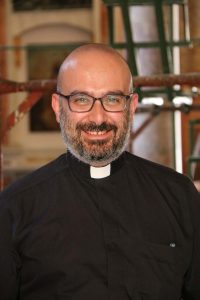 By John Newton A PRIEST grappling with Lebanon’s crisis has appealed for action to safeguard the future of the country’s ancient Christian community ahead of tomorrow’s historic meeting between the Pope and Church leaders.

Father Jad Chlouk told Catholic charity Aid to the Church in Need (ACN) – which has increasingly highlighted growing problems for Lebanon’s faithful – that the need for international support is now more urgent than ever.

His comments come amid growing concerns about the migration of Christians, the disproportionate impact on the community of last August’s Beirut explosion, the country’s economic crisis and fears for the survival of Catholic institutes.

The priest from the Maronite Archdiocese of Beirut said: “Christians are experiencing tough times, doubt, and confusion after the pandemic, the economic crisis, and on top of all these, the explosion.”

Beirut’s Christian quarter bore the brunt of last year’s blast, which killed more than 200 people, injured more than 6,000 and left in excess of 300,000 homeless.

Regina Lynch, director of projects at ACN, described the extent of the crisis facing the Christian community.

“So it’s really five minutes to zero hour now at the moment in Lebanon.”

Financial problems have led to an estimated 55 percent of the population living below the poverty line.

Father Chlouk said: “The majority of Christians are suffering from poverty.”

Father Chlouk said that Christian numbers were falling, as Church members emigrate to the West to join family among the Lebanese diaspora.

More than 380,000 requests for immigration from Lebanese citizens have already been presented to the embassies of EU and North American countries. Most of the requests come from Christians.

He said: “Sadly, our country is now experiencing a brain drain.”

Father Chlouk stressed that most Christians are after security for their families rather than handouts.

He said: “Christians are not asking for donations. We are asking for stability and a safe country to live in.

“We need a guaranteed environment to help our kids grow in the midst of a tight-knit Christian community.”

The historic meeting between the Pope and Lebanon’s Christian leaders – set for tomorrow (Thursday, 1st July) – is described by the pontiff as “a day to reflect on the worrying situation in the country, and to pray together for the gift of peace and stability”.

ACN has provided more than £5 million in aid for Lebanon following 2020’s dockside blast, including emergency aid and repairs for church buildings in Beirut’s Christian quarter.