In a historic and unprecedented move at the request of the Assyrian National Council-Australia (ANC), the Australian House of Representatives passed a lengthy and comprehensive motion without objection recognizing the Assyrian people are the original and the indigenous people of Iraq. The motion goes on calling on Iraqi

government to take all appropriate steps to protect the Human rights of minorities including Assyrian Christian people , to activate their inspiration in the establishment of an autonomous region in the Nineveh plains which was agreed on by the Iraq Government in 2016, and calling on the government of Turkey to immediately cease their military campaign in civilian areas of Northern Iraq which has resulted in the evacuation of dozens of Assyrian villages and displacement of thousands of Assyrians.

The (ANC) extend its heartfelt appreciation to the Assyrian Organization and their members for their support and presence during the debate, including Saint Zaia Association, Assyrian Khabour Association ans Associations of Iraqi Christian in canberra.

The formal text of the motion is as follows:

MR BOWEN: To move—That this House:

(l) recognises that the Assyrian people, who are Christian by religion, are an original and Indigenous people of Iraq and encourages the Government of Iraq to reflect this in the Constitution of Iraq.

(2)        notes the aspirations of the Assyrian and Chaldean people for the establishment of an autonomous region in the Nineveh plains and welcomes the in-principle agreement of the Iraqi Government to this request in 2016;

(3)        being aware of the Assyrian aspirations for the establishment of an autonomous province, calls on the Government of Iraq to take all appropriate steps to protect the human rights of minorities, including the Assyrian Christian people, and to support the continuation of their linguistic, cultural and religious traditions.

(4)        reaffirms the rights of Christian and other minorities of Iraq to live in peace and freedom and calls for all steps to be taken to ensure that members of the affected communities can live in freedom in Iraq; and

(5)        calls on the Government of Turkey to immediately cease their military campaign in civilian areas of Northern Iraq which has resulted in the evacuation of dozens of Assyrian villages and the displacement of thousands of Assyrians.

This House has heard before about the plight of the world’s Assyrian people—the plight that has had generations of violence, of oppression and, indeed, of attempted genocide. This situation worsened following the fall of Saddam Hussein. I remember celebrating with our local Assyrian people after the fall of Hussein, because it was felt that brighter days might be ahead. But, alas, that was not to be the case. There were, it is estimated, one million Christians in Iraq in the year 2000. There are now 150,000.

Today I want to bring the attention of the House to in particular the plight of those Assyrians in north-west Iraq, who have fled ISIS inspired violence in the past and are now being subject to bombings by Turkey in relation to the dispute between Turkey and the PKK. Those Assyrians who live in the Duhok province and in villages like Zakho and Bersivy are people who have been driven out of other towns and cities in Iraq, particularly around 2014 with the rise of ISIS. The Arabic letter ‘nun’ was put on the doors of the homes of Assyrian people and they were told to convert or face murder, and they had to flee. Accordingly they fled to villages where they are now being bombed.

In the brief time remaining I want to touch on a few other elements. I want to take this opportunity—I think it’s appropriate in the House—to pay tribute to the patriarch of the Assyrian Church of the East, Mar Gewargis III. He has been the patriarch since 2015. He is a much-loved figure by Assyrians around the world, including in Australia. I met him on his first visit to Australia as patriarch. I met him more recently when he came to Australia to consecrate Mar Benyamin, the bishop of Melbourne, and Mar Awraham, the bishop of Western Europe. He is a good friend of Australia and a wonderful leader of Assyrians around the world. I was particularly honoured and pleased to meet him on my visit to Iraq, in Erbil, and to have lunch with him—as was my adviser, Ninos Aaron—and to talk about the plight of Assyrians in Iraq. I pay tribute to him because he has announced, rather unusually for a patriarch, his retirement from the office due to ill health. The election of a new patriarch will occur later in the year, and we look forward to welcoming that new patriarch, after their election, to Australia, I have no doubt, fairly early in their reign.

I also want to take this opportunity to pay tribute to Assyrian leaders in Australia, particularly Hermiz Shahen and David David, who lead the Assyrian National Council. They join us in the chamber today, together with other leaders of the Australian Assyrian community. It does not matter what the organisation is called or what letters go into the organisation; what matters is what’s in their heart, and what’s in their heart is leadership of the Assyrian people. I welcome them and thank them for their generations of leadership of the Assyrian people.

I also want to thank the member for Fowler, who will second this motion, and his longstanding commitment to the Assyrian people in his time in this House, which will, as he has announced, soon come to an end. I know the Assyrian people would want me to thank him for his leadership. I thank in advance those honourable members opposite for what I expect to be their support of the Assyrian people as well. 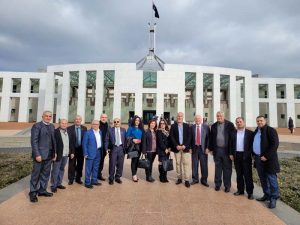 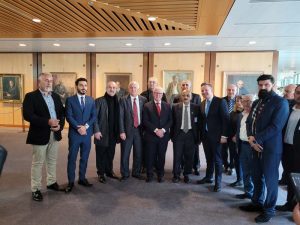