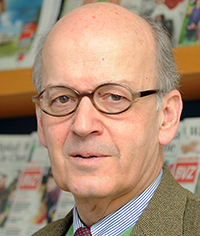 By Fionn Shiner THE international president of a leading Catholic charity has expressed sorrow at the violence that has killed more than 242 people in the Holy Land as well as hope that the ceasefire struck early today (Friday, 21st May) will hold.

Thomas Heine-Geldern of Aid to the Church in Need (ACN), spoke of his sadness about the violence between Israel and Hamas in which, according to reports, more than 230 Palestinians were killed by Israeli bombs and 12 Israelis died in Palestinian rocket attacks.

Highlighting the “hatred and darkness” that erupted during the conflict, Dr Heine-Geldern, Executive President of ACN (International) said: “So much blood has been spilt, so many hopes buried, so many lives shattered.

“The coming hours and days will show whether a ceasefire will hold.”

The conflict, widely considered the worst the region has seen since the 2014 war, began on 14th May, when, following weeks of protests by Palestinians, Israeli troops stormed the al-Aqsa mosque, the third holiest shrine in Islam, during Ramadan.

“We call on all our benefactors to respond to the appeal of the Holy Father Pope Francis, and the Latin Patriarch of Jerusalem, Archbishop Pierbattista Pizzaballa, and to pray during this festive season for peace and justice in the Holy Land.”

The “mutual and simultaneous” ceasefire began at 2am on Friday (21st May) with Egypt playing an influential role in brokering an agreement between Hamas and Israel.

Two Egyptian security delegations will monitor Israel and Gaza to ensure the ceasefire is upheld.

Dr Heine-Geldern called on politicians to be guided by a desire for peace and reconciliation.

He said: “May the Holy Spirit enlighten and guide all decision-makers, in Israel and Palestinian Territories and throughout the world, and help them find a way to overcome the division and hatred.

He added: “Let us pray to him for the consolation of all those in the Holy Land who have lost a loved one.”