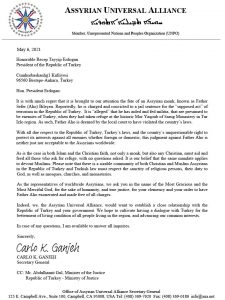 May 6, 2021 Honorable Recep Tayyip Erdogan  President of the Republic of TurkeyCumhurbaskanhg1 Kulliyesi 96560 Bestepe-Ankara, Turkey  Hon. President Erdogan: It is with much regret that it is brought to our attention the fate of an Assyrian monk, known as Father Sefer (Aho) Bileçen. Reportedly, he is charged and convicted to a jail sentence for the “supposed act” of terrorism in the Republic of Turkey.  It is “alleged” that he has aided and fed militia, that are presumed to be enemies of Turkey, when they had taken refuge at the historic Mor Yaqoub of Sarug Monastery in Tur Izlo region. As such, Father Aho is deemed by the local court to have violated the country’s laws.

With all due respect to the Republic of Turkey, Turkey’s laws, and the country’s unquestionable right to protect its interests against all enemies whether foreign or domestic, this judgment against Father Aho is neither just nor acceptable to the Assyrians worldwide.

As is the case in both Islam and the Christian faith, not only a monk, but also any Christian, must aid and feed all those who ask for refuge, with no questions asked. It is our belief that the same mandate applies to devout Muslims. Please note that there is a sizable community of both Christian and Muslim Assyrians in the Republic of Turkey and Turkish law must respect the sanctity of religious persons, their duty to God, as well as mosques, churches, and monasteries.

As the representatives of worldwide Assyrians, we ask you in the name of the Most Gracious and the Most Merciful God, for the sake of humanity, and true justice, for your clemency and your order to have Father Aho exonerated and made free of all charges.

Indeed, we, the Assyrian Universal Alliance, would want to establish a close relationship with the Republic of Turkey and your government. We hope to cultivate having a dialogue with Turkey for the betterment of living condition of all people living in the region, and advancing our common interests.

In case of any questions, I am available to answer all inquiries.

Republic of Turkey – Ministry of Justice