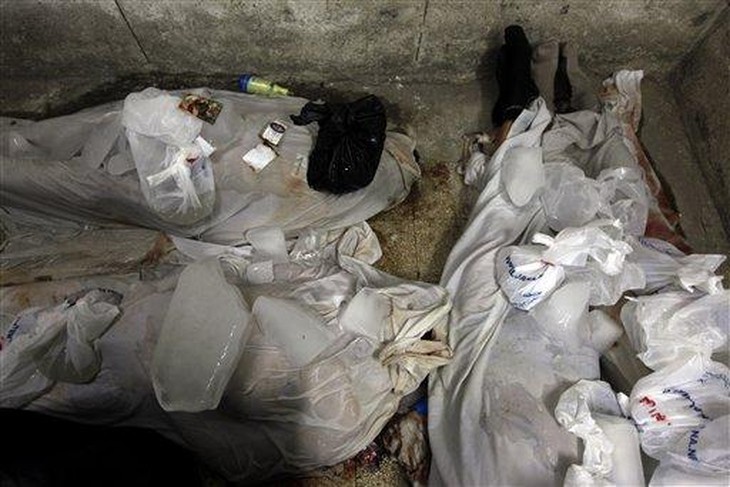 By Raymond Ibrahim
Khalil Hamra
The Islamic State in Sinai recently executed another Christian on video. In a clip recorded before the execution, the slain Copt, Nabil H. Salama, 62, “confessed” to his crime: building the only church in Bir al-Abd in Sinai—a church that was supposedly “cooperating with the Egyptian army’s and intelligence’s war on the Islamic State.”

Although Salama offered this “confession” only after being tortured—after his front teeth were busted out of his mouth—the charge that Coptic churches are actively and nefariously working to undermine the Islamic order is as widespread among Egypt’s Islamists as it is constantly morphing in absurd directions.

Thus, in an unrestrained tirade back in 2010, Muhammad Salim al-Awwa, former secretary-general of the International Union for Muslim Scholars, appeared on Al-Jazeera and accused the Copts, not of “cooperating” with the Egyptian military, but of “stocking arms and ammunitions in their churches and monasteries”—imported from Israel no less, “the heart of the Coptic Cause”—and “preparing to wage war against Muslims.” He warned that if nothing is done the “country will burn” and incited Muslims to “counteract the strength of the [Coptic] Church.”

The fact is, Muslim terrorists are notorious for offering any number of pretexts—many of which border on the absurd—to justify their cowardly targeting and murdering of Christians, in and out of Egypt. The Islamic State cited “grievances” to justify its grisly slaughter of 21 Christians—20 Copts and one Ghanaian—on the shores of Libya in 2015. An article in Dabiq, the Islamic State’s online magazine in English, titled “Revenge for the Muslimat [Muslim women] Persecuted by the Coptic Crusaders of Egypt,” claimed that the 21 Christians were slaughtered in “revenge” for two Coptic women who, back in 2010 and according to Islamic propaganda, were compelled by Egypt’s Coptic Orthodox Church to recant their conversion to Islam and return to Christianity.

Indeed, the late Coptic Pope Shenouda III, who was then nearly 90 years old and immobile, was portrayed as “a U.S. agent, an abductor and torturer of female Muslim converts from Christianity, who was stockpiling weapons in monasteries and churches with a view to waging war against the Muslims and dividing Egypt to create a Coptic State.”

The Islamic State also cited the 2010 bombing of Our Lady of Salvation Church in Baghdad as a product of “revenge” for those same supposedly forced-to-reconvert-back-to-Christianity women in Egypt. Then, armed jihadis had stormed the Iraqi church during worship service, opened fire indiscriminately, before detonating their suicide vests, which were “filled with ball bearings to kill as many people as possible.” Nearly 60 Christians—including women, children, and even babies (pictures of aftermath here)—were slaughtered.

Nor is this blame-the-victim strategy limited to Egypt. Speaking two days after a series of bombings rocked Sri Lanka on Easter Sunday, 2017, killing 359 people, a junior defense minister said that the attack “was in retaliation for the attack against Muslims in Christchurch,” where a New Zealand man killed around 50 Muslims in two mosques.

Two points give the lie to all such claims of Islamic “retaliation” due to “grievances.”

First, what did the Iraqi Christians of Our Lady Church, or the one decapitated Ghanaian, have to do with the imagined crimes of the Coptic Church? For that matter, what do Christians in the Middle East, Africa and Asia have to do with the secular West? Whenever the latter somehow offends Muslims—whether by publishing cartoons or launching military operations in Afghanistan—Muslims “respond” by terrorizing the Christian minorities in their midst. What exactly do brown Sri Lankan Christians celebrating Easter have to do with a white terrorist in New Zealand? Moreover, if the Easter day attack was a form of retaliation, what explains the fact that Muslims bomb churches on virtually every Easter (most recently in Indonesia).

Which leads to the second point: since when did Islamic terrorists that regularly preach hate for the other ever need a reason or excuse to make the lives of non-Muslims, chief among them Christians, miserable? For instance, since July 2011, I have been compiling monthly “Muslim Persecution of Christians” reports (published by Gatestone Institute). In virtually every one of these monthly reports, Muslims bomb, burn, or ban churches and generally terrorize Christians. Are we seriously to believe this is all due to Muslim “grievances” against the disempowered Christian minorities in their midst?

Indeed, even in the most recent murder, that of Nabil Salama, the Copt in Sinai, his murderers, perhaps inadvertently, let escape the truth behind their animus. In his execution video, Salama appears on his knees, with three men holding rifles standing behind him. The one in the middle launches into a typical jihadi diatribe: “All praise to Allah, who ordered his slaves [Muslims] to fight and who assigned humiliation onto the infidels” — this latter part is said while the terrorist contemptuously points at the bound and kneeling man before him — “until they pay the jizya while feeling utterly subdued.”

In short, all “grievances” cited by those Muslims who terrorize already disenfranchised religious minorities in their midst are false and meant to “legitimize” their otherwise cowardly and atrocious deeds.