Sydney April 14, 2021
We write to inform Assyrians in Australia and the world about the name change of our former organisation (AUA INC) and our proceedings in the Supreme Court of NSW.
As you are aware, we have been active members in the Assyrian Community for decades including as the Australian Chapter representatives of the global body of the Assyrian Universal Alliance. We have also been officers of an association incorporated in NSW known as Assyrian Universal Alliance Australia Incorporated (AUA INC).

In mid-December 2020, we discovered that the bank accounts of AUA INC and its mailbox had been seized by three persons, Ms Loubeh David, Mr Simon Essavian and Mr Albert Mooshi, persons who had been, invalidly and unconstitutionally, appointed as representatives of the Australian Chapter of the global Assyrian Universal Alliance. In that process. We also learned that Ms Loubeh David had signed a false declaration with the Department of Fair Trading, claiming that she was appointed as the public officer of AUA INC and that Hermiz Shahen, who had been the public officer since March 2010, was removed from that position.

Lawyers retained by us wrote to Ms Loubeh David, Mr Simon Essavian and Mr Albert Mooshi requiring them to return the assets of AUA INC and to rectify the records with the Department of Fair Trading and received no response. Consequently, there was no alternative but to commence proceedings in the Supreme Court, initially seeking interlocutory orders; subsequently the proceedings were set down for an urgent hearing on 11 and 12 March 2021.

On 25 February 2021, the matter was settled, and a copy of the sealed Orders are attached.

We consider the settlement favourable to us as it ordered, amongst other things, that the bank accounts and the mailbox taken from AUA INC be returned to AUA INC and declared that Hermiz Shahen is and always was the public officer of AUA INC.

Ms Loubeh David, Mr Simon Essavian and Mr Albert Mooshi have also been ordered to pay a contribution towards our costs in the amount of $55,000.00. Our costs of these proceedings are in fact far in excess of $55,000.00. However, we agreed to the said amount as a compromise because proceeding with the litigation required us to raise significantly more funds which we were able to do, but we were determined to avoid these unnecessary legal costs. Further, even if we won the case, which we were confident we would, would still require us to embark on the further step of assessing and recovering our costs which would have taken at least another year and it would have been a very financially and emotionally draining experience for us..


PO Box 34, Fairfield NSW 1860 Australia. Mobile: 0407 235349
Email: hermiz.shahen@ancau.org For more information visit our Website: www.ancau.org
As part of the settlement, we also agreed to change the name of AUA INC. On 7 March 2021, the members resolved to change the name of the NSW incorporated association to Assyrian National Council Australia Inc. We see this step as a positive development since we have been wanting to distance ourselves from the unconstitutional leadership of global body of the Assyrian Universal Alliance for some time now for many reasons, including its anti-Semitic announcements in 2020.

We kindly ask you to update your record to the current name and contact email address.

We are hopeful and believe that we can once again continue with our efforts in working for the benefit and the good of our community in a most effective and positive manner.

We thank you again for believing in and supporting us and we trust that we will once again prove to our local Assyrian community that your support has not been in vain. 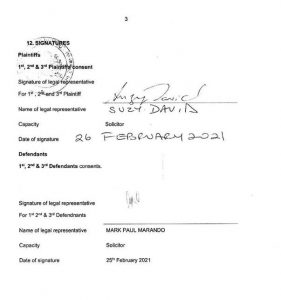 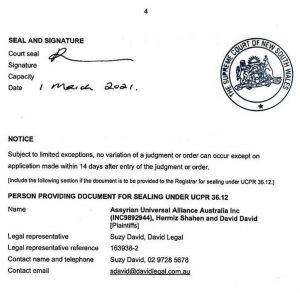 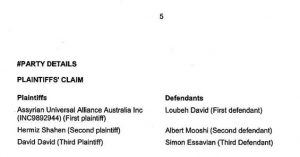