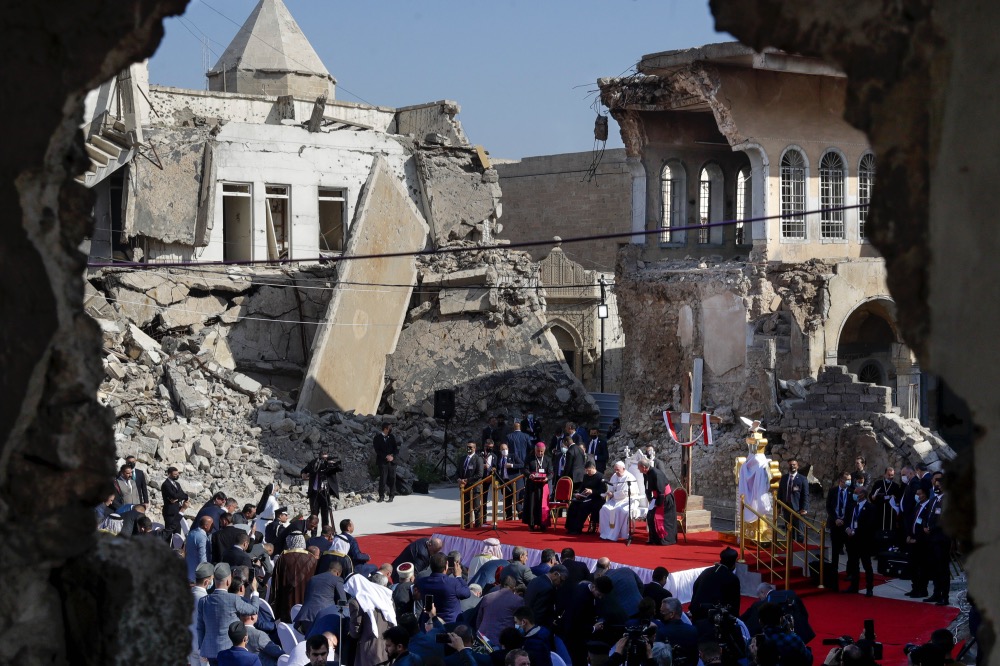 WEAM NAMOU :A group of Chaldean women, sitting around a kitchen table in Michigan on Sunday, watched on Arabic satellite TV as Pope Francis set foot in their ancestral land on the last full day of his historic papal visit to Iraq.

Pope Francis, surrounded by shells of destroyed churches, leads a prayer for the victims of war at Hosh al-Bieaa Church Square, in Mosul, Iraq, once the de-facto capital of the so-called Islamic State, on Sunday, 7th March. PICTURE: AP Photo/Andrew Medichini/File photo.

It was especially moving for the Christian Iraqi women to see the Roman pontiff in Mosul, the northern Iraq city from which the head of IS once declared its “caliphate.” Now, with the IS without territory and its leader dead, many of the Chaldeans who fled the city in 2014, along with other minorities, have not returned, including some who sat watching the pope on TV.

“The Iraqis received him like a king,” said Fereyal Breako, who was born in Tel Keppe, less than 16 kilometres from Mosul.

Breako said the last time she felt so personally touched by the Vatican was when Pope John Paul II sent her late husband, Saleem Yatooma, a certificate, blessing him and his family for providing his home as a church in the Muslim Iraqi city of Kut.

Many in the Chaldean Christian diaspora say they are happy about the pope’s brave and peaceful visit, and his urging as he arrived in Iraq that its “dwindling Christian community should have a more prominent role as citizens with full rights, freedoms, and responsibilities.”

But many also feel that Francis’ trip and his sentiments come too late, noting that few Chaldeans are left in the region. “There’s no good in visiting us in Iraq,” wrote Zuhayr Jamil Menjou, a Christian Iraqi activist based in London, in a February letter to Middle Eastern media and organisations. “The need for knights on horses is gone.”

The Chaldeans have occupied what was once Mesopotamia, the setting for the Bible’s Book of Genesis, for 5,000 years and were among the first people to be converted to Christianity. In the fifth century, they followed Nestorius, the Christian patriarch of Constantinople who was declared a heretic by Rome for teaching that Jesus Christ was not concurrently God and man.

This split lasted until 1445, when some Chaldeans were received into the Roman Church by Pope Eugenius IV. Searching for an appropriate name to call this new Catholic rite, the Pope focused on their historic homeland, which in ancient times was Ur of the Chaldeas. They were permitted to retain their historic rituals and the Chaldean/Aramaic language for Mass and other ceremonies.

Today, Chaldeans still speak Aramaic, the language spoken widely across the Middle East in Jesus’ time, though the tongue is threatened as Chaldeans flee persecution in Iraq and elders die.

The people, too, are increasingly at risk of extinction. Before the Gulf War in 1991, Christian Iraqis numbered about one million. By the time of the US-led invasion in 2003, that figure had fallen to about 800,000. The spread of IS forces across northern Iraq has resulted in widespread displacement of the community. In Breako’s hometown, which once had close to 10,000 Chaldeans, only 20 families remain.

Many families migrated to the United States, settling mostly in Michigan, where they have come since the early 20 century, before the British changed the name of their colonial holding of Mesopotamia to Iraq.

The pioneers came to Michigan because there were already Arabic-speaking Lebanese and Syrian immigrant communities there. While early immigrants came for economic opportunity, especially in Detroit’s booming auto industry, more recent arrivals are escaping religious persecution. Today, Michigan has the largest Chaldean community in the world, with a population of over 160,000.

Amer Hanna-Fatuhi, an artist and scholar based in Michigan and author of The Untold Story of Native Iraqis, credited the Pope’s visit with two positive impacts.

“From a religious perspective, it brought awareness to the Iraqi Christians,” said Fatuhi, “which may prompt the international community to help build churches, restore damaged areas and develop tourism, especially to the ancient city of Ur,” one of Francis’ key stops.

“From a secular perspective, this has put Iraq on the map again as the cradle of civilisation,” Fatuhi added.

But Fatuhi, more conspiratorially, questioned the timing and purpose behind the visit. “It was said that Pope John Paul II didn’t come to Iraq because it was not secure, but during Saddam’s days, it was more secure than it is today. Back then, the Pope’s visit would’ve had a great impact on Chaldeans.

“But it’s this Pope who made it happen,” he said.

Whatever prompted his visit, others say, the Pope’s words would hold greater weight had he called for Christian Iraqis to be provided not only protection but restoration and compensation for their suffering and property that was illegally taken from them.

Menjou wrote, “We don’t want beautiful words and phrases of tolerance. If Christ comes today, he will not tolerate this injustice.”

Despite the criticism and concerns, Chaldeans are in general very happy to see Iraqis celebrate, something that has become a rare occurrence. They feel that Francis’ calling to end violence and extremism is an important unifying message, one that gives hope to all people around the world.