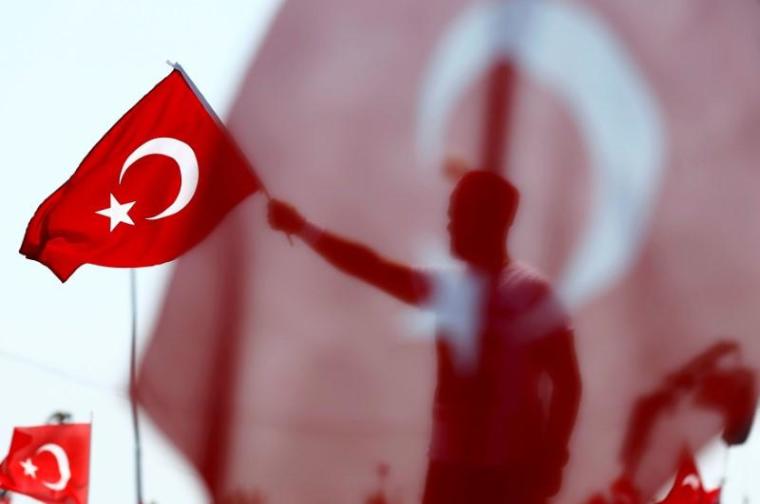 By Jackson Elliott, Christian Post
A man waves Turkey’s national flag during the Democracy and Martyrs Rally, organized by Turkish President Tayyip Erdogan, November 12, 2016. | (Photo: Reuters/Umit Bektas)
The Turkish government has made no progress in finding the kidnappers and killers of a Christian man and his wife after a full year, International Christian Concern reported.

On January 11, 2020, likely Kurdish militants kidnapped elderly Turkish Christians Hurmüz Diril and ?imuni Diril from the village of Mehr. On March 20, ?imuni’s son found her dead and dismembered in a river. Hurmüz’s fate remains unknown, and the government has not found the killers.

The pair’s son, Father Adday Ramzi Diril serves as a Catholic priest. He ministers to thousands of Iraqi refugees who live in Turkey.

Free CP Newsletters
Join over 250,000 others to get the top stories curated daily, plus special offers!
SUBMIT

FREE CP NEWSLETTERS
Join over 250,000 others to get the top stories curated daily, plus special offers!
SUBMIT

Witnesses told the Turkish government that the couple had been kidnapped by three members of the PKK, a Kurdish militant group designated by the U.S. State Department as a terrorist organization. Turkey and the PKK have long been in conflict.

The government never gave the Diril family autopsy results from ?imuni’s body, telling them she died by drowning. Authorities did not attempt a second search for the couple, said Evans.

“The autopsy report makes it seem like it was just water damage, but there’s more detail that can be shared,” she said. “We saw how she was found. It looks like it was a lot more than water. She was found dismembered, and there’s no answers to that. That’s a horrible way to find your mother. Why can’t the autopsy report answer that basic question?”

It is likely the government’s refusal to act or explain comes from political motives and the PKK has a history of kidnapping hostages to advance political goals against the government in Turkey, she noted. Turkey might have known who captured the couple and where they were, but refused to act in order to avoid embarrassment.

A Message from Edifi – Christian Podcast App
Looking For Inspiring Christian Podcasts to Grow Your Faith?
Edifi is a powerful app that aggregates thousands of the best Christian podcasts in one place. Cut through the noise and grow your faith by diving into the world’s top Christian podcasts. Find entertainment and inspiration. Download the FREE app today!
“In this area, when the PKK and Turkish conflict broke out, it was very common for Christians to be kidnapped during that conflict,” Evans said. “There’s a history of kidnapping them. There’s not necessarily a history of ransoming them. It could be the Turkish government knows something they’re not saying.”

Often, it can be in the best interest of Turkey’s government for terrorist groups to remain uncaught, she contended. When citizens fear outside threats, leaders can justify stronger authoritarian control.

“The government is very much trying to control narratives,” she said. “The Turkish government has long viewed the issue of the PKK as a way to keep itself in power. There’s this history in Turkey of not completing investigations. By keeping it in a state of uncertainty, they can justify their decisions.”

Muslim Turks persecute Christians more now than they did in the recent past, said Evans. Turkey has a long history of Christian persecution, and its government still refuses to admit that the Ottoman Turks committed genocide of Christian Armenians in 1915.

Turkey is 99% Muslim, according to its own statistics. Although its constitution provides for freedom of religion, the government uses regulations that demand the registration of religious groups to make it more difficult to practice non-Islamic faiths. Popular hatred toward Christians and Jews in the country often leads to discrimination, stigmatization and attacks.

In July 2020, Turkey President Recep Tayyip Erdogan turned the Hagia Sophia, an ancient Christian cathedral, from a museum into a mosque, undoing its transformation in 1934 from a mosque to a cathedral.

Evans believes that the Turkish government’s refusal to find the kidnappers of a Christian couple signals that it doesn’t care what happens to Christians.

“Turkey is not like other countries where you have a huge bombing targeting a church. It’s much more subtle. Every day when you go to work, people call you a rat or a dog because you’re an Armenian Christian,” she said. “It’s definitely getting worse.”