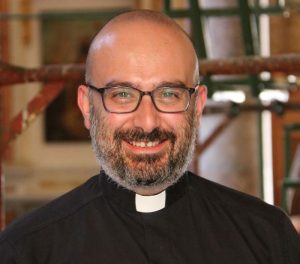 By Fionn Shiner HUNDREDS of thousands of Christians are trying to leave Lebanon after last August’s explosion, raising fears for the future of the Church there. In an interview with Catholic charity Aid to the Church in Need (ACN), Father Jad Chlouk, parish priest at Beirut’s Maronite Cathedral of Saint George, said Christians feel alienated from their homeland.

Father Chlouk, 38, said: “The statistics show that more than 380,000 requests for immigration were presented to the embassies of the EU and countries of North America, and that most of them were from Christians, who unfortunately now feel like strangers in their own home country.

“This is negatively affecting the whole Christian community, because it is losing most of its brightest and best, and especially its young people, who are supposed to be the future of the Christians here.

“Hence, the number of Christians in the country is decreasing day by day, and this is badly affecting the situation and causing still more pressure for those who remain, in a situation where they might soon suffer from persecution.”

Lebanese media has reported that around 380,000 immigration applications have been made following the explosion. Father Chlouk stressed how across the Middle East Christian numbers have plummeted.

Father Chlouk said: “This is not a conspiracy theory – this is the reality that we have witnessed in our closest neighbours, including Syria, Iraq, Palestine, Jordan.”

ACN has supported Lebanon’s beleaguered Christian community with more than €5 (£4.53) million in aid following the 4th August 2020 explosion in Beirut.

This includes repairs for church buildings in the immediate vicinity of the blast, which caused serious damage to the capital’s historic Christian quarter – and Father Chlouk gave an update on the reconstruction of the capital’s Maronite Cathedral, which started a month ago.

He said: “We expect to finish fixing the roof in a couple of weeks, while as for the other openings, the fixing of the damaged windows and doors, this work is still in progress.”

Father Chlouk ended by saying there were still reasons for optimism.

He said: “Hope is always our daily bread, especially in these dark times.

“Despite everything, we look towards the future with hope, because we know that our Lord Jesus Christ is the master of history, and that in his hands lie all our history and life.”