“Every effort — be it large or small — to promote the peace process is like placing a brick in the construction of a just society, one that is open to welcoming and where everyone can find a place to live in peace,” Francis said in the video released Thursday (Dec. 10).

The video message was addressed to an online meeting organized by the Vatican’s Department for Integral Human Development on the challenges faced by the Syrian and Iraqi people. In attendance were representatives of about 50 Catholic charities and local church representatives.

On Monday, the Vatican announced that Francis will make his first papal visit since the onset of the pandemic, visiting the Iraqi cities of Baghdad, Irbil, Mosul and Qaraqosh. The March 5-8 visit will fulfill Francis’ long-sought aspiration to be the first pope to visit Iraq.

The schedule also includes a visit to the plain of Ur, in what was once Mesopotamia, the home of the biblical patriarch Abraham. “Seeing Abraham’s house will be a great symbol of unity for all religions that have this element in common,” said Auxiliary Bishop Basel Yaldo of Baghdad, in an interview with AsiaNews this week.

The pope’s appearance in Mosul, the Islamic State’s bastion until 2017, will give him the opportunity to pray for the many victims of “jihadists madness” in the country, said Yaldo. Christians in Iraq have paid a high price for choosing to remain in what can still be hostile territory for non-Muslims.

In 2003, before the U.S. invasion of Iraq, there were an estimated 1.4 million Christians in Iraq. Now that number has dropped to just over 300,000, with many choosing to flee after years of persecution and war from the Nineveh Plains, the cradle of Christianity in the Middle East. 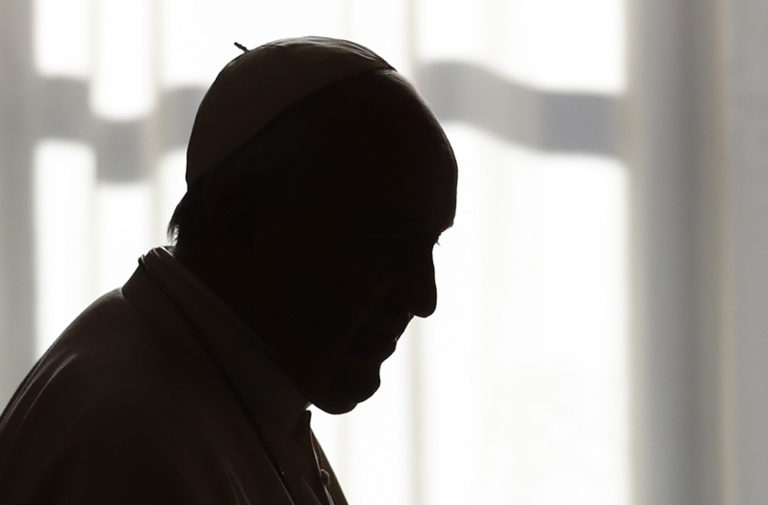 Pope Francis is silhouetted during a private audience at the Vatican on Dec. 14, 2019. (Yara Nardi/Pool photo via AP)
Francis has issued repeated appeals to help the local Christian communities rebuild and prosper in their historic home, and his visit will likely push this agenda.

“We must ensure that the Christian presence in these lands continues to be what it has always been: a sign of peace, progress, development and reconciliation among individuals and peoples,” Francis said in the video Thursday.

The Chaldean patriarch, Cardinal Louis Raphael Sako, said the pope’s visit is “a great gift to Iraq, to its people and to all the Middle East.” Speaking to the media outlet of the Italian Bishops’ Conference, Sako said the trip “will be a message of brotherhood, a call for harmony, solidarity and peace.”

The visit will build on the joint Declaration on Human Fraternity for World Peace and Living Together, which Francis and the grand imam of Al-Azhar, Sheikh Ahmed el-Tayeb, signed in Abu Dhabi in 2019.

In his message, Francis appealed to the international community to help displaced Iraqis return home by addressing the violence, corruption and poverty that have plagued the country.

He also encouraged the work of the many Catholic charitable organizations active in Iraq and across the Middle East, especially in helping immigrants and refugees. Repeating one of his slogans, the pope reminded these organizations that “the church is not an NGO” and that their work must be inspired by the gospel.

“This help must be a tangible sign of charity by a local church helping another church that is suffering, with the incredible tools of Catholic agencies for humanitarian aid and development,” he concluded.