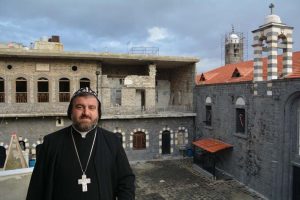 More help is urgently needed to encourage Christians to stay in Syria, according to a leading archbishop who has said that security problems, job instability and poor living conditions have left people “feeling like strangers in their own country”. In a Holy Week interview with Catholic charity Aid to the Church in Need, Syriac Orthodox Archbishop Selwanos Petros Al-Nemeh of Homs and Hama said that about 50 percent of Christians had left Syria since the outbreak of the conflict in 2011. Photo: Archbishop Selwanos Al-Nemeh of Homs and Hama, January 2018

By Maria Lozano and John Newton A LEADING Catholic charity has paid tribute to an archbishop who died after “suffering with his people and for his people” as they endured one of the worst conflicts of the Syrian civil war.

Over seven years, the archbishop partnered with Aid to the Church in Need (ACN) in nearly 40 projects providing emergency relief and pastoral aid as much of Homs was bomb-blasted during a three-year siege which finally ended in May 2014.

At the height of the conflict, the archbishop was forced to evacuate to nearby Fairouzeh, a village outside Homs, after his house was destroyed.

His brother died after a bomb hit the city’s Melkite Greek Catholic cathedral.

Undaunted, Archbishop Alnemeh was among the first to return to Homs and led ACN relief work including food and sanitary packages, school scholarships, a children’s nursery, repairs to damaged homes and restoration of his cathedral of St Mary of the Holy Belt which is said to date back to 50AD.

Working with ACN, in 2016 Archbishop Alnemeh travelled to Geneva and Brussels to call on the international community to help Christians fleeing Syria en masse because of persecution, conflict and extreme poverty.

Extending condolences to Syriac Orthodox Patriarch Ignatius Aphrem II, other bishops and faithful, ACN director of projects Regina Lynch described Archbishop Alnemeh as “a man who has suffered with his people and for his people.”

Ms Lynch highlighted the charity’s “close collaboration” with a man of “commitment and dedication,” adding: “He was undoubtedly a pillar, a pillar of resistance against hopelessness and a fighter to save his people.”

ACN UK’s John Pontifex, who met Archbishop Alnemeh in Homs on several occasions during the civil war, said: “You didn’t have to be with him long to realise that under his calm and composed exterior was a pastor passionate about serving his people enduring utterly unimaginable suffering.

“His own personal safety didn’t seem to matter to him. Apparently fearless and determined to rebuild a new Homs out of the rubble of the old, he was a shepherd willing to lay down his life for his flock.”

Born in 1968 in Saddad, a Christian town which was to suffer the massacre of 45 people in 2013, Archbishop Alnemeh said of himself: “I was raised an orphan. The Church was my mother.”

He studied theology in Athens, Greece, before being ordained Metropolitan Bishop in 1999. 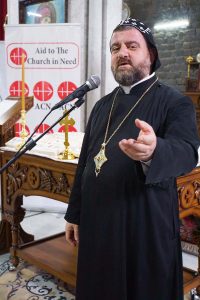 Syriac Orthodox Archbishop Selwanos Petros Al-Nemeh
“Jesus is my Rock” Ceremony – ACN broke ground on Tuesday, 1st May, in Homs, Syria, where nearly 100 destroyed homes will be repaired.
With “Jesus is my rock” ceremony on Tuesday noon, 1st May, the pontifical foundation Aid to the Church in Need begins the reconstruction of another 97 houses belonging to internally displaced Christian families from Homs in Syria. During the celebration in Um Al-Zehnar Syriac Orthodox Cathedral, the owners of the houses were each given a small piece of the rock reminding that Jesus is the rock, a stable fundament they can rely on and construct their future.