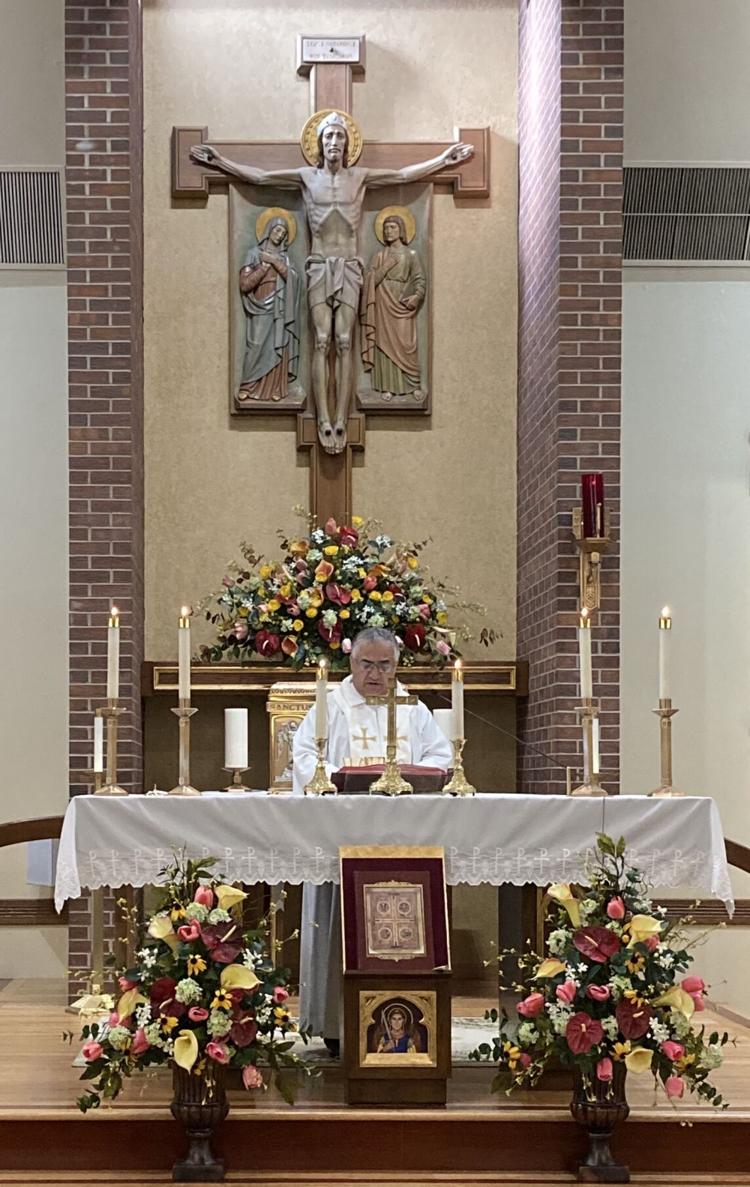 By Debbie Kelley debbie.
The Rev. El Badaoui Habib arrived at St. Rafka Maronite Catholic Church in Lakewood in May and is now offering Maronite Rite Mass the first Sunday of every month at St. Joseph Catholic Church in Colorado Springs.
When a priest consecrates, or makes holy, the bread and wine during a Maronite Rite Mass, he speaks in Aramaic, the spoken language of Jesus.

Hearing the words Jesus is said to have used when talking to his disciples during the Last Supper more than 2,000 years ago gives Colorado Springs resident Anita Joseph-Conkling goosebumps.

The practice is not only a throwback to her family’s Lebanese heritage but also provides meaning in contemporary times, she said.

“Having the traditions you grow up with are very dear to your heart; it is very emotional,” she said. “It gives you a state of meditation, and your connection with the Holy Spirit is strong.”

Last month, a Lebanese-born priest living near Denver started offering Mass in the Maronite Rite for the first time in Colorado Springs.

Masses are held the first Sunday of each month at 5 p.m. at St. Joseph Catholic Church, 1830 S. Corona Ave. The next service is Sept. 6.

Middle Eastern Catholics from Lebanon, Syria, Pakistan, Iraq, Iran, Palestine, Jordan, Armenia, Turkey and other countries, including the United States, are invited to attend. Social distancing, facial coverings and hand sanitization regulations under the COVID-19 pandemic are in place.

The Rev. El Badaoui Habib arrived at St. Rafka Maronite Catholic Church in Lakewood in May as parochial administrator for the congregation’s 190 families.

But the 70 miles seemed too far to travel for about 50 Colorado Springs families who prefer the Maronite Rite — which is more familiar to them than Roman Catholicism. So Habib is using space at St. Joseph for services.

“Maronite and Eastern Catholics in Colorado Springs are often folded into the larger Denver-based community, and it is an exceptional experience to be recognized as another viable and growing community,” said Joseph-Conkling, who helped establish St. Rafka’s in 2008 and has been key in forming the new congregation in Colorado Springs.

“People love it because the spirituality is very deep and very beautiful,” he said. “You feel very holy.”

The Maronite Rite is reminiscent of worship in early Christian services that were held in dark caves under a cloud of fear of Roman soldiers, Joseph-Conkling said.

The Mass is not different in purpose from the Roman Catholic version but differs in structure, she said.

“Everything is a tiny bit more ceremonial and traditional,” Joseph-Conkling said. “It has a more solemn feeling.”

Wafts of frankincense and myrrh incense are more pervasive, ancient prayers are recited from bilingual prayer books, the communion host is dipped into the wine, a kiss of peace is offered from the altar and other distinctions are evident.

“One woman at the Colorado Springs Mass was almost too emotional to express the beauty of hearing the prayers in her language for the first time in many years,” she said.

The pandemic has brought changes, such as receiving communion in the hand rather than the traditional on-the-tongue, separate microphones for speakers and elimination of the procession and altar servers.

Worshippers include people with Middle Eastern roots who were born in America, those who have been granted asylum here, professionals, small-business owners and extended families.

But all are familiar with the Maronite Rite, which has ancient origins tracing to Antioch, Turkey.

Followers of Maron, a Syriac priest and hermit monk who later attained sainthood, founded the Maronite movement after his death in 410. Maron’s spirituality was based on missionary work, healings and miracles, and his teachings advocated a monastic style of prayer.

For centuries, Maronites were the only Christians in the East who recognized the pope in Rome. They continue to be in full communion with the Catholic Church.

Before coming to Colorado a few months ago, Habib served Maronite Catholics in Lebanon, Israel and Johannesburg, South Africa, where he was the head of the country’s Maronites for a decade. In 2016, he relocated to Pennsylvania.

The local Maronite community is welcoming to all, Habib said.

“Even though we come from different countries, there is high respect and hospitality and interaction with each other,” he said.

It’s nothing like the anger that’s shown on the news about continued unrest in the Middle East, Joseph-Conkling said, as people protest government corruption, financial hardship and other societal problems.

“They are happy, friendly people here,” she said.

Poverty, suffering, unemployment and housing shortages are common in many of the native countries, Habib said.

“Once you experience the way people around the world worship, you have a greater understanding and more hospitable relationship for what other people are going through,” Joseph-Conkling said.

“It’s important to understand why people in the Middle East tend to be protective of their religion, whether it be Judaism, Islam or Christianity. It’s so much more a part of their lives.”