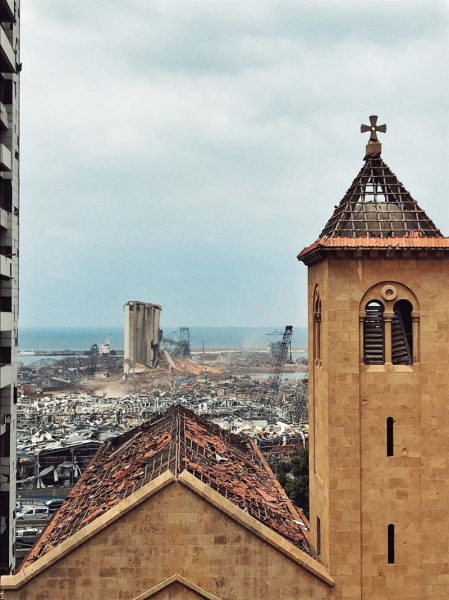 Following the horrendous explosion that hit Beirut devastating the capital and plunging its people “into darkness, blood and pain”, the Middle East Council of Churches (MECC) issued a statement addressed to the churches of the world and to its partners, calling them to support the devastated Lebanese capital and its distressed people.

The statement started with a cry of hope, “Christ is risen indeed He is risen”. It went on to explain that “for two thousand years, Christians in the Middle East have been continuously proclaiming Christ’s Resurrection to express at the same time their faith and their confrontation with death, the greatest threat to humanity and creation. Due to its religious, cultural and commercial vivacity and its presence in the heart of the ancient world, their region did not really witness true peace except for intermittent periods. In fact, it was in most cases, a crossroad, a meeting place and starting point on the one hand, and an arena for conflicts and confrontations on the other.  Due to raging conflicts and wars, for more than half a century, the Middle East has tremendously suffered violence, extremism and killing, uprooting its inhabitants from their lands and displacing them, tampering with their fate, and undermining human dignity.”

“The tragedy stunned the entire world and shuddered the conscience of the people, pushing countries and organizations to rush to help this long-standing city and its distressed citizens.

Despite the many tragedies it has faced, Beirut never closed its doors to displaced Palestinians, Iraqis and Syrians … Instead, welcomed everyone in open arms and became a global forum for civilization, art, culture, education, remedy and tourism. Beirut suffered and continues to suffer from destruction, displacement and humiliation, but its great history, its rich cultural heritage, and the model of living together as an existential reality, regardless of religious, ethnic, political and intellectual affiliations, reflect and convey a unique mission.  Beirut is a Forum of peoples and civilizations, and Lebanese are a nation of inspiration and creativity,” reads the appeal.

“Beirut does not fear disasters. It is rather afraid of those who do not respect its status and mission and tamper with human dignity in its midst. This is not a valid way to build nations and care for citizens. Did Lebanon not bear enough corruption and mismanagement during the past centuries, leading to financial distress and eventually, to unprecedented levels of poverty and destitution? Isn’t it already suffocating because of unemployment, collapse of institutions and banking system and the spread of the Corona pandemic? The recent explosion destroyed the Lebanese people’s last hope of getting out of the crisis without external help. Today, Beirut is in desperate need of the others, its friends and supporters.”

The statement continued, “Rebuilding the stone is not enough. It is rather necessary to “rebuild” the human being who was wounded by the horror of evil and its destructive repercussions. It is necessary to reestablish the social cohesion between the people of Beirut and restore life, the living together, joy, literature and arts, far from political quotas and sectarian extremism. It is imperative to guarantee a sense of security for those who were traumatized by death.

Since its inception in 1974, the Middle East Council of Churches (MECC) has always stood by the oppressed and the desperate, the suffering and the victims of war. It stood by the victims of failed policies and natural disasters. It stood by Beirut during and after the civil war (1975-1990), the Israeli invasion of southern Lebanon in 1982, and in July war of 2006.  Today, it is also standing with Beirutis, mobilizing all its human and material capital, relying on its partners from around the world and on their support and backing.”

Through this statement, the Council launched an appeal to the churches of the world and their partner institutions to help Beirut and its people. It called on the member churches from all Middle Eastern countries to support Beirutis, heal their wounds, show solidarity and help their spiritual leaders to fulfill their human, moral and spiritual responsibilities. The Council also called on states, international institutions and peoples of the world to extend a helping hand and defend the afflicted and the innocents. In fact, it considered that “Today, every move, no matter how simple, every act of generosity, no matter how little, and every word of empathy, have a great human value and contribute to strengthening the fraternal bond between human beings.”

The Council also reiterated the basic principles that can restore Beirut’s mission and the dignity and life of its residents and called upon all officials to help establish firm rules aiming at advocating for mankind and its righteous causes in this city, detailing them through the following six ideas:

1- Human dignity transcends all ranks and sovereignties because human beings are created in the image and likeness of God. It primarily includes the right to life, freedom of expression and religion without compromising the dignity of the other.

2- The importance of revealing the truth and identifying the responsible will prevent the tragedy from repeating.  This is the basic right of all victims and of all the Lebanese people. Unless the truth is revealed, human beings will remain in danger of losing their human characteristic and raison d’être.

3-  Safeguarding religious freedom and difference of opinion, managing pluralism and diversity judiciously and wisely to prevent conflicts, is the way to achieve equal citizenship and a true sense of belonging that will restore the image of Beirut as a unique model of coexistence.

4- Maintaining the need for safety, security, work, food, medication and education as basic needs of human dignity as well as providing psychological and spiritual support for the victims and the traumatized, is renewing the human being as the essential component of the social fabric.

5- Launching a rapid rehabilitation project of demolished houses and historical buildings, will certainly contribute to the preservation of the social fabric of Beirut and its cultural and archaeological environment.

6- Establishing a sound political system in Lebanon which is not based on corruption as a means of exerting power, nor the impoverishment and starvation of the people as a means of accumulating wealth, nor violence as a means of silencing those who are claiming their legitimate rights. Good and just governance as well as care for the people, are the basis of state policy. The least that a true citizen can ask for is a proper establishment of the state, good governance and the accountability of those he elected to run his country and its affairs.

In conclusion, the Middle East Council of Churches called the world for prayers, for the innocent victims of the Beirut explosion, that this tragedy is not repeated nowhere in the world. It declared that “it believes that the Resurrection of Beirut is the responsibility of the Lebanese, for they only know how to rebuild it, preserving its mission, as they have done repeatedly throughout history”. It finally insisted on the fact that “Beirut is theirs! And they are the guardians!”, adding that “It is true that this tragedy hampered and shocked Beirutis, but the Lord of Hope is able to lighten this burden, enlighten them with Christ’s resurrection, planting the seeds of Hope in their hearts, and inspire them to hold on to their cry of faith, emanating from within their hearts, until they rise victorious over the evil and the death: Christ is indeed risen!”.