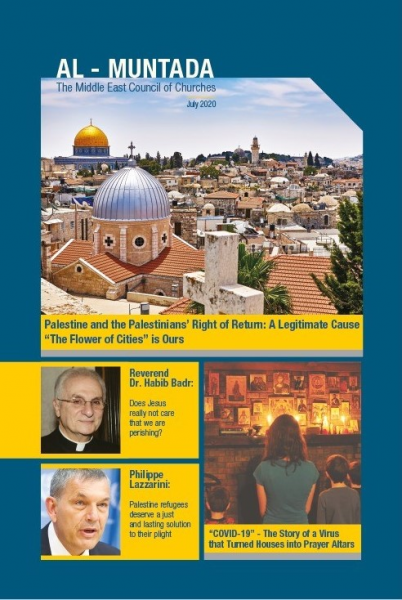 The letter of Rev. Habib Badr, president of the National Evangelical Union

in Lebanon and president of the council on behalf of the Evangelical family, entitled: Does Jesus really not care that we are perishing?
A foreword by Dr Souraya Bechealany, MECC secretary general, entitled: Has Jerusalem city of Peace and prayer been sold for thirty pieces of silver?

The call of the members of the MECC Executive Committee meeting from Cyprus:

“We call on Christians in this blessed Middle East to hold on to their lands,

their heritage and their identity”

A feature file entitled: Palestine and the Palestinians’ Right of Return: A Legitimate Cause. “The Flower of Cities” is Ours

This file includes:
An article by Metropolitan George Khodr entitled “The Man of Al Quds”

An interview with Philippe Lazzarini, Commissioner-General of the United Nations Relief and Works Agency for Palestine Refugees (UNRWA), in which he insists on the fact that “Palestine refugees deserve a just and

lasting solution to their plight”

An article entitled “Palestine and its Refugees… An Ethical Compass!” written by Ziad Sayegh, expert in Palestinian affairs, where he draws a roadmap focusing on the just return of refugees.

This file also includes a special report on the MECC Department of Service to Palestinian Refugees, entitled “More than 60 years of service to safeguard the dignity of refugees… until they return to their land”.

Churches (WCC) where he highlights that “The martyrdom and sacrifice of Eastern Christians remains a powerful inspiration for world Christianity”.

The second topic of the issue focuses on the top event during the current period, and is entitled: “In the Face of Covid-19: The Story of a Virus that Turned Houses into Prayer Altars”.

To read the electronic copy of the magazine, you can visit MECC’s website on https://www.mecc.org/