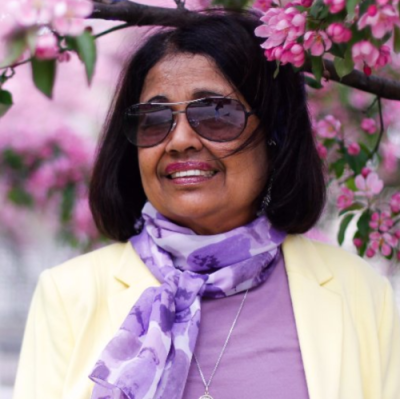 By Susan Korah, Op-Ed Contributor
Susan Korah is a Canadian journalist based in Ottawa and a Syriac Orthodox Christian. | Photo source: twitter.com/waterlilypool
Caught between two tectonic plates, Turkey has always been the epicenter of catastrophic earthquakes. This time an earthquake of a symbolic nature is in the making.

It has ominous implications for the minority Christian population — mainly Assyrians/Syriacs/ Chaldeans, Greeks and Armenians — within the country. The world beyond Turkey’s borders won’t escape unscathed, either.

The coming quake is already an audible rumble for most of the Western world’s governments and political leaders. Canada, alas, appears deaf so far to warning sounds of destabilization coming from Istanbul’s iconic Hagia Sophia (Church of the Divine Wisdom).

The ancient cathedral is a UNESCO World Heritage site and a magnet for millions of visitors from around the world. Much more, for 85 years it has served as neutral ground in Turkey’s contested religious space.

Yet, at the stroke of a Turkish court decision and a decree from President Recep Tayyip Erdogan, this historical and cultural treasure became a mosque. Once the greatest and most beautiful basilica in Christendom, it had previously been turned into a mosque when the Byzantine capital Constantinople (now Istanbul) fell to Turkish Muslim invaders in 1453. Since 1935, however, it has functioned as a museum on the orders of then Turkish leader Mustapha Kemal Ataturk.

President Erdogan would like the world to believe the reversion of Hagia Sophia to a mosque is a minor matter. It isn’t. Worldwide furor about it is already building. As a responsible member of the international community, Canada cannot afford to sit on the sidelines.

The move could well signal the launch of an aggressive campaign to take back possessions the dying Ottoman empire lost to European powers at the end of the First World War. If the campaign escalated, it would inevitably risk igniting another flare-up in Turkish-Greek relations. One more lethal layer would be added to the volatility of Middle Eastern politics.

I had followed the story for weeks and read the coffee dregs (a custom a Turkish friend introduced me to as the cultural equivalent of reading tea leaves). I had foreseen it as fait accompli for President Erdogan, whose celebration of the fall of Constantinople the Hagia Sophia on May 29 seemed a prelude to an unfolding drama of reviving 15th century antagonisms.

When the news broke, my heart broke too. Granting the status of a mosque to the cathedral, once the jewel in the crown of Byzantine Christianity, sends an ominous signal for Turkey’s Christian minority. It’s also a serious step backwards for any kind of rapprochement between Greece and Turkey.

From a Christian and aesthetic point of view, I fear its priceless mosaics, paintings and Christian symbols will be erased or defaced beyond recognition since visual representations of any kind are taboo in Islamic practice.

I have visited Istanbul and the Hagia Sophia four times during the last 10 years.  Each time, I was mesmerized by the ethereal beauty and architectural magnificence of the cathedral, which was built in 537 AD by the Byzantine emperor Justinian I. He is said to have declared upon its completion “Oh Solomon, I have surpassed thee,” referring to the Temple of Jerusalem.

“It may be a secular museum now,” I wrote after my first visit. “But this space is somehow sacred, a mirror of eternity. The mosaic of Christ Pantokrator (Almighty) appears to be watching us from above. With its lifelike face and piercing eyes, it is an incredible work of art that is nothing short of miraculous.”

Pope Benedict, on his visit to Istanbul in 2007, prayed that Turkey would be a bridge of collaboration between the peoples of the Islamic and Christian faiths. In 2014, Pope Francis, in a gesture of goodwill to the Islamic world, prayed along with the Grand Mufti (leader of the Muslim community) of Istanbul at the Blue Mosque, which is a short walk from the Hagia Sophia.

Now it seems the political winds in Turkey are blowing in a completely different direction. The papal vision of inter-faith harmony has been replaced by one of renewed antagonism between ultra right-wing nationalism/ religious fundamentalism and peaceful co-existence.

The changed status of Hagia Sophia can only deepen the interfaith divisions simmering below the surface in Turkish society.

While the move sits well with Erdogan’s support base of religious nationalists, opponents complain their voices have been silenced or ignored.

Orhan Pamuk, Turkey’s most celebrated author and winner of the Nobel Prize for literature in 2006, told BBC the decision would take away the “pride” some Turks had in being a uniquely secular Muslim nation.

A BBC article from July 10 quotes Pamuk as saying: “There are millions of secular Turks like me who are crying against this, but their voices are not heard.”

Long before the decree was issued, it was a foregone conclusion despite these dissenting voices.

“What can I say as a Christian clergyman and the Greek patriarch in Istanbul? Instead of uniting, a 1,500-year-old heritage is dividing us. I am saddened and shaken,” said Ecumenical Patriarch Bartholomew I, head of the Greek Orthodox Church, in the Washington Post on June 24.

Deeply troubling is the official language and symbolism used in the lead-up to the decree. These include the May 29 “celebration” of the 1453 conquest of Constantinople, ending an epic battle between the Christian emperor Constantine and the Ottoman Sultan Mehmet II.

Equally concerning was the internal messaging delivered through the Turkish media that the spoils of war, including the Hagia Sophia, rightfully belong to the Muslim heirs of the Ottoman Empire.

Christian sources in Turkey, who insisted on remaining anonymous, told Convivium all this represents a stirring up anti-Christian sentiments. They fear attacks by fundamentalists emboldened by the language of antagonism.

The provocation extends to the Greek Orthodox Church, and beyond it to the governments of Greece and Cyprus. In a joint press conference with Nicos Anastidades, President of Cyprus, Greek Prime Minister Kyriakos Mitsotakis has called for a comprehensive European response, including sanctions, to Turkey’s “unnecessary and petty” decision to reconvert Hagia Sophia into a mosque.

Both U.S. Secretary of State Mike Pompeo and the U.S. Ambassador at Large for Religious Freedom, Sam Brownback, have urged the Turkish government to maintain the site as a museum. Pope Francis has expressed deep pain and sorrow at its conversion to a mosque, as have other Christian leaders.

From Canada, the silence from official sources has been ear-splitting to say the least. Some civil society organizations are urging Prime Minister Justin Trudeau and Foreign Minister Francois-Philippe Champagne to take swift action.

“We have sent a letter to the Prime Minister to get on the world stage and send a clear message to Turkey that this is not acceptable, and that Turkey must abide by  UNESCO rules since the Hagia Sophia is a world heritage site,” Dr. Theodore Halatsis President of the Canadian Hellenic Congress told Convivium.

Halatsis added that more letters demanding action and co-signed by other organizations such as the Armenian National Committee of Canada are on their way to the Canadian government and to Audrey Azoulay, the director general of UNESCO.

The Canadian government should make this issue a high priority, and work with like-minded members of the international community to reach an acceptable compromise with Turkey.

If Minister Champagne and the bureaucrats at Global Affairs take the lead in crafting a response that gives President Erdogan room to reverse his decision without obviously bowing to international pressure, it would be an achievement worthy of the best Pearsonian diplomacy.

The opportunity to sustain Hagia Sophia as a jewel of inter-faith relations is also a chance for Canada to shine again on the world stage.

Susan Korah is a Canadian journalist based in Ottawa and a Syriac Orthodox Christian.  In the past few years she has focused on writing about persectued Christians in the Middle East.