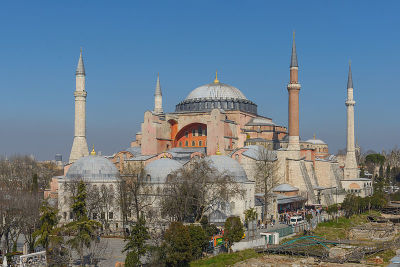 By Timothy Head, Voices Contributor |
The imposing structure of Hagia Sophia, located in Istanbul, Turkey. The building began as an Orthodox Christian cathedral, was converted to a mosque in the 15th century, and was then made into a museum in the 1930s. | (Photo: Arild Vågen/ Wikimedia Commons)
Turkish President Recep Tayyip Erdogan’s order last Friday to turn the Hagia Sophia from a secular museum into an active mosque not only flouts its importance as a Christian holy site but also puts in jeopardy the decades of religious dialogue and cooperation it has precipitated.

President Erdogan’s motive likely has very little to do with any deep sense of faith. Instead, he is clearly using the order to selfishly advance his own personal political agenda. His popularity among the Turkish people has been waning for several years, and this order appeals to his party’s conservative religious base.

The problem is that, for almost nine decades, the Hagia Sophia has been a symbol of peace in the region. As The Washington Post columnist Ishaan Tharoor eloquently put it, it has been “a monument to a universal legacy that transcends religion and underscored Istanbul’s place at the heart of different cultures and faiths.”

Making the building a mosque now is, essentially, a proclamation that this peace doesn’t matter to Erdogan. It follows a long string of aggressive and reckless moves, including his invasion of Syria, which resulted in the death, persecution and expulsion of Syrian Christians. It also imperils one of the world’s most sacred Christian sites, and, as Christians, we must speak out against it.

The Hagia Sophia was intended to be a church, not a mosque. It was built as an Eastern Orthodox basilica by the Emperor Justinian I in 537. Over the centuries, it was converted into a Roman Catholic cathedral, an Eastern Orthodox cathedral again, and then a mosque in 1453, when the Ottomans conquered Istanbul. Each conversion damaged or destroyed invaluable features of the site. Finally, in 1934, it was declared a museum by Turkey’s secularist modern founder, Mustafa Kemal Ataturk. Many of the stunning Christian mosaics that had been plastered over in the 1400s were uncovered, and the Muslim prayer niches were preserved so that the site could stand as a testament to peace instead of conflict. It became a World Heritage site in 1985.

Erdogan’s move has angered leaders around the world. UNESCO issued a statement asserting that the decision was made “without any form of dialogue or prior notice,” despite the fact that UNESCO’s Director-General shared concerns with the Republic of Turkey “in several letters.” Pope Francis spoke out against the decision as well, saying he was “deeply pained.” Turkish Nobel Prize-winning novelist Orhan Pamuk told the BBC on Friday that “to convert it back into a mosque is to say to the rest of the world, ‘Unfortunately, we are not secular anymore.’”

President Trump has not spoken out yet. But as this is certainly a political move by Erdogan, the world’s political leaders — especially Christian leaders — have a duty to take a stand against it. I urge President Trump to step in on this issue and demand that President Erdogan rescind his order.

The first Friday prayer service is scheduled for July 24. If the conversion goes forward, there could be great repercussions to Christians. For one, its breathtaking Christian mosaics of Jesus, Mary and other holy figures could be covered up. “For most of its history, Islam has had a deep aversion to the lifelike portrayal of animate beings, especially human beings,” explained The Economist in 2015, an aversion rooted in “Islam’s horror of idolatry.” In addition, Christians and other non-Muslims could be legally kept from entering certain parts of the site. It could also be closed completely to non-Muslims during times of prayer, or permanently.

The Hagia Sophia should be a place of prayer to all — not exclusively a place of Muslim prayer. Its conversion into a mosque ignores its original intent as a place of Christian worship. It also fuels instability in the region in a time when countries should be putting aside their differences and working together for the well-being of their citizens. Instead, Erdogan has taken advantage of a global tragedy for his own personal gain. I shudder to imagine what might come next.