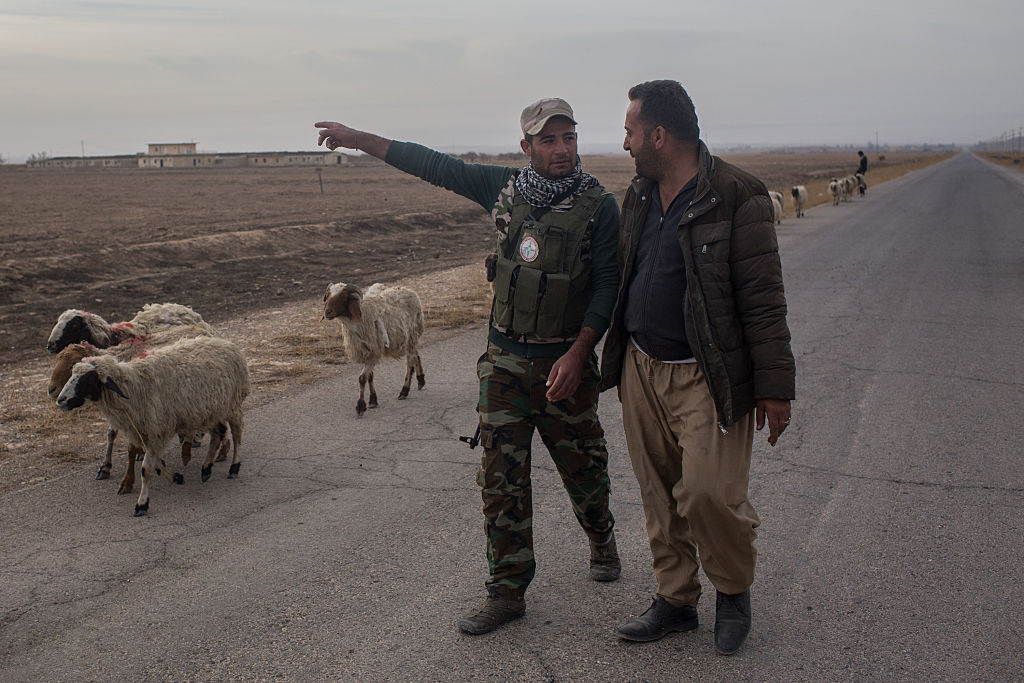 by Uzay Bulut
“In 2017, after the Nineveh Plains were liberated from ISIS, Iran’s influence started its increase. They now have allied support from Shiite groups in Baghdad… The presence of the Shia Shabak is expanding, particularly in the town of Bartella. They are taking over houses and properties that Christians who fled from ISIS terror left behind.” — Athra Kado, an Assyrian rights advocate, to Gatestone Institute.
“The US, for its national security, should consider Assyrians as its partners, arm and train them effectively as a strong force which will stand in the face of infiltrators.” — Juliana Taimoorazy, the founding president of the Iraqi Christian Relief Council, to Gatestone Institute.

In historically Christian areas post-Islamic State in northern Iraq, the growing influence of Iran, as well as demographic changes, are raising concerns in the local Christian community. Pictured: A soldier from the Assyrian Christian Nineveh Plain Protection Units talks with a man herding sheep near Qaraqosh, Iraq on November 15, 2016. (Photo by Chris McGrath/Getty Images)

In historically Christian areas post-Islamic State (ISIS) in northern Iraq, the growing influence of Iran, as well as demographic changes, are raising concerns in the local Christian community.

“Iranian pressure exists in the Nineveh Plains either in the areas that are inhabited by the Shia Shabak community or controlled by their militias,” Athra Kado, an Assyrian rights advocate and resident of the town of Alqosh in Iraq, told Gatestone.

Assyrians, the indigenous people of Iraq, make up a distinct ethnic community in the region. The Nineveh Plain is considered the ancient Assyrian heartland and is the only region in Iraq where the largest demographic group is Christian. Assyrians there even have their own security force, the Nineveh Plain Protection Units (NPU). The Nineveh plain currently, however, is mostly divided between the Shia militia and the Sunni Kurdish Peshmerga.

Zaid Kathawa, a member of the Iraqi Youth Parliament of the Iraqi Ministry of Youth and Sports, told Gatestone:

“The Iranian government’s proxies now control parts of the Nineveh Plains. They do everything in their power to prevent Assyrians from having seats in Iraq’s Parliament.

“In 2017, after the Nineveh Plains were liberated from ISIS, Iran’s influence began to increase. They now have allied support from Shiite groups in Baghdad. The 30th Brigade, which is composed of Shabaks, vehemently opposes the Christians of the Nineveh Plains. And the predominantly Shiite Sectarian Iraqi Government only supports the Shabaks in the region.”
Kado confirmed that “The presence of the Shia Shabak is expanding, particularly in the town of Bartella. They are taking over houses and properties that Christians who fled from ISIS terror left behind.”

What also makes the Nineveh Plains increasingly unstable is that many forces are now operating there: The Iraqi Army and proxy forces affiliated with Iran and the KRG (Kurdistan Regional Government) are vying for control of the area where they have competing interests.

Ashur Sargon Eskrya, the president of Assyrian Aid Society-Iraq, told Gatestone that Assyrians and other religious minorities such as the Yazidis, caught in the middle of these forces, have faced both physical violence and political marginalization.

“The demographic and cultural structure of the Nineveh Plains continues dramatically changing due to the increased Iranian domination, ongoing ISIS presence and the competing tensions between the central government of Iraq and the KRG,” he said.
Eskrya also pointed out the need to change the Iraqi constitution “to fit with religious freedom and human rights, accept the fact that Assyrians are the indigenous people of Iraq and enact laws to protect their rights.”

“The US government can provide political security and economic support to the Assyrians of Iraq by reuniting Nineveh plains, helping us establish self-administration of the Nineveh plain province, and build one united security force from the local community.”
Meanwhile, Iraq’s parliament approved a new government on May 7, thereby ending months of deadlock as the country battles an economic crisis, as former intelligence chief Mustafa al-Kadhimi was sworn in as prime minister.

U.S. President Donald Trump, according to the Associated Press, in a telephone call to Iraq’s new prime minister, said that the U.S. would be willing to provide Iraq with economic assistance.

As Iraq’s new cabinet is being formed, the Assyrian community and other religious minorities should not be forgotten, Kado emphasized:

“A concrete step that will provide the area with more political stability is to establish a new administration in the Nineveh plans that will be governed by its own indigenous people – without any outside political influence from Iraq’s KDP (Kurdistan Democratic Party), Iran, Saudis and others. That would finally give the native locals in Nineveh Plains some hope that they have a future in Iraq.”

“We are aware that this will not happen easily unless there is international support and supervision that will prevent the corrupt and dictatorial political forces in Iraq and Iran from trying to control the lands of Iraq’s persecuted, indigenous minorities.”
Among the most severely persecuted peoples of Iraq, according to the Assyrian Confederation of Europe, are Assyrians:

“Assyrians represent one of the most consistently targeted communities in Iraq throughout its modern history. This has included the state-sanctioned massacre at Simele in 1933; Saddam Hussein’s Anfal campaign, which included the targeting of Assyrian villages; ruthless campaigns of terror to which Christians were subjected following the U.S. invasion in 2003; and finally, the recent tragic chapter authored by the Islamic State (IS) jihadist organization.”
Juliana Taimoorazy, the founding president of the Iraqi Christian Relief Council, told Gatestone:

“The Islamic Republic of Iran’s reach through its Shia militia in the Nineveh Plain has severely affected Christians of Iraq: this is one of the main reasons why Christians in the post-ISIS era are not returning to their homes. And let us not forget that General Qaseem Soleimani’s strategy of dismantling ISIS as an institution was part of a larger Islamic Republic expansionist scheme to create its Shia crescent all the way to the Mediterranean. It intended to use the Nineveh Plain as a corridor to the West.”
As a solution to the chaos, Taimoorazy suggested:

“We must revisit history. In the 20th century, the Assyrians as great warriors have repeatedly saved Iraq from losing territory to the Ottomans and others. Today, the most secured areas in the southern Nineveh Plains are the areas where Christian armed military provides security. The U.S., for its national security, should consider Assyrians as its partners, arm and train them effectively as a strong force which will stand in the face of infiltrators.

“It is only after securing the vulnerable areas in a comprehensive way that the economic aid will enable Assyrians to return and build a safe new future.”
Uzay Bulut, a Turkish journalist, is a Distinguished Senior Fellow at the Gatestone Institute.