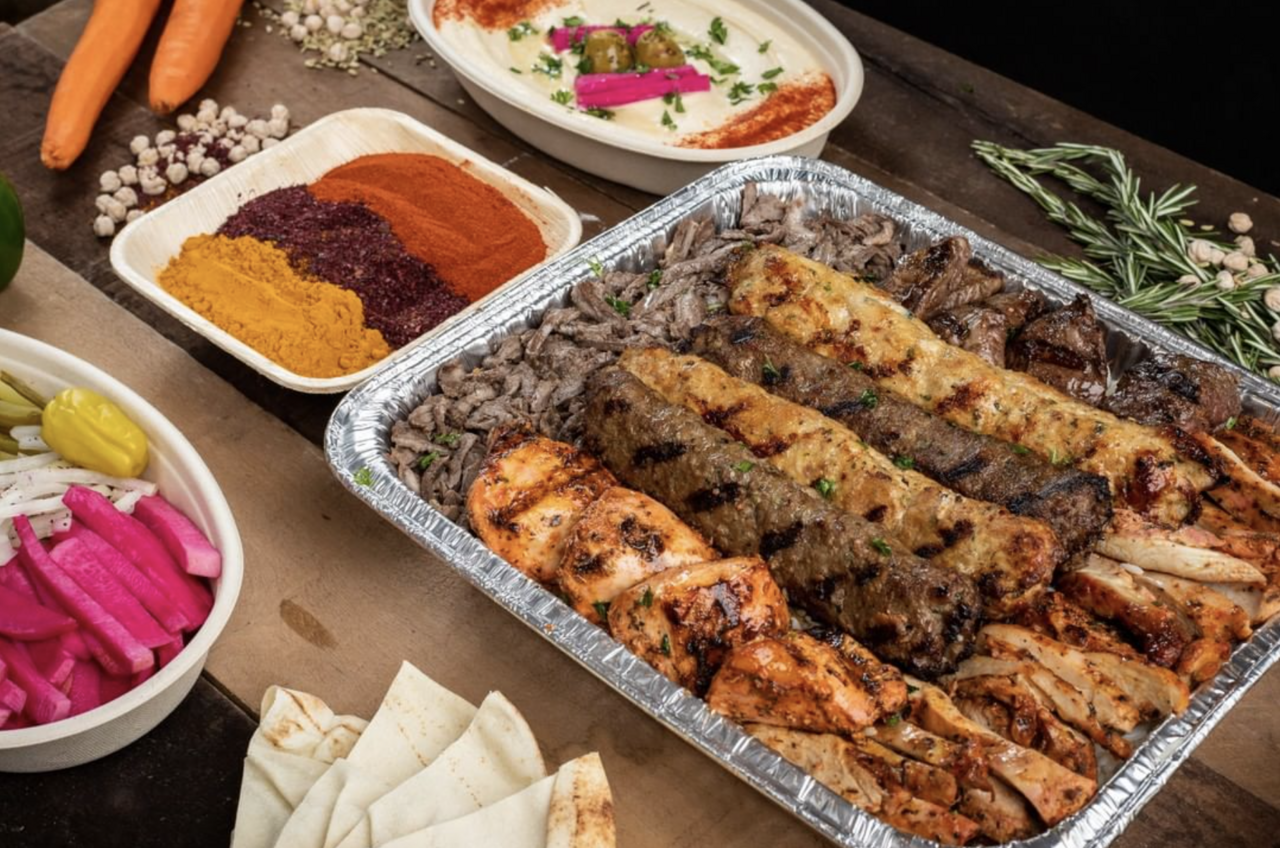 Known for their food, the city’s Chaldean diaspora wants to revive their restaurant scene.
by Priya Krishna
The food at Mr. Kabob, a Chaldean gas-station restaurant that is a short drive from Chaldean Town. Courtesy of The Chaldean News
For those who crave steaming bowls of fasoulia with plump beans and tomatoes and spit-kissed kofta skewers scented with allspice and cardamom, Sullaf is a haven.

A Chaldean restaurant, Sullaf specializes in the food of Iraqi Christians whose history dates back to ancient Mesopotamia. It is one of the world’s oldest cuisines, and Sullaf serves the world’s largest Chaldean diaspora, in Detroit, Michigan. But the area where the restaurant is located, known as Chaldean Town, has emptied out. What was once a bustling center for huge numbers of Chaldean immigrants and their families is suddenly a lot quieter.

Yet Sullaf isn’t the last stand of Chaldean food in this city. As Chaldean Town has disappeared, newer Chaldean neighborhoods have appeared in other parts of town. The community—now 160,000 strong, the largest outside of Iraq—has found other ways to exhibit their cuisine, and other places to plant their restaurants.

At a time when the community’s numbers are dwindling in Iraq due to the rise of ISIS and growing sectarian violence against Christians, food has become a way to share Chaldean culture in America. Within Detroit itself, which is home to some 300,000 people of Arab descent, Chaldeans view their food as a way to distinguish themselves, since the media often groups all Arab Americans under one umbrella. Perpetuating their unique culinary heritage is one of the most tangible and accessible means of letting people know that their way of life here is far from disappearing. 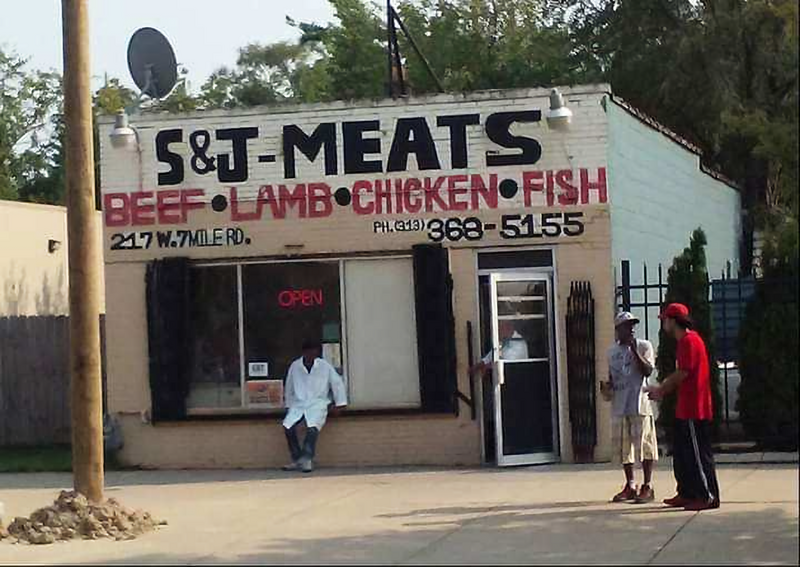 The owner of the Chaldean butcher shop was pessimistic about the future of Chaldean Town even before the COVID-19 pandemic. Courtesy Charlie Beaver
Related
How Basque Food Got to Northern Nevada
It all started with the Gold Rush.

“Food is such a huge part of us,” says Paul Jonna, the chief operating officer of the Chaldean Community Foundation. “The preservation of culture is important to any community, and so much of our culture is being surrounded by good food.”

Chaldean Town started developing in earnest in the 1970s and 1980s, when Chaldean immigrants arrived in droves, a result of changes to federal immigration policy and the Iran-Iraq War (Chaldeans have been living in Detroit since as early as the 1920s). The stretch on 7 Mile Road became populated with shops, bakeries, and restaurants specializing in Chaldean food. These restaurants played an important role in Chaldean Town, says Jane Shallal, a Chaldean-American living in Detroit who edited Ma Baseema, a cookbook about Chaldean cuisine, not only as gathering spots for the community, but as monuments to Chaldean culture.

“Chaldean culture is a very hospitable culture,” Shallal says. “Food is that welcoming tool, to get people to bond and become close.” Chaldean Town was a haven not just for Chaldean immigrants, but for all Detroit residents—Chaldean food became one of the city’s more popular cuisines among locals.

In Iraq, Chaldeans have long asserted their heritage by practicing their religion (Christianity) and speaking their language (Aramaic). But in America, Christianity is much more widely practiced, and Aramaic is globally on the verge of extinction. Cooking those distinctive Chaldean dishes, then, feels like an especially powerful declaration of identity. “We feel a strong need to keep our culture going,” Shallal says. Relative to other cultural touchstones, she adds, “our flavors are more distinguishable.”

“You are literally eating ancient recipes.”
Chaldean cuisine involves sword-like spears of heavily spiced meats, vast platters of rice, cozy stews of potato, leek, and eggplant seasoned with pepper and lemon and showers of herbs, and tangy, stuffed grape leaves. The format of the dishes share commonalities with that of neighboring countries, Shallal says, but the spicing is distinct.

“You are literally eating ancient recipes,” Jonna says—dishes born of both celebration and survival over centuries, from the days when Mesopotamia was the cradle of civilization. From this part of the world came the very first cookbooks, featuring recipes mostly for stews, etched in clay tablets. These dishes reflected how advanced Mesopotamian society was for its time—they involved making dough, adding spices, and using rendered fat as flavoring. Their land was fertile, supporting diverse produce and livestock, and they were in contact with nearby regions, enabling cross-cultural exchange.

That sense of purpose and community, Shallal says, extended to Chaldean Town. “In Iraq everybody is used to walking around town, so in that neighborhood, the houses were close together and everybody walked,” she says, whether it was to church or to dinner.

Chaldean Town’s restaurants “laid the foundation for people in the community,” she says. But in the ’90s, the area changed as the illegal drug trade soared, along with the crime rate. As the Chaldeans left, so, too, did the restaurants. “People got scared. Businesses couldn’t survive.” 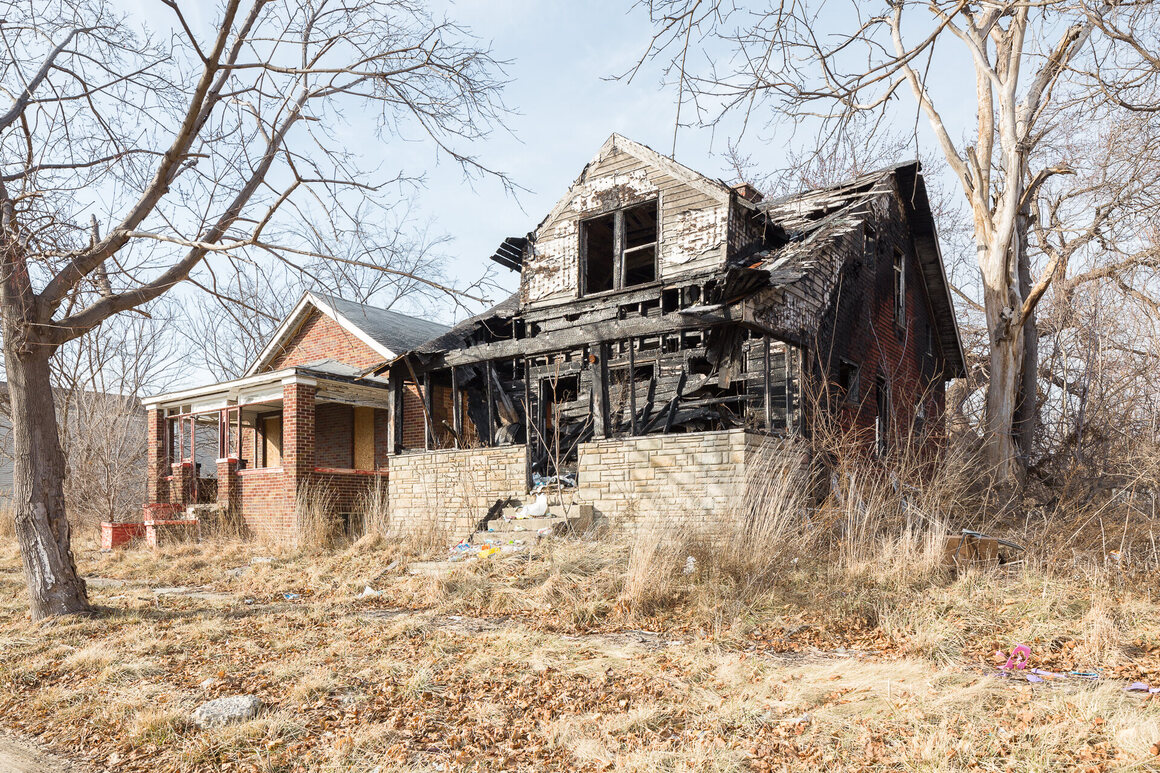 A shot of Chaldean Town in Detroit, which is not nearly as prosperous as it once was. Jason R. Woods
Charlie Beaver, who runs a nonprofit and lives in Chaldean Town (he is not of Chaldean descent), says that his Chaldean neighbors regularly tell him stories from when the neighborhood started deteriorating. “People say that 20 years ago you couldn’t walk down the street unless you were strapped,” he says. The empty houses fell into decay, and squatters and drug dealers moved in.

Beaver is a regular at Sullaf, and tries to promote it and the sole other Chaldean storefront still standing: S&J Meats. He created a Facebook page for the butcher shop and updates it himself.

But Joseph Kawa, who runs S&J Meats, is more pessimistic about his future in Chaldean Town. He started the business almost 16 years ago, and 90 percent of his clientele was Chaldean, he says. All the local coffee shops and restaurants bought product from him. Some Chaldeans who have moved across town still come to his shop, but most have stopped visiting.

“It is hard to bring people here because people are not going to drive here for one business or two businesses,” he says. “We are hanging in there, but I don’t know how long we will last.”

In the last few years, much of the Chaldean community has migrated to neighborhoods across town, namely Sterling Heights, 14 miles away. There, restaurant owners who used to have places in Chaldean Town have set up shop, hoping to capture the same success they had in their former locale.

Sahara, now a popular string of Chaldean restaurants, started on the intersection of 9 Mile road and Woodward, not far from Chaldean Town. It quickly grew a cult following—from Chaldeans and non-Chaldeans. People adored dishes such as gurgur, a comforting pot of beef cooked down with onions and bulgur.

“People would come late night and hang out all day, in and out,” says Zeana Attisha, who owns Sahara with her husband, Saad. “We stayed open until 4 in the morning, and it was always very busy.”

Once Chaldeans started migrating away from the area, they eventually shut down the original spot, and looked for other places to locate. After several requests from customers, they opened in Sterling Heights in 2004, which Attisha says emanates the energy of the original.

“It is just as busy,” she says, proudly. “It’s really loud,” and she prefers it that way. 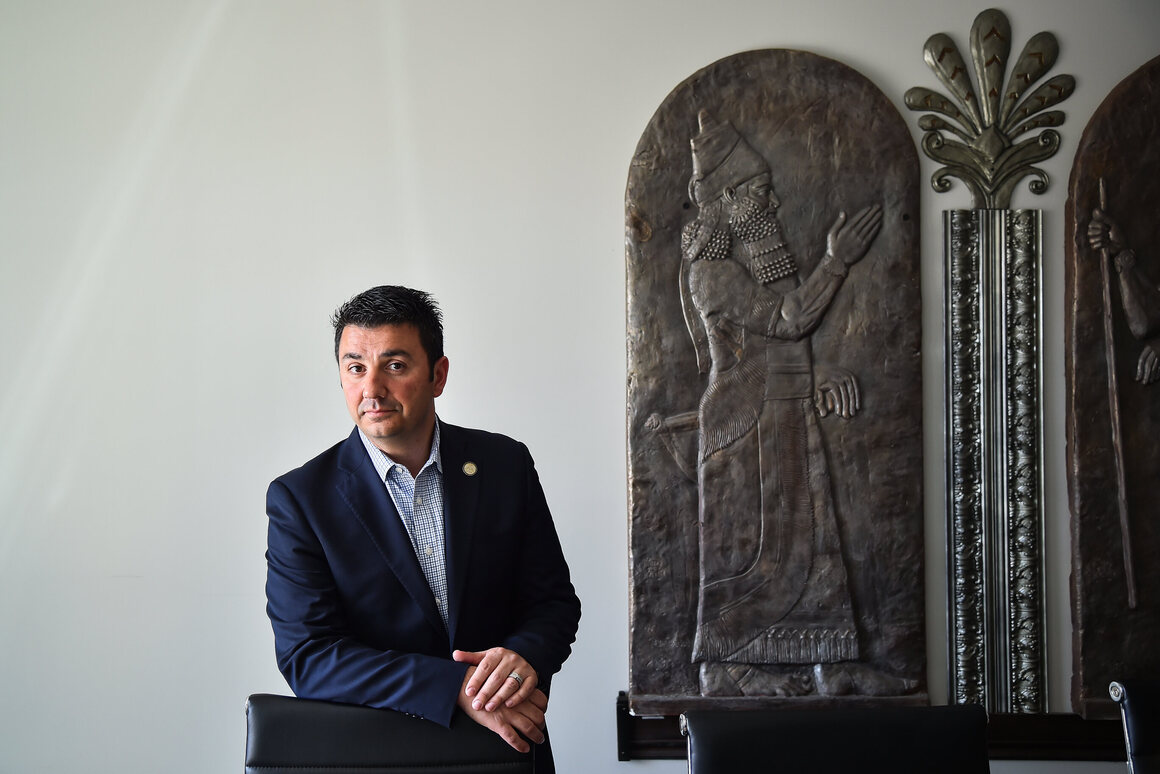 Martin Manna, President of the Chaldean Community Foundation, photographed in his office in Sterling Heights. Salwan Georges/The Washington Post via Getty Image
Last year, the Chaldean Community Foundation, the nonprofit arm of the Chaldean American Chamber of Commerce, announced the creation of “Chaldean Town 2.0” in Sterling Heights—a mixed-use development project meant to house Chaldeans and provide spaces for Chaldean businesses. Jonna says a “huge portion” of this development will be dedicated to restaurants.

Those plans will likely be delayed by the COVID-19 pandemic. The Chaldean News reports that the virus has hit the Chaldean community in ways familiar to many cities and groups, with shuttered restaurants, paused developments, and empty store shelves.

Back in 2010, in an effort to codify Chaldean cuisine for contemporary readers and home cooks, Shallal edited a community cookbook of Chaldean recipes from local home cooks called Ma Baseema. The title translates from Aramaic to “how good it is.” Many of the contributors were writing their family recipes down for the first time, she says. The cookbook is a cataloguing of the Chaldean way of life, and a way to share that with others. But Shallal adds that even more essential to these preservation efforts is the continuation of these neighborhood Chaldean restaurants—establishments whose future seems uncertain in light of COVID-19.

“Restaurants are a place of gathering,” she explains. “They play a large role in making sure we stay a close-knit community, and that the rest of the community feels like they are at home. It lets them know that the food is out there for them.”