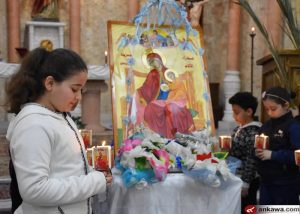 By Fionn Shiner CHRISTIANS in Syria are an example for the whole Church of how to keep hope in a time of life-changing crisis – according to a senior priest who is working with parish communities all over the country.

Speaking to Catholic charity Aid to the Church in Need (ACN), Maronite priest Father Charbel Eid Rizkallah said the courage of Syrian Christians during the civil war has been inspiring.

He said: “These Syrian Christians are, in fact, an example for the entire Church…

“Life continues in Syrian cities amid situations that we can hardly imagine.

Father Charbel is leading a procession around the dioceses of Syria of an icon, Our Lady of Sorrows, Consoler of the Syrian People, blessed by Pope Francis and commissioned by ACN as part of its ‘Console my people’ campaign.

He said: “The actions around the icon and their responses lead me to believe that they indeed receive consolation in their souls.

“They are very happy to hear the Pope’s frequent appeals to the entire Church to pray for them.”

He added: “Quite soon, I realised that the communities were looking at us with intense hope in their eyes, with a question more like ‘tell us how to live now.’”

Father Charbel said that, despite the acute difficulties in Syria, young people have engaged with the idea of Christian leadership and shown great faith.

He said: “With the help of the Jesuits in Homs and other villages around, we set up a seminar called ‘Christians and Leadership for Peace’.

“This consists of a lecture for teenagers and young adults in particular.

“To our surprise, [although] it was in the evening and it was cold, large groups of youth started to fill up the rooms.

“They asked so many practical questions about how to actually live according to the faith in their daily life that I was asked to come back.”

Father Charbel called for an end to Western government economic sanctions against the Syrian regime.

In a message to ACN friends and supporters, he said: “Use all the contacts and opportunities you have to stop the embargo, which is making everything so expensive inside Syria, and this includes finding a solution to Lebanon’s financial situation.

“Action from outside is necessary before the problem becomes bigger than Lebanon and Syria.

“Prayers, yes, are needed, but so is political action vis-à-vis those responsible for the financial and political crises that are making things even harder for the victims of the war.”

Syria is a priority country for ACN and since 2011 the charity has supported 900 projects, including medicine, rent money for housing, and repairs to homes and churches. 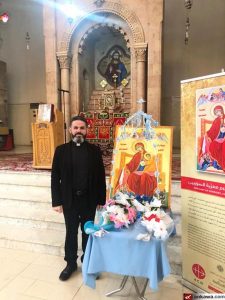 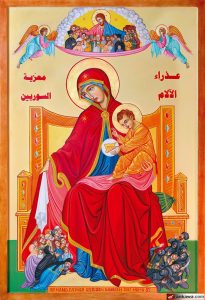