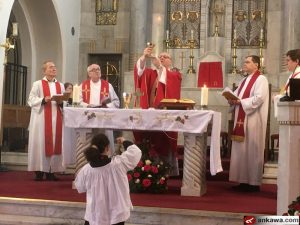 Speaking at a Mass today (Tuesday, 18th February) at the Church of Our Lady of the Rosary, Sutton, Surrey, Archbishop John Wilson spoke out against complacency in the face of persistent reports of anti-Christian persecution.

The Mass took place ahead of the Archbishop’s visit to the Sutton-based UK national offices of Aid to the Church in Need and in his homily Archbishop Wilson praised the Catholic charity for its work supporting suffering Christians.

The Archbishop said persecution of Christians “is so frequent that we are now used to it. It has become acceptable for Christians to be persecuted for their faith. It is not acceptable.”

“Freedom to believe is essential and if we do not speak up nobody else will.”

He said: “Solidarity with persecuted Christians is in our hearts. We should never be complacent about this. It is not somebody else’s business: it is our business. It has a claim on our hearts as Catholics, as Christians.”

The Archbishop went on: “I want to thank Aid to the Church in Need – and all those who support and work for it – because you put before the world, to our individual churches and governments, the importance of standing up and speaking up for the freedom to believe, to gather for worship, to be able to live and act without suffering persecution.”

And, in a church packed with parishioners and supporters of ACN, he called on everyone to take three steps to help suffering Christians:

The Archbishop added: “We, who have the freedom to practise our faith, must act in support of those who do not have such freedoms. It is not an option, it is a necessity; it is something we must do.”

Welcoming the Archbishop to the church was parish priest Father Jim McGillicuddy and present were ACN (UK) National Director Neville Kyrke-Smith, chaplain Father Dominic Robinson, members of the UK board of directors, staff and volunteers.

After refreshments in the parish hall, Archbishop Wilson was welcomed to the nearby ACN (UK) national offices where he led the Angelus before receiving a briefing about the charity and its present project priorities. 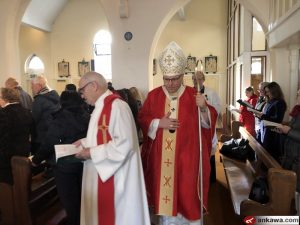 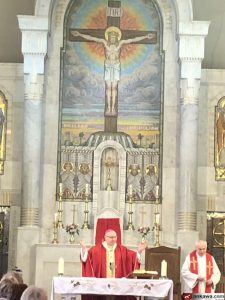