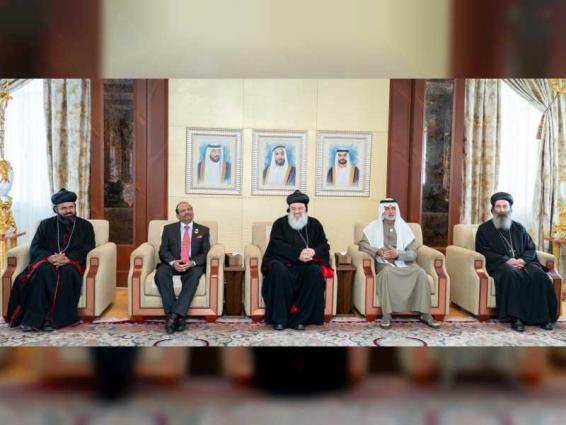 During the meeting, Sheikh Nahyan welcomed the delegation and talked with them about the relations between the UAE and the rest of the world while affirming that the UAE, under the leadership of President His Highness Sheikh Khalifa bin Zayed Al Nahyan, supports the global efforts to promote human brotherhood and global solidarity and spread the principles of peace and fraternity worldwide.

“The late Sheikh Zayed bin Sultan Al Nahyan founded the UAE on tolerance, dialogue and coexistence, which are the true wealth that we are proud of among other nations and we consider as the secret to the UAE’s success in terms of its renaissance and progress.

The country has made tolerance, acceptance and respect as ways of life and communication, along with mutual cooperation,” Sheikh Nahyan said.

Patriarch Mor Ignatius Aphrem II praised the UAE’s key role in promoting dialogue, through its pioneering model of consolidating the values of moderation and peaceful coexistence among people of different beliefs. The Patriarch thanked UAE leadership for their continued support and wished more progress and prosperity to the UAE and its people.

Also present at the meeting were Rev. Father Joseph Bali Ramban and Yusuff Ali Musliam, Chairman of Lulu Group International, and other dignitaries.