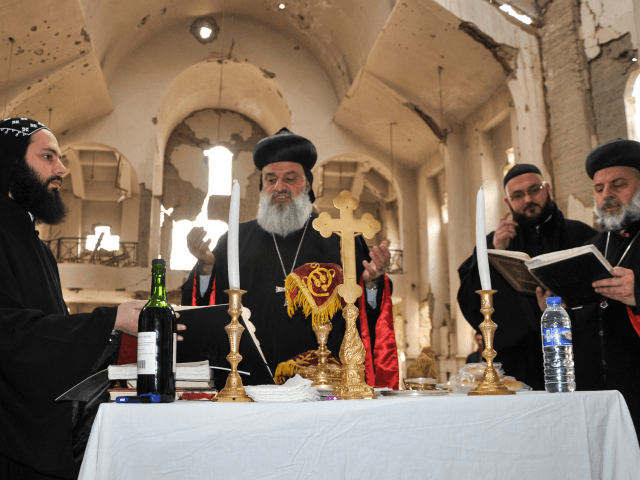 Syriac Orthodox Patriarch of Antioch, Ignatius Aphrem II, holds mass at the heavily damaged Syriac Orthodox church of St. Mary in Syria’s eastern city of Deir Ezzor on February 3, 2018. / AFP PHOTO / Ayham al-Mohammad (Photo credit should read
A former sergeant in the Swiss army has been convicted by a military court for fighting Islamic State alongside a Christian militia in Syria.

The ex-sergeant was accused of serving in the Syriac Military Council, a Christian militia, from 2013 to 2015 and is believed to have also recruited Syrians while a member of the group; he was not found guilty of recruiting fighters in Switzerland.
Breitbart TV
Louisiana Mother Arrested For Posting Footage Online Of Students Fighting

Army prosecutor Roberto Colombi argued that the actions of Cosar had undermined Swiss neutrality, though the lawyer for Cosar claimed that both Islamic State and terror group Al-Nusra were already banned by the Swiss state.

“In Switzerland, the non-assistance of a person in danger is reprehensible. When I was there and I saw the Christian population dying, I could not abandon them. Leaving would have been an act of cowardice,” Cosar explained in the court.

Cosar, who comes from Turkish-Syrian parents of Aramaic lineage, said that he first visited Syria in 2011 at the outbreak of the civil war to see what was happening to the Aramaic community on the ground.

Initially, he had spent time with humanitarian groups but as jihadists gained strength and the situation for Christians became more dire, he joined the Syriac Military Council to fight them.

The case follows a similar conviction in Sweden of another man who fought against Islamic State alongside Iraqi forces.

The 38-year-old was, however, not convicted for fighting with the group, but rather for posing in photographs and videos with the mutilated corpses of Islamic State fighters which were later posted online.

Countries across Europe have been urged to take back Islamic State fighters in recent weeks with France estimating there to be hundreds of men, women, and children who could be eligible to return.