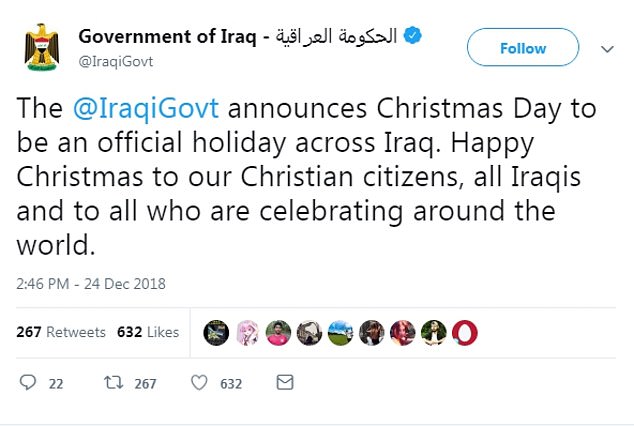 The Iraqi cabinet has approved an amendment to the national holidays law
It makes December 25 a public holiday for everyone, not just Christians as before
Iraq’s population is 95 per cent Muslim and there are around 300,000 Christians
By Miranda Aldersley
Iraq has made Christmas Day a national holiday, its government confirmed this morning.

The Iraqi Cabinet approved an amendment to its national holidays law which creates a new official one ‘on the occasion of the birth of Jesus Christ’.

Previously, Christmas Day had been designated as a religious break only for the Iraqi Christian community, but the amendment extends the holiday to everyone.
Iraq – a 95 per cent Muslim country – has made Christmas Day a nationwide holiday for all
+8

‘Happy Christmas to our Christian citizens, all Iraqis and to all who are celebrating around the world,’ the Iraqi government wrote on Twitter.
Prime Minister-designate Adel Abdul-Mahdi (centre), whose Cabinet announced today that it is extending the holiday of Christmas Day, originally just for Christians, to everyone in Iraq 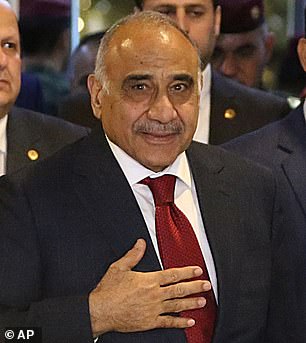 Prime Minister-designate Adel Abdul-Mahdi (centre), whose Cabinet announced today that it is extending the holiday of Christmas Day, originally just for Christians, to everyone in Iraq

‘We extend our warmest wishes to Christians in Iraq and around the world for a very happy and peaceful Christmas,’ it added.

There are thought to be only around 300,000 Christians remaining in the country, the vast majority of whom are Aramaic-speaking ethnic Assyrians.

There are also a smaller communities of Armenians, Kurds, Arabs and Iraqi Turkmens.

Before western countries’ invasion of the country in 2003, Iraqi Christians numbered around 1.4 million, but the onslaught of violence forced hundreds of thousands to flee, either to Iraqi Kurdistan or further abroad.