By Rudaw
From left: Angelo De Donatis General Vicar of Rome, Luis Francisco Ladaria Ferrer prefect of the Congregation for the Doctrine of the Faith and Louis Raphael I Sako patriarch of Babylon of the Chaldeans addend the consistory where Pope Francis creates 14 new cardinals on June 28, 2018 at St Peter’s basilica in Vatican. Photo: Andreas Solaro
ERBIL, Kurdistan Region — Patriarch Louis Raphael I Sako officially was elevated to a cardinal in the Roman Catholic Church on Thursday and sees the new position as an opportunity to work in Iraqi society and politics.

“Many, many Muslims called me for two weeks, I was receiving people for congratulations and I hope that I can do a lot for them,” Sako told the Catholic Eternal World Television Network (EWTN) prior to the Ordinary Public Consistory at St. Peter’s Basilica in Rome.

Sako was born in 1948 in Zakho, a city in northwest Iraq, which is now a part of the Kurdistan Region.

“As a patriarch, I am the head of a local church, but now with the universal church, it’s a bit different. This is giving me more courage and more space to move and to work especially in Iraqi society, but also in the politics,” he added.

In May, it was announced that Sako was to be one of 14 prelates to become new cardinals. As a cardinal, Sako will be much closer to Pope Francis and may vote on a future pope.

“It was a feast — a big celebration among Iraqis. Because for them, this is really a sign of hope, but a big support internationally,” said Sako after hearing the news.

Sako’s selection has been called “dramatic” by some Christian news agencies because historically cardinals come from large cities or areas with high concentrations of Christians or work their way through the Vatican’s bureaucracy.

The new cardinal says a visit by Pope Francis to Iraq is possible, but not likely until after Iraq’s new government is formed.

“He would like to come. He told us ‘I am ready to come and whenever they need me as a pastor I’d like to go and to support them.’ But the situation now is very complicated and now we have had elections and we do not have the formation of a new government. So we’ll have to wait. Maybe later, but not now,” added Sako.

Cardinals traditionally don red to represent the sacrifice and blood of Jesus in the Christian faith. 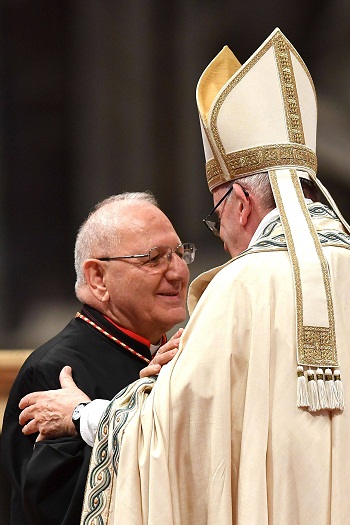 “A patriarch also has a red habit just like the cardinals. And our Chaldean church is a martyrs’ church through the whole history. Even now we are giving martyrs. And I do hope that the blood of the martyrs will be fertile, will bring us a new situation.”

Insecurity and instability has dominated Iraq over the past three decades. The last census in Iraq was in 1987, when 1.5 million Christians were counted. A Christian MP told Rudaw after the ISIS conflict only about 100,000 Christians remain.

“Our problem and our challenge of the Church is how to keep them there in the spot they live. We have to find for them schools, dispensaries, infrastructure, but also some jobs. And if we get this money we can do a lot for them,” Sako told EWTN in a previous interview at a conference for church funding.