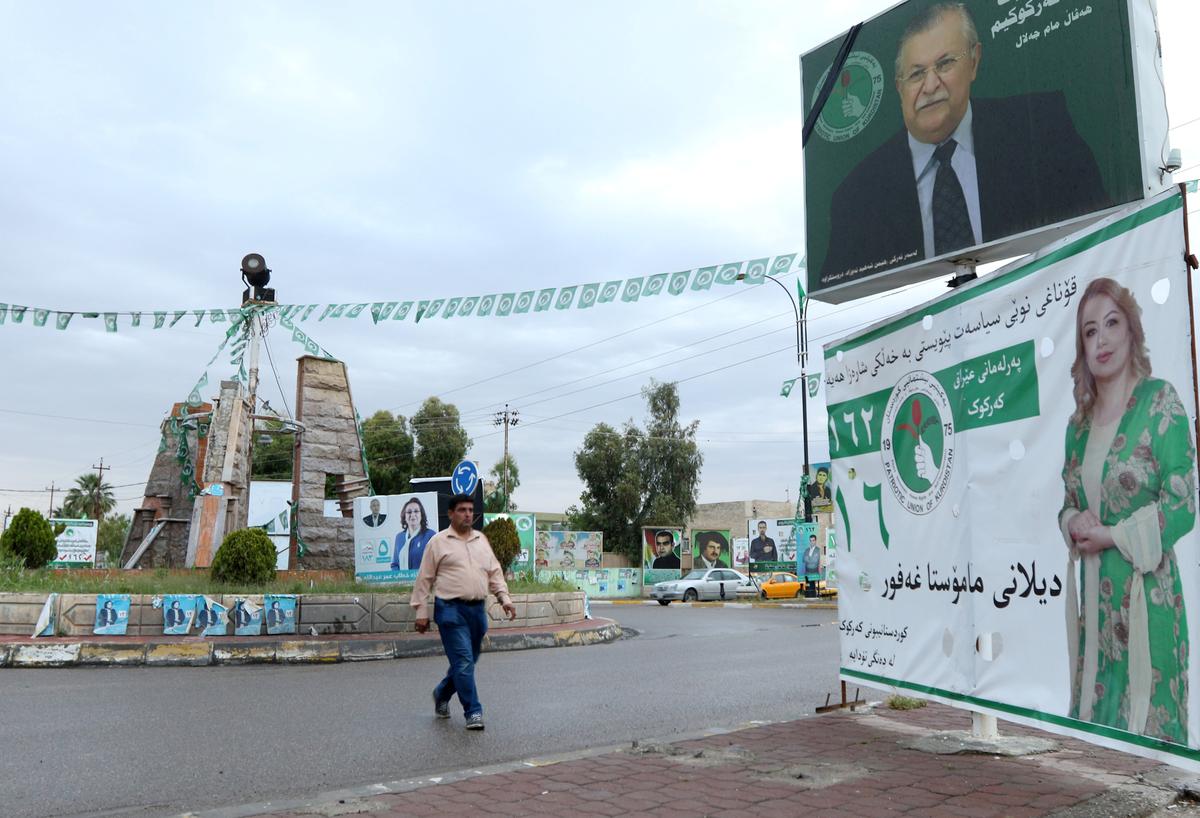 John Davison
KIRKUK, Iraq (Reuters) – An intersection in the northern Iraqi city of Kirkuk paints a vivid picture of the Kurds’ rapid turn of fortune. The towering statue of a fighter who used to brandish a Kurdish sunburst flag now holds the red, white and black of Iraq’s Baghdad government.
A man walks past a campaign poster ahead of the parliamentary election in Kirkuk, Iraq May 11, 2018. REUTERS/Ako Rasheed

Opposite, a fortified former headquarters of the Kurdish autonomous region’s ruling party serves as a base for the Iraqi forces that led Kirkuk’s swift recapture in October and dashed hopes of Kurdish independence.

Many Iraqi Kurds long for Kirkuk as the eventual capital of their own state, and as Islamic State went down to defeat in northern Iraq last year the oil-rich city seemed closer than ever to becoming a permanent center of Kurdish power.

That short-lived ascendancy has been reversed, and hopes for a Kurdish Kirkuk have faded ahead of an Iraqi national election on Saturday expected to weaken the main Kurdish parties there.

“We had many dreams for Kurdistan but these have gone – we’ve lost it all,” said Mariwan Ali, a 28-year-old former fighter in the Kurdish peshmerga militia who now works as a cook in Kirkuk.

He said he would boycott the vote. “I refuse to vote in any Iraqi election, for anyone who’s part of the state of Iraq.”

Ali and his comrades helped drive Islamic State out of Kirkuk after Iraqi government forces fled a lightning advance by the jihadist militants in 2014.

With that, the Kurds, who were persecuted for decades under Iraqi dictator Saddam Hussein, controlled Kirkuk for the first time, and the Erbil-based Kurdistan Regional Government (KRG) duly erected the statue of the Kurdish fighter.

The peshmerga, Iraqi military and Shi’ite Muslim militias joined forces to defeat Islamic State in 2017. But with their common enemy gone, the rivalry between the KRG and Baghdad was laid bare, especially in Kirkuk.

A decision to include Kirkuk in a controversial Kurdish referendum in September that voted overwhelmingly for independence sealed its fate. Within weeks, Iraqi government forces had advanced on the city, and captured it in a matter of days.

Now, only the Iraqi flag is permitted to fly.

The city’s takeover was a devastating blow, taking much of the KRG-run autonomous region’s oil revenue, and a symbolic loss that local Kurds say has left them humiliated and considering leaving again.

“I couldn’t bear to see another Kurdish flag ripped up in front of me – I’d rather die,” 67-year-old Ali Majid, another former fighter who volunteered post-retirement to fight against Islamic State, said at his restaurant.

“It’s humiliating to be a Kurd now in Kirkuk. You get harassed at checkpoints, and I had a Kurdish flag sticker taken off my car,” he said. “I also got rid of the gun I kept at home, after repeated searches by Shi’ite militias” who had helped recapture Kirkuk in October.

Majid was one of few Kurds wearing the traditional sash across his waist.

Other expressions of Kurdish nationalism have disappeared. At a school used as a polling station for the September referendum, where Kurds danced at the time, Iraqi federal police filed in on Thursday to cast their early ballots.
MUTED NATIONALISM

Majid said that if the election result weakened the Kurds, he would leave Kirkuk.
ANNONS

Saturday’s election – Iraq’s first since Islamic State was driven out – will shape attempts to heal the country’s deep divisions and could shift the regional balance of power.

The three main ethnic and religious groups, the majority Shi’ite Arabs and the minority Sunni Arabs and Kurds, have been at loggerheads for decades.

In Kirkuk, home to many of Iraq’s minorities including Kurds, Turkmen, Sunni Arabs and Assyrian Christians, the distribution of seats across ethnicity and religion is not expected to change.

Kurds, who are scattered across Iraq, Iran, Turkey and Syria, suffered a particularly brutal fate under Saddam, who gassed them, buried them in mass graves and gave their land to Arabs.

With many Kurds disillusioned about the political elites who led the failed independence bid, the election could undermine the grip on power that two ruling parties have enjoyed since Iraq’s Kurdish region gained semi-autonomous status in 1991.

Kurdish campaigning in Kirkuk has been muted. Supporters of Turkmen and Sunni Arab candidates paraded through the city center on Thursday, tooting car horns and waving flags, but no such fanfare was seen in the quieter Kurdish neighborhoods.

Many from Kirkuk’s other minorities say they are happy to be back under the Baghdad government.

“Things are better now, there’s more order. We prefer the Iraqi state to be in control here, since it’s a legal government and not just a non-state actor,” Turkmen oil worker Bashar Aref, 45, said at a shopping center.

“Before October it was tense.”

A return of Kurdish control looks less likely than ever. Local Kurdish media reports that Kurdish security forces might have a future role in the policing of the area have been rejected by Iraqi military officials.

“We have no orders to the effect that the peshmerga will return to Kirkuk,” General Maan Saadi of the elite Counter Terrorism Service said from his office in the former Kurdistan Democratic Party headquarters.

“The city is under control, and more stable than it was under the peshmerga.”