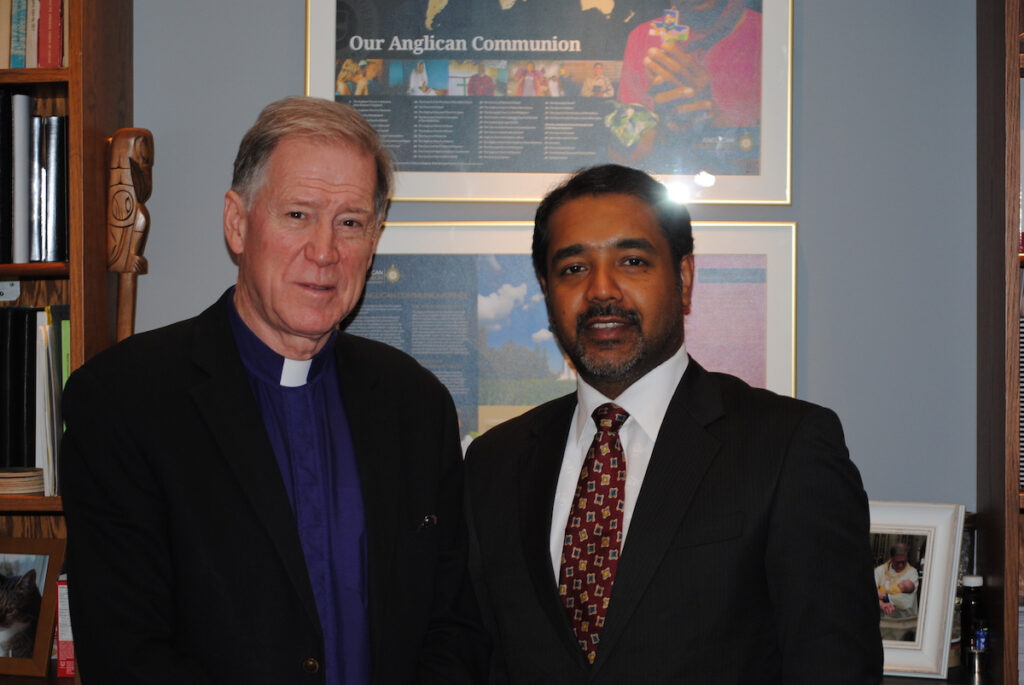 By Joelle Kidd –
Archbishop Fred Hiltz, primate of the Anglican Church of Canada, with scholarship recipient Anish Joy during a visit to the church’s national office Feb. 20, 2018. Photo: Joelle Kidd
Scholarship of St. Basil the Great recipient Anish Joy, who is a member of the Syriac Orthodox Church in India, says the scholarship has given him “the opportunity to learn something new” about Anglicanism that he will take back to his own church.

Among the things he’s learned from participating in Anglican services is “how open and how warm, welcoming, the Anglican church is towards other ethnic groups, other communities,” says Joy. “The kind of interactions that I’m making when I’m here—meeting people, talking with them about their life and how the Anglican church or Anglican spirituality was supportive for them in their life…it’s much bigger than reading a book. You experience it, talking to them, being with them, having food with them.”

The Scholarship of St. Basil the Great is administered by the Anglican Foundation of Canada. Established by the late Henry Gordon Hill, former bishop of Ontario, in 1991, it was created to encourage a student exchange between members of the Anglican Church of Canada and members of the Oriental Orthodox churches and the Assyrian Church of the East. Hill hoped to increase friendships and ecumenism between the churches through the scholarship. Through the scholarship, seminarians, clerics and members of religious orders can receive grants to study abroad.

“It’s a big honour to be part of this scholarship, because I was selected from a big Oriental Orthodox community,” says Joy, who has stayed in the residences of Saint Paul’s University in Ottawa for the past two months, and hopes, pending a visa renewal, to stay until mid-April.

Joy is currently a research fellow at the Pontificia Universita Antonianum in Rome, Italy, where he is completing a PhD in gender studies. He plans to return to India, where he teaches as an associate professor at Malankara Syrian Orthodox Theological Seminary in Kerala, and is educational director of Poornodaya Vidyanikethan, a school based on holistic learning.

Joy says he hopes that he can continue to strengthen the relationship between Anglicans and members of the Orthodox church by creating some kind of exchange program—“cultural exchange trips, or maybe student exchange programs or seminarian exchange.”

“I don’t want this four-month exchange to end at four months. As a recipient of this hospitality, this fellowship, I would love to continue it by welcoming people from [the] Anglican church back to India,” he says.

Exchange trips help to create open dialogue, Joy says. “If there is frequent communication, frequent visits, then we start thinking, ‘Why can’t we have a dialogue?’ ” Dialogues between Anglicans and Orthodox Christians, he says, can yield “fruitful relationships.”