by Alexander Slavsky • ChurchMilitant.com •
Comes amidst sadness at the separation of families and damage to homes and churches
You are not signed in as a Premium user; we rely on Premium users to support our news reporting. Sign in or Sign up today! 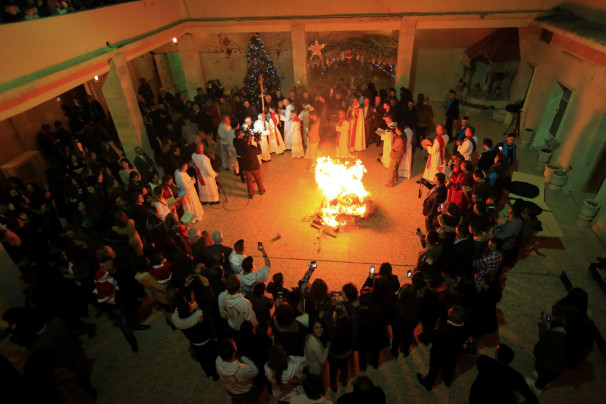 TELESKOF, Iraq (ChurchMilitant.com) – In the midst of intense persecution of Middle-Eastern Christians, a reprieve was granted to Christians in Iraq after they forced ISIS out of their country.

On Sunday, Iraqi Christians celebrated Christmas at the rededicated Church of St. George in Teleskof for the first time in three years since the Islamic State took control, threatening the Christians with forced conversion, the payment of a tax or death. As many as 12,000 Chaldean Christians fled and moved to nearby towns and cities, while others moved abroad.

“Hundreds of congregants, dressed in their finest, poured in to pray and receive communion from Father Salar Bodagh, who later lit the traditional bonfire in the church’s courtyard, a symbol of renewal, he said,” according to the New York Post.

In addition, Syrian Catholics attended midnight Mass at the Church of the Immaculate in Qaraqosh on Sunday, which was severely affected by a fire that left the walls discolored and blackened, along with ISIS graffiti. The pastor of the church, Fr. Butros Kappa, spoke of hope in the midst of sadness on Saturday before Christmas Mass “to remind everyone that despite the tragedies that have befallen us, we’re still here.”
“We’ll have a Christmas Mass like in previous years, but this year, ours will be a joy soaked in tears, because all of our people have left Iraq,” according to Kappa.
The school headmistress with tears in her eyes mentioned that it’s “so special to be back in my church, the church where I got married, the church I raised my children in.”

The damage to Christian strongholds included looted and burned homes and churches, deprived of artifacts and relics. Qaraqosh, a town 10 miles west of Mosul, had more than 50,000 Christians before the invasion of the Islamic State. A few hundred families resettled in the town with complete congregations abroad, for example, the Syriac Orthodox Christian community of the Church of Mart Shmony.

Teleskof has had more than 7,000 people displaced across Iraq and its independent Kurdistan region, the United States, Australia, Germany, Lebanon and Jordan, which has residents upset that they are celebrating Christmas without family members. Umm Rita commented on the sentiment this Christmas season: “We usually celebrate with our entire family. But how can we be happy this year? Our brothers and sisters, even my own daughter, her husband and child I’ve never met, have all moved away.”
Iraq announced the defeat of ISIS over two weeks ago after a three-year struggle involving foreign armies and local forces against the terrorists, forcing them out of towns and villages. The U.S. coalition reported on December 5 that there were less than 3,000 fighters left in Iraq before the country declared “final victory” on December 9. That number has since gone down to about 1,000.
“We can tell you that we are working with our partners to kill or capture all remaining ISIS terrorists, to destroy their network and prevent their resurgence, and also to prevent them from escaping to bordering countries,” the coalition said in a statement Wednesday.
Iraq’s declaration of victory over ISIS came two days after the Russian military announced the defeat of ISIS in Syria, which left close to 3.2 million people displaced from their homelands. Prime Minister Haider al-Abadi said Iraq is in a new phase, “the post-victory over Daesh [ISIS] phase,” and must take steps to thwart another future attack.
“Daesh’s dream is over and we must erase all its effect and not allow terrorism to return. Despite announcing final victory, we must remain vigilant and prepared against any terrorist attempt on our country, for terrorism is an eternal enemy,” said Abadi.
“Our community has been gutted,” noted Firas Abdelwahid, a past state oil employee, who commented on the thousands who fled abroad because of religious persecution. “But what do we expect? The past is tragic, the present is desperate and well, there is no future for us Christians in Iraq.”
Celebrating Christmas here is a message, that despite all the threats, persecution, killing and what we faced in Iraq, we have hope that this country will change.Tweet
In 10 years, the Christian populations in Iraq and Syria have decreased — from 1.4 million Christians in Iraq before the U.S. invasion of Iraq in 2003 to 250,000 today and from one million Christians in Syria to between 500,000 and one million today. Most Iraqi and Syrian Christians are living abroad as refugees, with many Syrian Christians living in Jordan, Lebanon and Turkey.
However, the genocide of Christians in the Middle East is the concern of the European Union (E.U.) and the United Nations (U.N.) responsible for providing humanitarian aid and setting up resettlement programs. Ronald Rychlak, editor of “The Persecution and Genocide of Christians in the Middle East” and professor at the University of Mississippi School of Law, argues that Middle Eastern Christians’ dependence on the E.U. and the U.N. is not going to stop the persecution of Christians:

The greatest hope, I suppose, is that we drive ISIS out of control, the caliphate collapses, and we see a return to a Western mindset, let’s say, where people of different faiths are welcome to thrive alongside one another, which is how so many of these nations were a decade or two ago. If we get back to that, I think everybody would be happy. But as it is now, it’s a very difficult and sad case.

At least 100 Christians, along with Muslims, also attended Christmas Mass on Sunday at St. Paul’s Church in Mosul, a northern Iraq city. The Mass was held at the only operating church in the city, which was reclaimed in July from ISIS after more than three years of captivity.

“Celebrating Christmas here is a message, that despite all the threats, persecution, killing and what we faced in Iraq, we have hope that this country will change,” said Rev. Martin Banni, a Chaldean Catholic priest in Karamlesh, according to JPost. “The last Christmas Mass here was in 2013. Now, the cross is lifted again over the Church of St. Paul.”
https://www.churchmilitant.com/news/article/first-christmas-for-iraqi-christians-after-isis-defeat