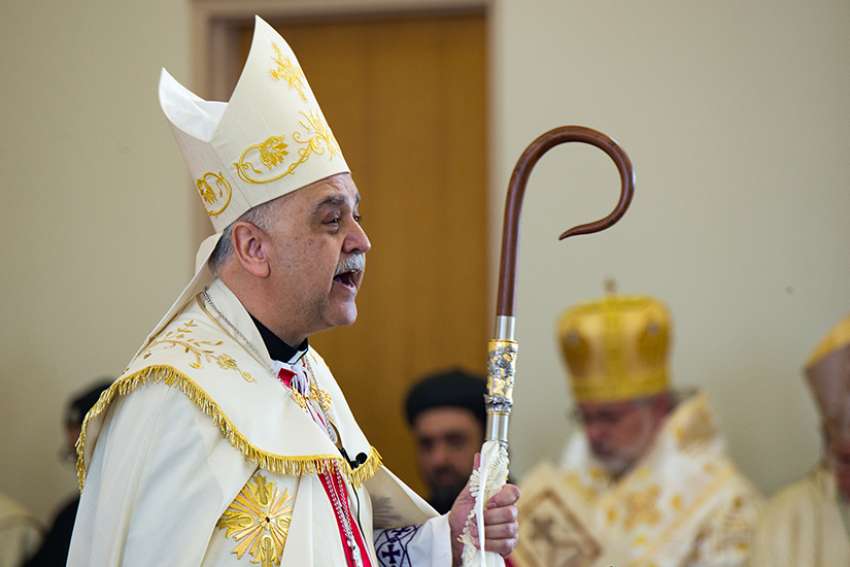 He was subsequently elected a bishop in the Assyrian Church of the East and oversaw the Assyrian community in the Western United States from San José, Calif.

He became an advocate for ecumenism from within the Assyrian Church of the East. Then, after studies at the Catholic University of America in Washington and the Angelicum in Rome, the Synod of Chaldean Bishops received him as one of their own in 2013. He has served the Chaldean community from San Diego, Calif., since 2014.

The Chaldean Eparchy of Mar Addai of Toronto, established in 2011, serves an estimated 40,000 Chaldean Catholics in Canada.

Shamail Ablakan not only admires Soro’s path, he hopes to follow him. In 1983, Soro sponsored Ablakan as an Assyrian-Iraqi refugee from Greece. By 1986 Ablakan was serving at St. Mary’s as Soro’s deacon. As Soro was being enthroned at the Chaldean cathedral just a short drive from St. Mary’s, Ablakan was there hoping to serve in Soro’s church once again.

It’s been a couple of years since Ablakan has functioned as a deacon as he has come to see the division between Assyrians in the two churches as artificial.

“Otherwise, we are one nation,” Ablakan told The Catholic Register before Soro took possession of his cathedral.

Ablakan’s own reading in Christology has led him to see Assyrians as most at home in the Catholic, Chaldean church.

“We have to be in real faith, true faith,” he said.

In his first address to his new flock, Soro gave thanks to the Assyrian Church of the East for experiences that shaped him as a bishop. He also proclaimed his loyalty to Pope Francis and his vision.

“Our Church will be a Church for the poor, for the marginalized and for the persecuted,” Soro said.

Closer collaboration with the Canadian Conference of Catholic Bishops and an emphasis on ecumenism were priorities Soro laid out in a brief address.

For hundreds of ordinary Chaldeans who filled the cathedral on a Wednesday morning, seeing their third bishop in the history of Chaldeans in Canada take up leadership was too important to miss.

“I wanted to be part of it. It’s our Chaldean community,” said Wesen Resko. “I grew up in this community. I look forward to getting to know him better, and to introduce my children to him.”