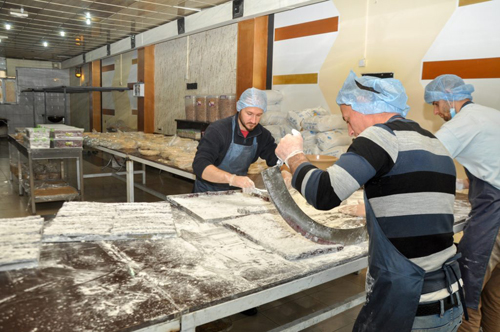 World Watch Monitor
Erbil sweet factory
Some of the workers at Erbil’s new sweet factory. PICTURE: World Watch Monitor, 2017
In his new factory, surrounded by sesame seeds, pistachios and sugar, Rabeea dips his spatula into a large vat of honey-coloured syrup. He’s checking its consistency to see if it’s ready for the next step in the production of traditional Iraqi sweets, like sorjuq or halqoum.

“We deliver our products to shops all over the country,” he says. “But most of the sweets go to Suleymaniyah, Zakho and Shaklawa [towns across north-eastern Iraq]. We even have requests from abroad, but for now, with the current situation in our country, that is impossible.”

Rabeea, 38, opened the factory in March to provide a living to families like his own, who sought refuge in Erbil in August 2014 when Islamic State forced many Christians to flee their towns in the Nineveh plains.
Although the Church in Erbil welcomed them as guests, they wanted to earn their own income and be less reliant on aid provided to internally displaced people.

Rabeea is a good choice to manage the factory – he ran a similar one in his home city of Qaraqosh, and his face still lights up when he talks about it, although he describes life in Iraq now as “very difficult”.

Christian charity Open Doors helped Rabeea set up his business, which is now flourishing, with plans to add to the current workforce of four other displaced Christians.

The factory is on the first floor of a rented building on the main street in Erbil’s Christian neighbourhood of Ankawa.

“We produce all kinds of sweets that are common in our country, but for now we have a limited variety because we don’t have the machines. We could do more, but this is a good start,” Rabeea says.

Close to the big windows that fill one whole side of the room, three men wearing blue hygiene caps over their hair, work at a stainless steel table covered in flour. One takes out a slab of halqoum from a large metal baking sheet, puts it on the floured work surface and cuts it into quarters. He pushes each piece to the next man, who, using a long, curved knife, cuts the quarters into strips a few centimeters wide. The final man in the chain rolls the strips in flour and cuts them into cubes. The sweets are then ready to be packed in small plastic boxes.

The room also stores their raw ingredients: sacks of sugar piled high, buckets of walnuts and sesame seeds. There are enough ingredients to produce many sweets.

The finished products sit on a large table in the middle of the factory floor – hundreds of sesame and honey cookies. Another table is full of boxed sweets made with coconut, pistachios or almonds.

The worker who cut the halqoum into quarters says: “I am from Qaraqosh. I have been displaced since 6 August 2014 because of Islamic State. When I came here with my family, we had nothing. I am so happy with this work. I am thankful to the organisation that employed us.”

Like his colleagues in the factory, he is now able to provide an income for his family and to start saving money to one day restore their damaged house in Qaraqosh.

Rabeea hopes to return too; the machinery and tables in the factory could easily be moved to another location.

“One day we might be back in our places again; we can continue there,” he says.