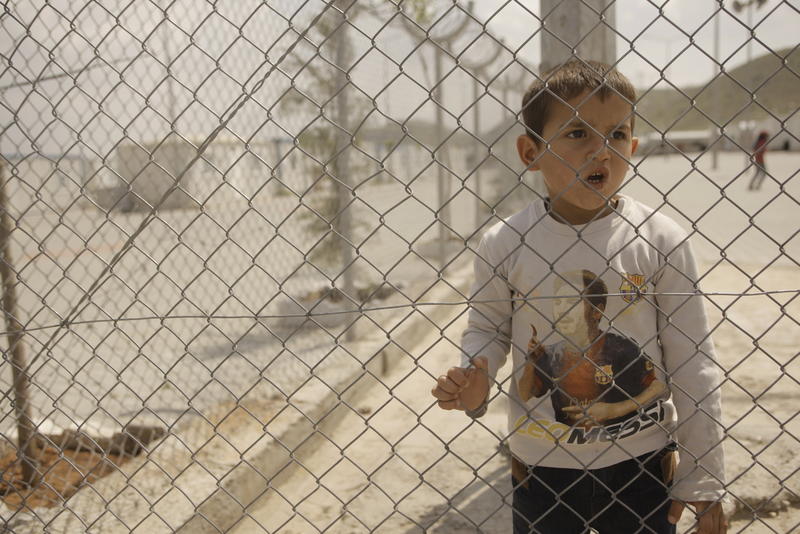 By Kate Wells
A boy in a refugee camp in Turkey. A family of Iraqi Christians are currently waiting in Turkey. They were supposed to be resettling in Michigan in the next few days.
An Iraqi man planned to come join his wife and child in Michigan later this year. They’d been issued special visas because of his wife’s work as an interpreter for the U.S. military in Iraq. But when word started getting out last week about a looming crackdown on immigration, he changed his plans. By Wednesday, he was doing everything he could to get out of Iraq immediately.

“It took time to travel and to get the ticket,” says Anya Abramzon, executive director of Jewish Family Services of Washtenaw County, the resettlement agency working with the man’s family. “So when he got here [to the U.S.], that happened right after the ban was signed.”

The man was detained overnight on Saturday, Abramzon says, in the Philadelphia airport. Behind the scenes, she says there was a “massive effort” was underway by the ACLU, JFS, and the Philadelphia mayor’s office to get him released.

Sunday morning, he was on the 10:30 a.m. flight to Michigan. Now he’s home with his family.

But others aren’t as fortunate. A family of six Iraqi Christians were scheduled to arrive in Washtenaw County in the next few days. Now they’re stuck in Turkey, Abramzon says, waiting to see what happens next.

At least 16 more refugees from Syria and Iraq were scheduled to be resettled in Metro Detroit in the next week or so, says Sean de Four, VP of Children and Families at Samaritas. That includes the wife of a Syrian man who’s already resettled in Michigan.

Meanwhile, refugees and immigrants who are already in this state, are asking what this means – both for their family overseas, and for their own safety here in the U.S.

Abramzon and her team are trying to organize a community-wide meeting to address those concerns. They’re holding off until the end of February, when hopefully the situation will be a little bit clearer, says Shrina Eadeh, Director of the Resettlement Program at JFS.

“We’re not going to do it right away because things are still trying to be worked out, and we’re trying to provide information for our community about what resettlement will look like,” Eadeh says. That meeting will be open to the wider community too, she says, not just refugees. “People will receive some direction.”

On Monday, they’ll also start talking with refugees at daily English classes. “They’re 100% all worried, I can bet, about family that they still have overseas,” Eadeh says. “And those families that have applied for refugee status and whether they can come or not.”

She’ll be honest with them, she says, that not all the answers are clear yet.

“So, I’m going to tell people, that I’m going to work every day to make sure that we advocate for them and we ensure that people are safe,” says Eadeh.