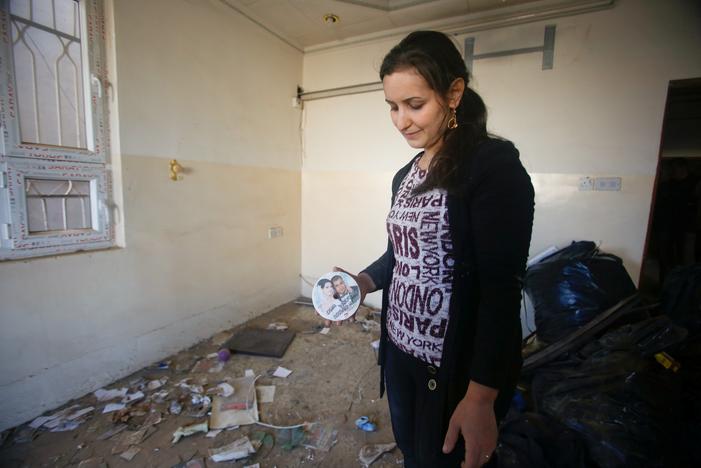 A Christian woman inspects a home in the town of Bartella east of Mosul, Iraq, after it was liberated from Islamic State militants November 23, 2016. REUTERS/Khalid al Mousily
By Ulf Laessing | BARTELLA, Iraq
A damaged picture of Jesus and a CD from his daughter’s wedding were pretty much all Iraqi Christian Said Shaba found when he returned to the ransacked house he had to flee when Islamic State arrived two and a half years ago.

The militants stole a safe with his savings and set the two-storey house ablaze before Iraqi forces pushed them out a month ago from the northern town of Bartella as part of a campaign to retake nearby Mosul, the group’s last stronghold in Iraq.

Black army Humvees patrol the potholed streets where Islamic State fighters set homes on fire, while rows of shops and restaurants have been flattened during fighting.

But tired of living with his seven-member family in a rented house in nearby Erbil, Shaba and other Christians came to check on their houses for the first time since fleeing Bartella in 2014 when Islamic State seized Mosul and much of Iraq’s north.

“They destroyed and stole everything. They even took away our safe,” the 59-year-old said, pointing to a wardrobe in his bedroom where a safe containing $1,400 in local currency and dollars once stood.

When rumors of an Islamic State offensive in August 2014 spread, Shaba drove his family to the safety of Erbil one morning, planning to return to take cash and documents. But he never made it back as the jihadists were already in control of Bartella by the afternoon.

His petrol storage facility, the family’s main source of income, a few blocks from his modest house, was destroyed during fighting, he said.

Luckily, among the debris on the house’s floor a picture of Jesus survived though militants tore out parts of the face. His wife Nidhal kissed the painting and put it on a wall in the ransacked reception room.

A CD containing pictures of their daughter’s wedding also made it through the occupation.

“They have left nothing intact including windows, doors and walls,” said Milano Yousuf, the daughter. “This CD is more important to me than all the furniture. It is irreplaceable.”

Returning for good to Bartella and other nearby towns is not option for now for thousands of civilians — Christians and Muslims alike — as the battle for Mosul drags on.

The army has closed Bartella and other towns and villages, using them as forward base. Special forces commanders and U.S. officers, who have been backing the army campaign, met in the town on Wednesday.

The Iraqis and the Americans arriving in Humvees declined to discuss the meeting, which took place amid heightened security. Dozens of army vehicles with mounted guns were parked on an unpaved square in the town.
Also In World News

The army only lets in civilians selectively to inspect their houses and take some belongings, officers say. Still, many hope they can stay.

Hundreds were queuing at a checkpoint, where officers sent many back for lack of paperwork. Shaba, the Christian entrepreneur, said he got his army permit to go home only through “wasta”, or personal connections.

“We need to make sure the places are safe, that Daesh left no bombs,” said an Iraqi officer, using a derogatory Arabic term for Islamic State.

Apart from Christians, there were also many Shi’ites, seen by Islamic State as heretics, trying to head home.

“We are trying to see our house for the first time since we fled in August 2014,” said 28-year-old Ahmed Ali, a Shi’ite who escaped with his 17-member family from their Bartella home when the militants approached. His cousin was killed by the Sunni fighters, he said.

“Life has become very difficult, paying rents in Erbil with very little work,” he said, standing with a veiled relative near the checkpoint where soldiers told civilians without permits go back. “We don’t know whether our house still stands but we hope to go back soon, God willing.”