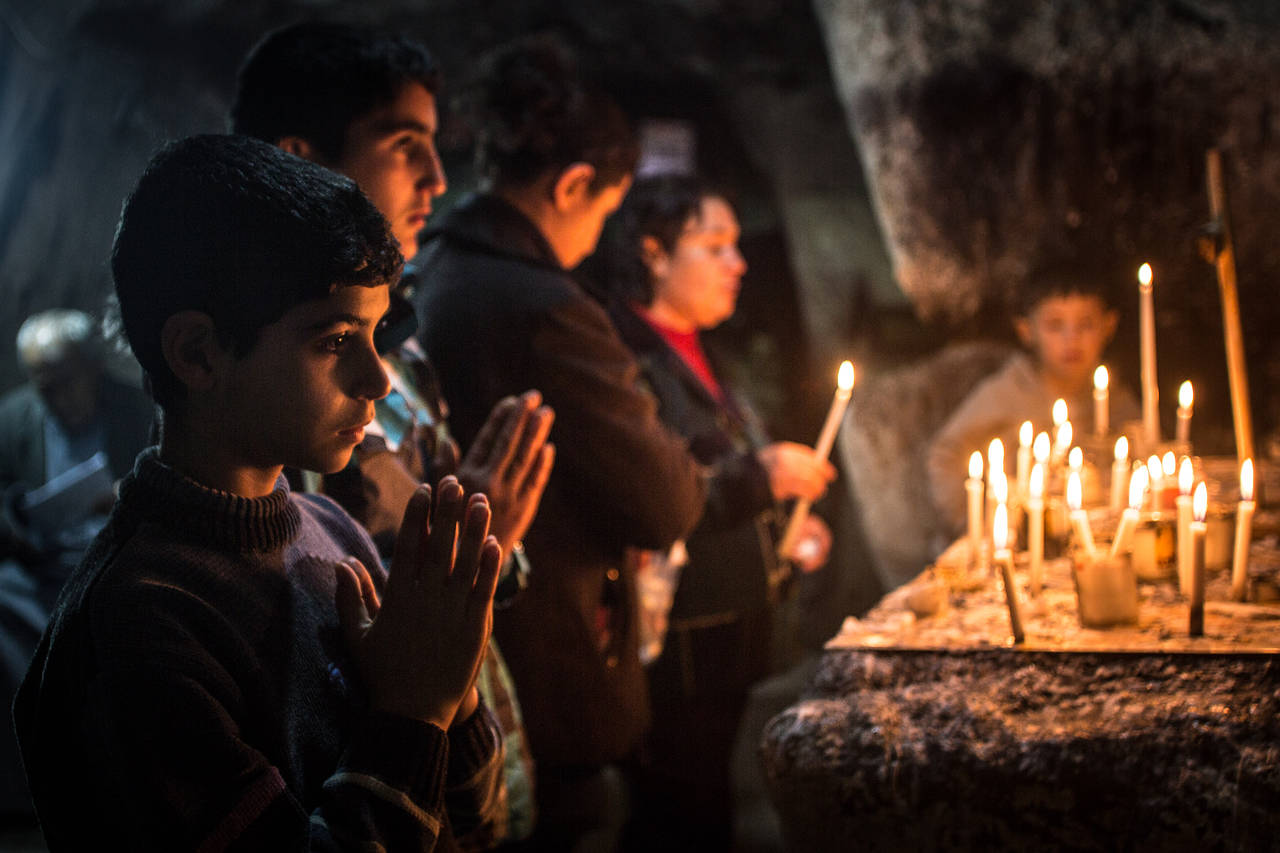 As ISIS loses ground near Mosul, Turkey stands in the way of the exiles’ return.
Iraqi Christians light candles inside a shrine in Mazar Mar Eillia Catholic Church, Erbil, Iraq, Dec.12, 2014. Photo: Getty Images
By Mindy Belz
Noura Diyha wrestled a phone from her pocket to show me a photo of herself at age 3. She’s wearing a bonnet and riding a tricycle on a grass lawn. Some 14 years later, Noura is one of nearly 1 million internally displaced people in Iraqi Kurdistan. Her family fled from the mostly Christian village of Batnaya in August 2014, when Islamic State militants captured territory throughout northern Iraq. She now lives in Erbil, the capital of Iraqi Kurdistan.

As coalition forces—Iraqi government forces, allied militias and Kurdish soldiers, backed by U.S. air and on-the-ground support—advance toward Mosul and retake villages like Batnaya, Noura’s family hopes to return home soon. Yet even success on the battlefield won’t guarantee a safe return for exiled Christians and other religious minorities.

ISIS fighters dug in at Noura’s town and came under heavy fire on Oct. 20. They used rocket launchers and suicide bombers against coalition ground troops, but the village was retaken earlier this week. Coalition forces, aided by U.S. airstrikes and mortar rounds, covered significant ground and retook dozens of other villages controlled by ISIS. Nearing Mosul’s city limits, the armies face intense resistance.

For Noura and thousands of others, these are days of waiting, only now with the possibility of returning home. “A military defeat of Daesh [ISIS] is only the first step,” says Father Emanuel Youkhana, an Assyrian priest who heads an Iraqi relief organization. “We must deal with root causes that allowed Daesh to arise and take this territory, in order to permit all Iraqi people to return home.”

Turkey, a NATO member, now stands in the way of the Christians’ return. President Recep Tayyip Erdogan inserted thousands of Turkish forces into Nineveh months ago, and he insists they participate in the fight against ISIS. Mr. Erdogan told an Arab news channel this month, “only Sunni Arabs, Turkomens, and Sunni Kurds” should remain in the Mosul region once it is liberated. Under martial law in his own country, Mr. Erdogan has closed churches and detained Christian clergy.

Father Youkhana and others fear Turkey seeks to re-establish its own empire out of the crumbling ISIS caliphate, one similar to the Ottoman empire—the same government that killed an estimated 1.5 million Armenian and Assyrian Christians in genocides a century ago.

Yet the Obama administration is pressuring Baghdad to accept a role for Turkey. Given the strength of Turkish influence, and Christians’ lack of political clout, this is likely to finish the Christians’ right to return. This despite the fact that Christians have lived in this part of the world since the first century. I’ve walked through church ruins in Nineveh that archaeologists estimate were constructed in the second or third century.

“I believe we stand at a crossroads for the future of Christianity—and pluralism—in the Middle East,” said Carl Anderson of the Knights of Columbus at an event this month in New York City. “Either Christianity will survive and offer a witness of forgiveness, charity and mercy, or it will disappear, impoverishing the region religiously, ethnically and culturally.”

Mr. Anderson’s organization compiled a 300-page report at the request of the State Department documenting ISIS genocide of Christians in Iraq. Besides the toxic level of displacement, the report contains graphic detail confirming that at least 1,100 Christians have been murdered by Islamic militants in Iraq since 2003, though the number is almost certainly higher now. Yet U.S. officials seem to be ignoring these findings, even though the report pushed Washington to legally declare ISIS’s actions a “genocide.”

Exile is at the heart of the Christian message. The Old Testament Jews wandered in the wilderness and the savior Jesus Christ “had no place to lay his head.” His apostle Paul wrote four of his New Testament epistles from prison. The Christians in Iraq know this is their story, too. Yet being vanquished forever from this heartland is a terrible fate to contemplate.

Noura’s family is hopeful, but they’ve already lost everything—material possessions and friends and family—to ISIS. The tricycle photo is all that remains of Noura’s other life, and she had to download it from Facebook. She told me that “the hardest thing to lose is my memories.” But her future may be threatened too.

Mrs. Belz, a senior editor at World Magazine, is the author of “They Say We Are Infidels: On the Run From ISIS With Persecuted Christians in the Middle East” (Tyndale, 2016).