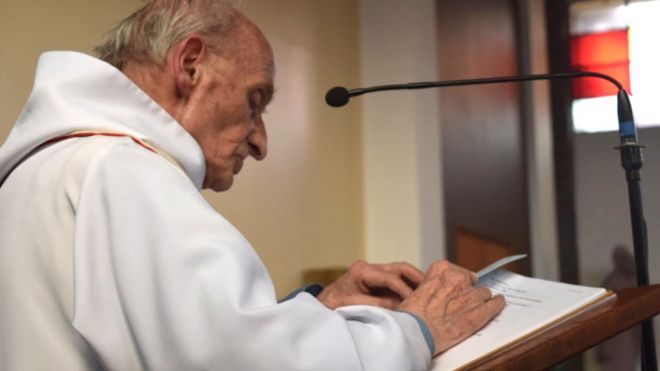 An elderly man left for dead by two jihadists at a church in the French city of Rouen has spoken of the terrifying ordeal for the first time. Guy Coponet was forced by the killers to film the murder of 85-year-old Fr Jacques Hamel inside the church at Saint-Etienne-du-Rouvray.

“I had to film my friend Father Jacques’s murder! I can’t get over it,” said the 87-year-old parishioner.

Mr Coponet was himself stabbed several times, including once in the throat.

He had to wait 45 minutes for help and told the Famille Chretienne (Christian Family) website he had been very lucky to survive.

“The emergency medic who treated me told me ‘you had divine protection because the knife attacks missed your vital organs. But it really wasn’t far away – it’s like a miracle’.”

He, his wife Janine, and three nuns had been attending Fr Hamel’s service when the two Islamist militants burst into the church.

Who were the attackers?

Adel Kermiche and Abdel-Malik Petitjean, both 19, were known to French security services. Their attack was claimed by so-called Islamic State (IS).

Kermiche was awaiting trial on terror charges and had to wear an electronic tag, although not during the morning.

Petitjean was on the French security services’ S-list for suspects considered a security threat. He had travelled from the south-east Savoie region to carry out the attack.

Both were shot dead by police.

Mr Coponet described how he had been forced to hold a camera for the killers, who checked on the quality of the images they planned to post on social media.

He told French TV on Thursday that Fr Hamel had tried to fend his attackers off right to the end, crying out “Satan, get out of here, get out, Satan”.

However, he was convinced that even at that moment the priest was not condemning the young jihadist killing him. “They were in the grip of evil, it’s a bit like a sect,” he said.

Earlier this month Pope Francis said Fr Hamel was a martyr and already on his way to becoming a saint. “He accepted his martyrdom there on the altar,” he said.

Guy Coponet still suffers from the wounds he sustained on 26 July. He has a deep scar on his throat and had trouble swallowing.

His wife Janine said she was convinced at the time that he had died.

The church at Saint-Etienne-du-Rouvray is due to re-open at a ceremony on Sunday.