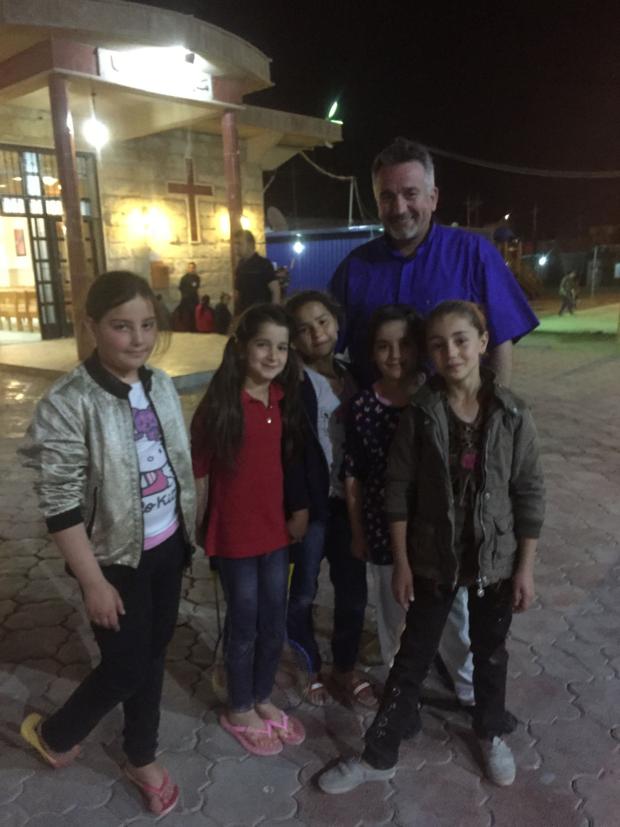 Father Douglas Bazi with Christian refugee children in Erbil, Iraq.
The news from the Middle East has become so grim I am always looking for a bright spot.
So, on a recent trip to Iraqi Kurdistan, it was a relief and a surprise to come across an upbeat story in an unexpected place: a church in Irbil that houses Christian refugees from northern Iraq who barely escaped the Islamic State invasion in August.

The first hint of something unexpected was the shrieks of children’s laughter when I entered the Mar Elias churchyard. The next surprise was seeing young boys and girls playing volleyball together on a paved court under improvised night lights, a sight I’d never seen in the gender-conscious Middle East.

This scene was a far cry from the dark days when the Islamic State overran ancient Christian towns in Nineveh province and 60,000 Christians fled to Iraqi Kurdistan, where they crowded into cheap apartments or churches or squatted in unfinished buildings.

The Kurds, who are Sunni Muslims but not Arabs, welcomed the Christians but couldn’t cope with the influx (having already accepted 200,000 Syrian refugees and previous waves of Christians fleeing Baghdad and Mosul).

At Mar Elias, 110 families, 564 people in all, jammed into its large grounds in Ankawa, a Christian suburb of Irbil. Mar Elias is a Chaldean, or Eastern-rite Catholic church, but the refugees included other Catholics and Syrian Orthodox. They were a confused angry crowd with hundreds of traumatized children.

“We had to use the church garden and an unfinished mall,” recalled Father Douglas Bazi, an ebullient Iraqi cleric with a brush cut and a short salt-and-pepper beard, wearing black slacks and an electric-blue short-sleeved shirt.

Under the priest’s direction, and with the contributions of local Christian volunteers, the refugees had morphed into a close community. With help from charitable groups and local volunteers, Father Douglas had moved them into brightly colored trailers, which line the edges of the churchyard.

And, gradually, the children began to laugh.

Having seen other, desolate refugee camps filled with desperate Christians (or Muslims) bereft of hope, and living in confusion, I can assure you that Mar Elias is not the norm.

What Father Douglas had decided to do was focus on young children and teens.

When the children arrived with their families “they were lost,” the priest recalled. “They were aggressive, and the boys used bad language.” There was no sense of order. He was determined to keep the kids busy, although the government was unable to provide formal schooling until two months ago. He set up programs staffed by volunteers from Ankawa and from among the refugees, to teach English, French, music, dancing, and acting — all the things that the Islamic State had banned.

He created a camp library in two trailers with donated books and computers and a huge chessboard, putting students in charge.

Still, Father Douglas has given himself an uphill task in an uncertain time.

“The future of Christians in northern Iraq is vague and the challenges great,” I was told by Chaldean Bishop Bashar Warda in his Irbil residence.

Tens of thousands of Christians have fled to Irbil from Baghdad over the last decade to escape violence and church bombings.

Until the violence in nearby Syria is halted, and the jihadis driven out of Mosul, there is no way Christian refugees can return home.

As for Father Douglas, he says he can’t say whether it’s better for Christians to stay or emigrate abroad, where they would lose touch with historic communities that have endured for generations.

So he will keep pursuing his goal: Give children the skills and a mind-set that will enable them to survive the coming years of hardship. “If I lose one kid, I lose the future,” he insists.