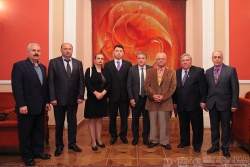 On April 25 the RA NA Deputy Speaker Eduard Sharmazanov received the Foreign Assyrian Delegation members Vasily Shumanov, Norman Solkha, Shiba Mandu, Sabri Atman, Arsen Mikhailov, Edvard Nadirshah and the representative of the Assyrian community in Armenia Anahit Khosroeva.
Welcoming the representatives of the brotherly people, the NA Deputy Speaker Eduard Sharmazanov thanked them for being here next to the Armenian people in these hard days and expressing grief. Touching upon the historical path passed of the two peoples, the NA Deputy Speaker has noted that not only numerous commonalities unite them, but also the pain of genocide perpetrated towards two peoples. In this context the NA Deputy Speaker has referred to the NA statement “On Condemning the Genocide of the Greeks and Assyrians Perpetrated by Ottoman Turkey” adopted by the RA National Assembly on March 24 of this year and has stressed that from now on Armenia will do utmost in order the civilized world will recognize and condemn the genocide perpetrated towards the Assyrians and Greeks, as, according to the NA Deputy Speaker, today keeping silence on the genocide is equal to a new crime.

The members of the Assyrian Delegation thanked the NA Deputy Speaker for adopting the NA statement “On Condemning the Genocide of the Greeks and Assyrians Perpetrated by Ottoman Turkey” and in their turn highlighted the consolidation of the efforts in the recognition and condemnation of genocides. The guests also thanked for the warm reception towards the national minorities, particularly, the Assyrian community and for giving them second motherland.

By the proposal of the NA Deputy Speaker Eduard Sharmazanov from now on every year on March 24 the representatives of three brotherly nations, Armenians, Greeks and Assyrians will visit the Tsitsernakaberd Memorial Complex and pay their tribute to the memory of the innocent victims. 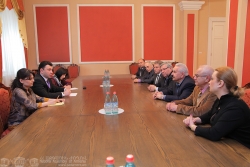 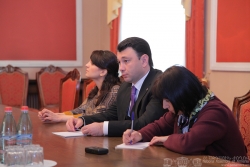 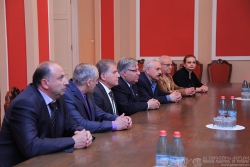