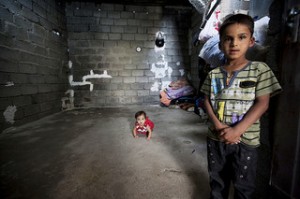 by Paul Louis Metzger
What good is religion, anyway? Religion is extremely good, when it promotes radical love in the face of extreme hate. I was deeply moved by the video of Christian girls in Erbil, Iraq, who were interviewed after they and their families were displaced from their homes by ISIS. My friend Adam Estle at Evangelicals for Middle East Understanding made available this video link in his recent EMEU Weekly Communiqué, which you can find here.
How would we respond if we were displaced from our homes and faced the threat of loss of life? Would we want revenge? Would we curse God for not removing such terrors as ISIS from our midst?
Iraqi Christian schoolgirls Flourine and Maryouma spoke of their hope in Jesus and his abiding presence. Ten-year-old Maryam shared that she was grateful to the Lord for his provision and providential care: she rejoiced in God’s love and his protection in not allowing ISIS to kill them. She also spoke of forgiving ISIS for driving her family from their home. The video closes with children laughing and singing of their eternal hope in Jesus and their love for him.
As I reflected on this video and interviews, I was reminded of the Psalmist’s words: “Out of the mouth of babies and infants, you have established strength because of your foes, to still the enemy and the avenger” (Psalm 8:2, ESV). Whether “the enemy and the avenger” is ISIS or those like some of us who would not account for God’s providential care, God will confound and silence all of them through these little ones’ small voices (See the Cambridge Bible for Schools and Colleges’ engagement of “enemy” and “avenger” in this verse at this link; see also Matthew 21:16 for Jesus’ use of this text in the context of Matthew 21 and the growing opposition to him).
The story of radical love does not end there. Christians in Kirkuk, Iraq have opened their church to care for displaced Muslims, having themselves been displaced by ISIS: “Imad Matti and his congregation decided to support these Muslim students, paying their rent, giving them food, and even inviting them to live in the homes of Christian families or in their churches” (See this article by Preemptive Love Coalition).
There have been countless references over the years to the warfare involving Christians and Muslims, and the horrific things they and their respective political powers have done to one another. We must never discount or forget these accounts so that we don’t repeat them. Nor should we forget tales of Christians and Muslims caring for one another as neighbors and friends in the midst of severe strife, as the movie Of Gods and Men documents so powerfully.[1] The aim of remembering such acts of care is so that we do repeat them!
Together with the accounts of these displaced Christians noted above, such stories of radical love reveal that religion is not always bad, but can be incredibly good. They remind us that the kind of religion that God desires for us to embody involves caring for the orphan, widow, and alien in their distress—just as God cares for them (Leviticus 19:34; Deuteronomy 10:18-19; James 1:27), loving our enemies—as God does (Matthew 5:44; Luke 6:27; Romans 5:8), and, in view of God, loving our various neighbors as ourselves (Mark 12:30-31; Luke 10:25-37).
God’s love is never displaced. In fact, God’s love is most at home in loving his and our enemies. What kind of religion do we embody? Displaced or not, will we place emphasis on forgiveness and sacrificial love?
_______________
[1]See here for The New York Times movie review of the film. One would also benefit from reading the moving account of The Monks of Tibhirine: Faith, Love and Terror in Algeria. The book and movie center on a Cistercian Trappist monastery and its Muslim neighbors in Algeria during the civil war in the 1990’s.