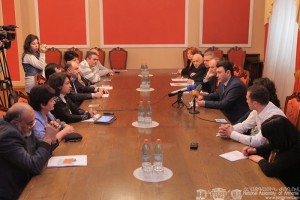 In the NA Deputy Speaker’s word, unless the civilized world condemns such crimes perpetrated against humanity, the possibility of their repetition is big. He has considered inadmissible the denial policy still existing in the 21st century.

The NA Deputy Speaker has informed that he has consulted with the deputies included in the NA different factions: their viewpoint on the draft statement is positive. The parliament designs to adopt it during the upcoming spring session.

At the end of the meeting the guests in the name of the communities thanked the NA Deputy Speaker for the expected initiative, as well as submitted recommendations, which related to the further cooperation.