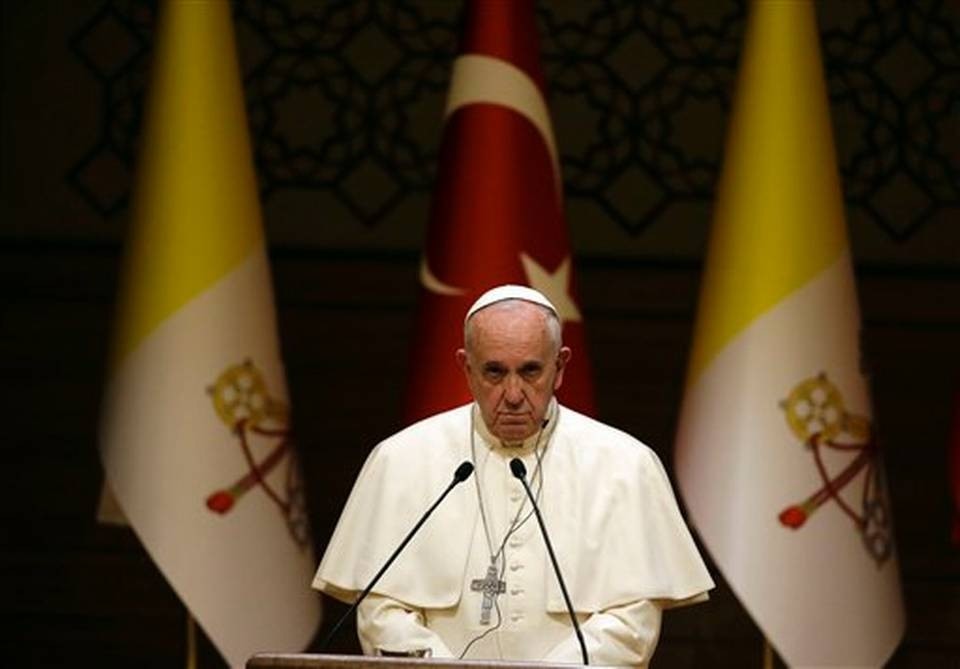 Associated Press ANKARA, Turkey
Pope Francis urged Muslim leaders to condemn the “barbaric violence” being committed in Islam’s name against religious minorities in Iraq and Syria as he arrived in neighboring Turkey on Friday for a delicate visit aimed at improving interfaith ties.

Francis sought to offer a balanced message as he met with Turkish political and religious officials at the start of his second trip to the Middle East this year. He reaffirmed that military force was justified to halt the Islamic State group’s advance, and called for greater dialogue between Christians, Muslims and people of all faiths to end fundamentalism.

“As religious leaders, we are obliged to denounce all violations against human dignity and human rights,” Francis told Mehmet Gormez, Turkey’s top cleric and other religious officials gathered at the government-run Religious Affairs Directorate. “As such, any violence which seeks religious justification warrants the strongest condemnation because the omnipotent is the God of life and peace.”

Francis condemned the “barbaric violence” by IS against Christians, Yazidis and other religious minorities and the destruction of their places of worship.

The Vatican has voiced particular concern about the expulsion of Christians from communities that have had a Christian presence for 2,000 years and has demanded that they be allowed to return home in safety once the conflict settles.<!– OAS_AD(‘Middle’); //–>Francis’ three-day visit to the Muslim nation comes at a sensitive moment for Turkey, as it struggles to cope with 1.6 million refugees fleeing the IS advance in Syria and weighs how to respond to U.S. calls to get more engaged with the international coalition fighting the extremists. Turkey has accused the group of casting a shadow over Islam and has said Muslim countries have a duty to stand up against its radical views. But Turkey is still negotiating with the United States over helping the coalition, pressing for a safe haven and a no-fly zone along the Syrian border with Turkey and demanding the coalition go after Syrian President Bashar Assad’s regime.Turkey has long been accused of turning a blind eye to IS fighters entering Syria from its territory in the hope that it would hasten Assad’s downfall — charges it denies.“Those who veer away from the message of Islam — which is a call for peace — and spread violence and savagery are in a state of rebellion against Allah no matter what they call themselves,” Gormez told the pope in stressing Turkey’s opposition to the fundamentalists.He and President Recep Tayyip Erdogan both complained about rising Islamophobia in the West, with Erdogan saying prejudices against Muslims were helping fuel radical Islamic groups such as the IS in the Middle East and Boko Haram in Africa. – See more at: http://www.vindy.com/news/2014/nov/29/pope-urges-opposition-to-is/#sthash.mYzFDIeL.dpuf