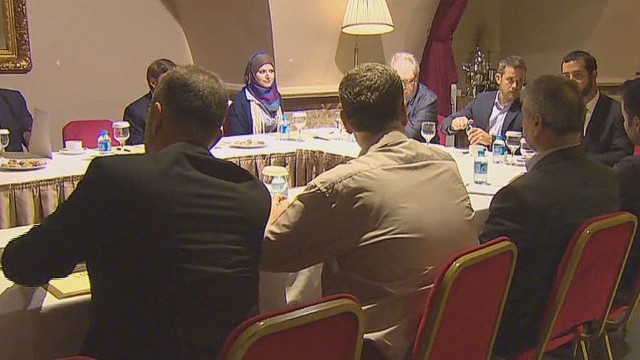 By Scott Bronstein and Drew Griffin, CNN
Antakya, Turkey (CNN) — More than 20 Syrian rebel commanders, including members of Christian opposition groups, have signed off on what they called a historic agreement to unite in the fight against ISIS and President Bashar al-Assad’s forces.

The deal came out of a meeting Thursday in Turkey facilitated by staff from the U.S. House Foreign Affairs Committee and the Washington-based Syrian Emergency Task Force. Two U.S. congressmen sat in on the final negotiations between the groups, just days after Congress signed off on President Barack Obama’s call to arm and train moderate rebels to fight ISIS.

Under the agreement, moderate Muslim rebel groups fighting under the Supreme Military Council of Syria agreed to form an alliance with the predominantly Christian Syriac Military Council. It marks the first meeting between Syrian rebels and members of Congress since Obama announced the new policy.
Envisioning a free Syria

The agreement calls for the groups to work together to assure any free Syria will be inclusive of all ethnic, religious and political parties. While the group called it historic, it may at this stage be only a symbolic gesture given that these groups are already fighting alongside each other against al-Assad’s forces and ISIS.

Among the groups that met with Republican Rep. Adam Kinzinger of Illinois and Rep. George Holding, R-North Carolina, was the Supreme Military Council of Syria and the Syriac Military Council, made up of Christians. CNN was the only news agency present at the meeting.

It is unclear when the groups might receive the arms and training they’ve been promised. It’s also unclear if all of the groups present will benefit.

This is not the first time that groups opposed to ISIS have agreed to fight together. Previous efforts faltered, sometimes over ethnic and religious divides.

U.S.-led airstrikes on ISIS in Syria: Who’s in, who’s not

While the Supreme Military Council of Syria includes the Free Syrian Army, which is considered one of the leading moderate forces, there are questions about other members of the alliance.

The Syrian Revolutionary Front reportedly signed a deal with ISIS in one suburb in Damascus, and another — the Hazzam group — put out a statement this week condemning U.S. airstrikes.

“Well, I think the question has been answered,” said Khalid Saleh, the spokesman for the National Coalition for Syria.

How Obama came to launch strikes in Syria

He said the Free Syrian Army brigades, which have been receiving aid for months, have been vetted, and he called for an increase in the flow of aid and support to them.

Airstrikes are not enough

The rebel groups told CNN that coalition airstrikes against ISIS targets were not enough. The strikes must also hit al-Assad’s forces, they said.

“This is a partial strategy. It’s a containment policy that did not work and will not work,” Saleh said.

“We need to deal with this problem at its root cause: Assad, the gangs that support him and ISIS. Those are the three problems every Syrian deals with.”

The groups were also critical of the way the strikes were being carried out.

“We also delivered a message how Syrians are upset about the killing of civilians from these strikes,” said Abdul al-Bashir, head of the Supreme Military Council.

Notably absent at the meetings, but very present on the Syrian battlefield, were jihadist groups who have also been fighting ISIS and al-Assad’s government, including the Islamic Front and the al Qaeda-linked al-Nusra Front.

The groups have been blacklisted and sidelined by the United States, but critics have said cutting them out will weaken the effectiveness of the coalition on the ground.

“We do want to make sure that we don’t put weapons in the hands of the wrong people,” Kinzinger told CNN.

Pentagon spokesman on fighting ISIS: ‘I think we are in this for a matter of years’