Call for aid and US air strikes as Isis extremists’ advance on Kobani triggers unprecedented flood of refugees
A Turkish soldier stands guard as Syrian Kurds cross the border fence into Turkey near the southeastern town of Suruc. Photograph: Reuters

More than 70,000 Kurds fled from northern Syria into Turkey at the weekend and tens of thousands more are trying to cross the border as the terror group Islamic State (Isis) intensified its assault on a crucial Kurdish safe haven near the border.

A rearguard of Kurdish fighters and civilians has remained in the town of Kobani, less than 10 miles from the border, in an effort to fight back Isis forces, which have stormed more than 50 nearby villages as they advance towards the third largest Kurdish hub in Syria.

The attack is a direct challenge to the Kurdish presence in the area and follows a pattern, set by Isis since June, of attacking minorities on either side of the frontier between Syria and Iraq.

Previous attacks have targeted Yazidis, Christians, Kurds and Shia Turkomans in Iraq, and Alawites, Shias and Christians in Syria, forcing most to flee. Those captured have been given the stark choice between converting to the jihadists’ hardline view of Sunni Islam or being killed.

The refugee agency UNHCR said it was preparing for up to several hundred thousand more refugees to cross into Turkey in the coming days and called on Ankara to provide space for the Kurds to shelter. The global aid body said its staff were helping provide refugees with immediate needs.

Turkey said that by noon on Sunday it had allowed 60,000 Kurds to enter its territory – an unprecedented volume of new arrivals even by the standards of a country that has taken in almost 1.35 million refugees since the Syrian war broke out in 2011.

“These are 80% women, children, disabled, elderly, who need our help,” the UNHCR’s head in Syria, Carol Batchelor, told al-Jazeera television. “We need to be able to say to the Syrian people, and to the host communities who have been helping them for three and a half years, that they have solidarity and their humanitarian life-saving needs will be met.”

Kurds have become increasingly central to the battle for control of Iraq and Syria, which is steadily changing the face of the region. Kobani, known as Ain al-Arab to the Arab population, is of vital strategic importance to Isis, standing as it does in the way of the group’s attempts to dominate much of the northern border area and push further east towards Iraq. 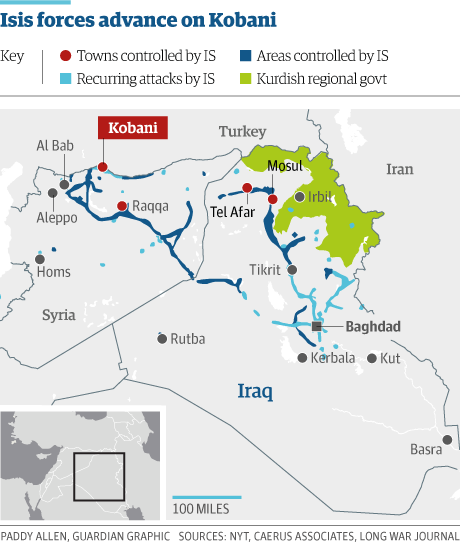 The current attack is the third push against Kobani since June, and comes as Isis has stepped up its rhetoric against the Kurds, whom it denounces for being secular.

An earlier attempt by Isis to storm Kurdish northern Iraq in August was attacked by Kurdish and European leaders as an attempted ethnic genocide and led to Britain, France and the US arming the Kurdish peshmerga force.

The US launched airstrikes in defence of Irbil, which were credited with stopping the immediate threat to the region, and with saving the Mosul dam, which had been seized two weeks earlier.

At the same time, the Kurdish YPG militia now defending Kobani crossed into Iraq in mid-August to help rescue up to 50,000 Yazidis who were besieged by Isis on Mount Sinjar. That escape was aided by US airstrikes, which scattered the jihadis from the northern base of the mountain.

Now, Kurdish leaders are calling for Barack Obama to repay the favour by sending the US air force to give it cover from Isis on its own soil. YPG forces say they are being outgunned by Isis, which is using heavy weapons supplied by the US to the Iraqi military, who surrendered them when they abandoned northern Iraq in June.

The US president has said he has authorised US airstrikes inside Syria, in addition to Iraq, and is building a coalition of allies alarmed by the rapid growth of the jihadist group and the threat it is increasingly posing to the region’s borders.

The Isis rampage through Iraq has already led to some unlikely alliances being formed, with US jets flying air cover over the Shia Turkoman town of Amerli earlier this month in support of Shia militias led by the Iranian Revolutionary Guard. An elite leader of the guards, General Qassem Suleimani, was on the ground in Amerli as the US jets attacked Isis positions.

Potentially complicating US support for the Syrian Kurds is the fact that the Kurdish Workers Party (PKK), which directly supports the YPG, is on Washington’s list of proscribed terror groups. However, that was ignored in August when the YPG was instrumental in securing an exit for the Yazidis.

On Friday France sent two air force jets to attack Isis positions in northern Iraq, but Paris insisted it would not authorise operations inside Syria. Saudi Arabia has said it will allow countries training anti-Isis rebels to use its bases and has signalled that it may be prepared to play an overt role in attacking the group. Britain is also under pressure to join the fray now that the Scottish referendum is over.