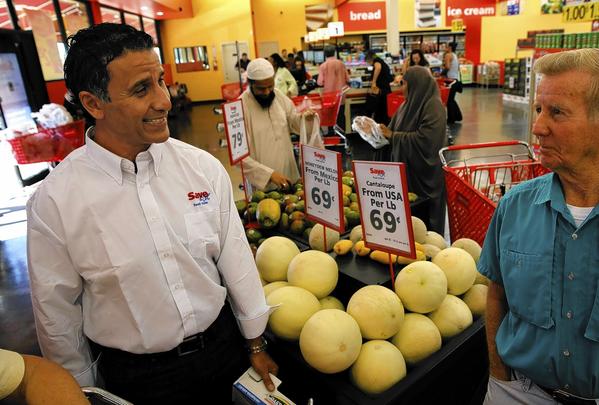 The ethnic group is united by its Christian faith, Aramaic language and entrepreneurial zeal, but the two chambers have been less-than-friendly rivals.
Chaldean businessman Amad Attisha
Amad Attisha, left, a Chaldean who owns several businesses including Save a Lot market in San Diego, talks with a customer. (Don Bartletti, Los Angeles Times / January 15, 2014)
By James Barragan

Everyone in metropolitan Detroit knows who the Chaldeans are.

They came to the Motor City in droves during the 1920s, lured by high wages at Henry Ford’s automobile plants. Since then, they have grown to a population of more than 120,000 in Detroit — the largest in any area outside their native Iraq — and hold substantial clout in the area’s business and political circles.

Now, two competing organizations want everyone in California to know the ethnic group, which is united by its Christian faith, Aramaic language and entrepreneurial zeal.

“The perennial issue is that there was a void for a statewide organization to represent our interests at the local, state and federal level, as well as internationally,” said Johnny Oram, a former board member of Michigan’s Chaldean chamber who founded the Chaldean American Chamber of Commerce of California in November. “We’re filling that void.”

Although the two groups have similar plans — the mixers, workshops and lobbying common among chambers of commerce — the organizations have been less-than-friendly rivals.

Kalasho sued Oram and a prominent backer in December, alleging trademark infringement among other things. Kalasho’s lawsuit alleges that Oram’s group stole his logo and interfered with the working of Kalasho’s organization, which he contends is the original Chaldean Chamber of Commerce in the area.

Oram said the lawsuit is “frivolous.”

“I’ve tried working with him, tried reaching out to him through various [intermediaries] and he’s taken the undiplomatic road,” Oram said. “He’s trying to stifle competition.”

Despite their differences, the groups share the mission of promoting the interests of Chaldean enterprises, and a big part of that involves introducing Chaldeans to California.

“Lots of people are going to ask, ‘Who are the Chaldeans and where do they come from?'” Oram said. About 72,000 Chaldeans live in San Diego County, where the chamber is based, with thousands more across the state, he said.

Kalasho, whose group has more than 120 members, said there should be more organizations to help Chaldean businesses assimilate into American culture, which is the goal of his organization.

When Chaldeans first immigrated to the United States, they bought small businesses, such as grocery stores. They continue to own small enterprises, but nowadays they are also doctors, lawyers and politicians — professionals whom Oram said his chamber will focus on attracting. Kalasho, who owns a gasoline station and a carwash, is concentrating on small firms.

Despite the progress made by Chaldeans, some people have negative perceptions of the community, Oram said — a situation highlighted last year when El Cajon Mayor Mark Lewis was accused of making derogatory comments about Chaldeans during a magazine interview.

Lewis was quoted in the Progressive as saying that some Chaldean children get a free school lunch and then are “picked up by Mercedes-Benzes” and that Chaldeans arrive in America and soon learn “where all the freebies are at.”

Bill Wells, who replaced Lewis as El Cajon mayor, said he welcomes efforts by the Chaldean business community to band together.

“It’s good for any group to organize and interact with the business community,” Wells said. “Over the last 10 years or so, the Chaldean population has grown from almost nothing to now being a big part of the landscape, and we’re really aware of the power base in the Chaldean community.”

Despite its short tenure, Oram’s group already has attracted some significant backers.

“Our $100,000 donation to Oram’s chamber was a signal of collaboration between our two organizations to achieve a greater good,” Arabo said. “We hope that this money serves as a platform toward a new narrative for the Chaldean people.”

Wadie Deddeh, a former state legislator of Chaldean descent and resident of San Diego, was named an honorary co-chair of Oram’s group. Deddeh said he’s been asking Chaldeans to form a business group for years.

“We are unfortunately not as organized as we could be, but you’ve got to keep pushing them,” Deddeh said.

Amad Attisha is one of more than 200 members that have joined Oram’s chamber. He said he signed up to help develop other businesses in the Chaldean community and to benefit from the political advocacy the group could provide.

“I don’t have the luxury or time to talk to politicians who don’t understand the Chaldean” culture, said Attisha, the owner of several businesses including gasoline stations, supermarkets and car washes.