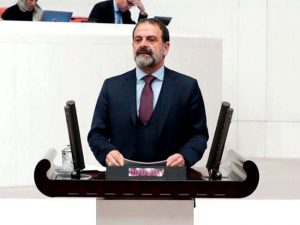 Opposition lawmaker Tuma Celik, from the pro-Kurdish Peoples’ Democratic Party, is the only Syriac lawmaker in the Turkish parliament. (Photo/Supplied)
Hundreds of Syriacs, an ancient Christian population with Aramaic as their mother tongue, have left Turkey since the 1990s to Europe
JEDDAH: A Turkish court has jailed a Syriac monk for helping the outlawed Kurdistan Workers’s Party (PKK).

Aho Sefer Belican led a community in the Mor Yakup Monastery in Turkey’s southeastern province of Mardin, the Syriacs’ ancient homeland. Two other Syriacs were also detained on Jan. 9 over allegations that the three of them provided food and water to a PKK member.

The PKK, which has waged an insurgency for independence in the country’s southeast for more than three decades, is deemed a terrorist organization by Turkey, the US and the EU.

David Vergili, a Syriac activist who is also a close friend of Belican’s, said the monk was a humble person who was much admired by his circle and outsiders.

“He was an ascetic for years, living in seclusion from society for religious reasons,” Vergili told Arab News. “He was also actively working for the restoration works of the monastery in a bid to further attract Turkish and foreign visitors. It is very sad and unexpected news to hear that he is imprisoned. Currently all Syriacs around the world talk only about one thing — the imprisonment of their monk.”

Opposition lawmaker Tuma Celik, from the pro-Kurdish Peoples’ Democratic Party, called on authorities to reverse the decision and said the accusation was based on a single statement in an investigation dossier that was opened two years ago. Hundreds of Syriacs, an ancient Christian population with Aramaic as their mother tongue, have left Turkey since the 1990s to Europe over security and restrictions on religious freedom.

The 1,500-year-old Mor Yakup Monastery lies about 250 meters from the Syrian border and sits atop a rocky hill in a remote place. It was accepted onto UNESCO’s World Heritage tentative list in 2014.

Turkey’s Human Rights Association Commission Against Racism and Discrimination published a report highlighting rights violations against a Syriac nun, Verde Gokmen, who lives alone in the ancient church of St. Dimet in Mardin. She was threatened by a local mob, who said they would kill her if she did not leave the village.

Its report also claimed that Syriac churches and monasteries were “constantly exposed to the destruction of treasure hunters.”

Vergili said there were about 300,000 Turkish-origin Syriacs in Europe. Some Syriacs returned to Turkey in the early 2000s, but many felt unwelcome there.