By Miriam Raftery
Three incumbents and four challengers are vying for three seats on the El Cajon City Council. ECM has requested interviews with each. Below is the first in our series of in-depth candidate profiles.

September 6, 2012 (El Cajon)—Earlier this year, when a vacancy opened on the El Cajon Council due to a resignation, the Councilmembers refused to accept applications from the public – including an Iraqi Chaldean immigrant and an African-American woman who wanted the job. Instead, they appointed an insider like themselves–a white male, who served on Planning Commission.

To Ben Kalasho, that action exemplifies what’s wrong in El Cajon –and why the Council needs people from diverse backgrounds.

“After getting married and resettling back in El Cajon, I saw our community here lacking representation, Kalasho told ECM. “El Cajon is so diverse. We have 38% Christian Iraqis and we are 28% Hispanic.” The City also has 5,000 Kurds and an 8% African-American population. “We need better leadership….We have an obligation to hear from everyone. What better way than to have a candidate who speaks four languages?” says Kalasho, who speaks Aramaic, Arabic, Spanish and English. His wife, a dental hygienist, is Hispanic.

Kalasho, a Chaldean Christian, was born in Iraq and came here in 1990. Like many immigrant families, his came here seeking opportunities for a better life—and found it. Kalasho studied Economics at the University of California, San Diego and has worked in real estate. His sisters and brothers are all college graduates, and two are now in medical school. Kalasho and his father now o own several businesses including the county’s first eco-friendly gas station and car wash, as well as rental properties.

“You’re not going to find a guy who’s more American than I am,” says Kalasho, who believes he has the strongest business background needed to understand the needs of small businesses that are struggling and to create jobs in El Cajon, which has among the highest poverty rates in the county. He also has empathy for those newcomers here who lost homes in war-torn countries—and he wants to help people from all backgrounds attain success.

“We need jobs, jobs jobs– I don’t care if you’re Chaldean, Mexican-American, white or black. The crime rate will fall if we have jobs. That’s the answer,” he says.

More than 50 El Cajon business owners have endorsed his campaign.  “They are fed up and angry with the Council’s miscalculation about revenue generators regarding car shows and concerts. Those are good, but they’re not enough.”

He faults the Council for having the County’s highest sales tax rate in a community with one of the highest poverty rates.   “In order for a city to raise funds, turning to sales tax right away equals failure,” he says.  He blames the high sales tax for keeping some new businesses from relocating in El Cajon, citing Bev Mo and Costco as examples.

To bring fiscal stability to the city he wants to find additional ways to raise revenues such as attracting new businesses.  El Cajon needs to be more business friendly, he notes, citing as an example the city taking two years to approve permits for a new restaurant owner while the business paid a lease for two years, costing the owner tens of thousands of dollars.

He also wants to provide more help to businesses that are already here, such as starting a Taste of El Cajon to showcase the city’s diverse range of restaurants, and launching a Multicultural Festival to celebrate the area’s rich cultural heritage.  He would also urge the city to buy local and support El Cajon businesses through its own purchases such as office supplies and printing.

“The backbone of this city are the immigrants who came to this country for a better life, and they’re looking to elect leaders to do their part,” he says.

Development issues and the arts

Kalasho is critical of the council for making sweetheart deals with developers and friends.  “We should cut runaway spending on special interest groups—favors on development that don’t benefit the general public and projects that only benefit one person.”

He opposes the Council’s prior effort to shut down the East County Performing Arts Center, a move that would have cost taxpayers $2 mililon for the tear-down.  He believes the facility could eventually be reopened and once again became a draw to bring arts patrons from throughout the region into downtown El Cajon.

“The Council’s priorities are out of whack. They spent millions on remodeling a duck pond,” he says of Council’s failure to fund less costly repairs needed to reopen the theater.  “I put a financial model together for the ECPAC Foundation.  With the right management it could be successful.”

He also sees potential to boost revenues by attractive private jet traffic to Gillespie Field and building a parking lot with parking fees for visitors.   He would favor a hotel, but only in the right location.

His plans improve transportation include a figure-eight loop for an eco-friendly, hybrid shuttle to ferry passengers from trolley stops to the downtown and Parkway Plaza shopping areas to boost sales, as well as to major events such as the Centennial celebration and Mother Goose Parade.   He also supports synchronizing traffic signals to make it easier for people to drive through El Cajon. 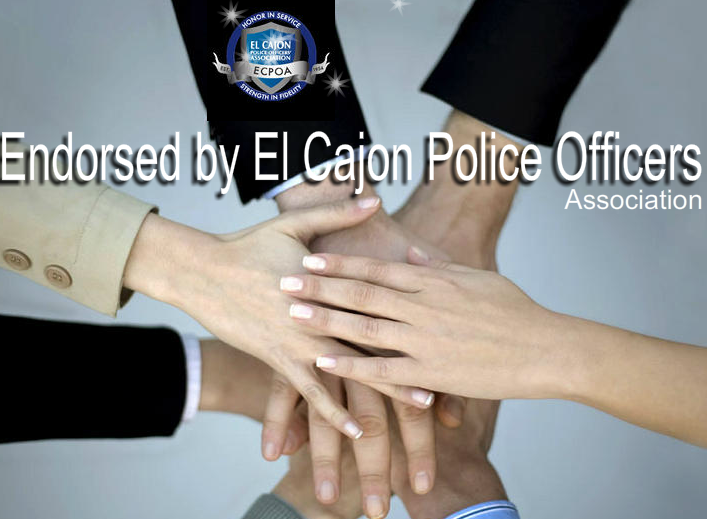 Kalasho’s number one priority, however, is public safety.  He is endorsed by the El Cajon Police Officers Association and says he’s learned a lot about crime problems through a ride-along and meetings with police, as well as by walking door-to-door meeting voters during his campaign.

“In El Cajon, if your vehicle gets stolen you’re out of luck,” he says of the lack of resources to investigate such crimes.  “Also, the database that used to keep DUI records was defunded.” He points to graffiti in communities, abandoned shopping carts and prostitution as problems that need to be solved.

“We’re losing a lot of safety officers,” notes Kalasho, who says neighboring cities pay more.  “The result is we are losing the best of the best, people like Jared Slocum who took a bullet for us all.”

He believes that a city’s image is reflected by how its downtown looks, but also by public safety.  “It needs to leave people in awe –and they have to feel safe.”

Kalasho faults the Council for lacking cultural sensitivity and at times,  acting in a discriminatory manner.

“We need more understanding of diversity. Not everyone wants to open up a hamburger joint.” For example, he said the Subes, Iraqi Baptists, have long made their living as gold merchants.  When a Middle Eastern man who owned a pawn shop wanted to sell gold, the city said no.  “But a couple of months later, they gave Leo Hamel a lease to sell gold,” Kalasho said of an established San Diego jeweler.

Similarly, the Council cracked down  with an ordinance banning card rooms, in reaction to a single card room where criminal activities allegedly took place.  “The British have tea as their social time. Chaldeans play card games,” says Kalasho, who thinks it is wrong to target the entire Chaldean community because of a few who broke the law, as can happen in any culture.

He sees the city’s ban on smoking in outdoor dining areas and crowds as “racist”, too.  “I don’t smoke,” he said, but added that there are “freedom issues.”  Many Middle Easterners own convenience stores and gas stations, relying on cigarette sales as a big part of their business.  “If the only place people can smoke is in their homes and cars, that hurts the business owners,” he said.

Kalasho himself has been the target of bigotry, both in the current campaign and a prior race for a council seat in Santee, where he previously lived.  There his campaign signs were targeted with anti-Arab graffiti—though ironically, Kalasho is not Arab. (Note: a newspaper reporter at the time reported he was Polish, an error Kalasho attributes to misunderstanding his statement that  he’s not Arabic but that it doesn’t matter if he’s Polish or Chaldean, racism is wrong.)

He opposed the Charter City initiative, now law.  “Any time you give city officials more power, it always causes problems,” he concludes.

In a city where some council members have denigrated renters as negative elements in the community, Kalasho observes, “Whether you are a renter or a homeowner, you deserve respect.”  He wants to build a community where people will want to live, regardless of their housing status.  “You decide where to live based on whether the schools are good,  if there are beautiful parks and recreation, good infrastructure and jobs…It all works together.

To win, he is wearing out shoe leather going door to door. He and his wife have registered nearly a thousand Chaldeans to vote. “That’s going to be a force,” he predicts.  His campaign is also working to register Hispanics and other minorities.

He believes single-issue voters do the community harm in some local races.  “The issues this council has are not partisan,” Kalasho concludes. “They’re common sense.”

Correction: An earlier version of this article quoted the candidate stating that incumbents lacked business experience. In fact, Tony Ambrose is a partner in a planning and land use firm, Bill Wells is a hospital administrator, and Bob McClellan owned McClellan Buick, now closed.