BBC News, Lebanon
Christian refugees describe how they have been forced to flee Syria
The woman was clearly frightened. Over and over again she explained that the world should know about what was happening to Christians like her inside Syria.

But she would not appear on camera or even allow her voice to be recorded.

“My husband does not want to draw trouble on us by speaking out,” she said.

The family had fled Syria for Lebanon because it was simply too frightening now for Christians, she insisted.

Although I met Christian refugees with widely differing political opinions, all were afraid of being targeted if they spoke publicly.

In several months of meeting refugees from across Syria, these were the most frightened people I had encountered.

“Michel” agreed to be interviewed on condition we disguised his identity.

He chain-smoked and had the pallor of a man who struggled to sleep.

The trouble began, he explained, after the first demonstrations against the regime. He had supported these.

“Then suddenly arms were being used and there were Arabs from different countries,” he said. “They broke into Christian houses and accused them of blasphemy.”

He said his own house was targeted when he was away, but his wife and two young children were at home.

“It was indescribable fear. They burned tyres in front of the house and wanted to burn the house,” he said.

“[My wife] took the children and was jumping over walls from one street to another until they managed to escape.”

There have been consistent reports of violence directed against Christians in Syria since the uprising began in March 2011, including attacks on churches.

Continue reading the main story
“
Start Quote
We don’t think Syria is a place where you could have a religious state because Syria has different religions different ethnic groups, different races”
End Quote
Molham al-Drobi

Syrian Muslim Brotherhood
But because the authorities severely restricts independent reporting it is not possible to verify these reports.

Nor is it possible to analyse how many of these attacks arise from sectarianism, and how many are directed against Christians because some are seen as supporters of the regime.

Christians form an estimated 10% of Syria’s population and their community in Damascus is one of the oldest in the world.

They enjoyed religious tolerance under the rule of President Bashar al-Assad and his father, Hafez. Several rose to prominent positions in the government.

Patriarch Gregorios III of the Melkite Greek Catholic Church, the largest Catholic congregation in Syria, has warned against foreign intervention in Syria and accused the media of misrepresenting the situation in the country.

He acknowledges that some of the violence has been motivated by a perception that Christians support President Assad.

Yet the picture is more complex, the range of Christian opinions is wider.

Near the ancient town of Byblos, I met representatives of several families, all of whom had fled in the last six months.

A man who gave his name as Hisham said they had been driven out of Homs by government shelling.

“Before the violence people were living normally… but the regime was bombing everybody. They didn’t differentiate between Christian and Muslim and this is why we had to flee Syria.”

I asked one of the women in the group, a mother whose husband had been killed and who fled to Lebanon with her young daughter, if she felt Christians had a future in Syria. 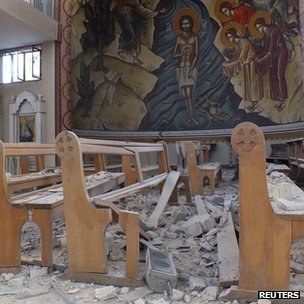 “No. I see no future, not only in Syria but in all the Middle East. If people get a chance to leave this region they will just do it,” she replied.

Looming in the minds of Christians – be they pro- or anti-regime – is the experience of their co-religionists in Iraq.

At least half the Iraqi Christian population is estimated to have fled the country amid the sectarian violence that followed the US-led invasion in 2003.

Many went to Syria, believing it to be a haven of religious tolerance.

In Egypt, Coptic Christians have faced marginalisation and attacks.

The Assad government has warned Christians and other minorities of the persecution they could face at the hands of Islamists should the regime fall.

While there are prominent Christians in the main opposition grouping, the Syrian National Council (SNC), there are concerns about the influence of the Muslim Brotherhood, the Islamist movement that was almost annihilated by Hafez al-Assad in the early 1980s.

The events of the Arab Spring have revitalised Syria’s Brotherhood.

However one of the group’s leaders, Molham al-Drobi, told the BBC that Christians had nothing to fear.

The Muslim Brotherhood would not try to establish an Islamic state.

“We are not working towards a religious state,” he said.

“We don’t think Syria is a place where you could have a religious state because Syria has different religions, different ethnic groups, different races.”

In today’s fearful atmosphere many Christians will struggle to accept that assurance.