On the occasion of the 10th anniversary of the establishment of the Chaldean Catholic Diocese of Saint Peter the Apostle, drop by the diocesan website and pay our brethren a visit. Click here.

The 10th Anniversary Celebrations and the 5th Biennial Youth Convention is taking place at St. Peter Cathedral from Thursday, July 19 to Sunday, July 22, 2012.

Throughout the weekend, there will be different activities commemorating the 10th Anniversary of the establishment of the Chaldean Catholic Diocese of St. Peter the Apostle. A major part of the celebrations is the 5th Biennial Youth Convention.

During the weekend, there will also be the live performance of the play, “Amerta Myusarta”, a Seminar on Public Issues and a Language Symposium, as well as the Bishop’s Banquet taking place on Saturday evening.

The celebrations will end on Sunday with the Sub-Deaconate Ordinations of four Seminarians from the Seminary of Mar Abba the Great.

There is also live television. 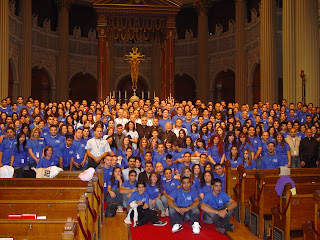 Who are the Chaldeans?

Christianity entered Mesopotamia from the beginning of the Christian era, and many natives of that land became Christians. Around 634 A.D., Moslem Arabs conquered the region, and Islam was imposed as the religion of the state, and became gradually thereafter the religion of the majority; the Arabic language and culture became as well the language and culture of the majority. Christians remained what they were, i.e. the descendants of those ancient inhabitants of Mesopotamia and the heirs of their cultural heritage. Therefore, present-day Chaldeans and Assyrians are precisely that: ethnically, they are the descendants of the ancient inhabitants of Mesopotamia; culturally, they are the heirs of their Aramaic language and heritage.