Hama skyline (file) Stradding the River Orontes, Hama was settled as long ago as the Neolithic age
The Syrian city Hama has become synonymous with the ruthless determination of the Assad family to stay in power.

At least 10,000 people were killed when the late President Hafez al-Assad sent in the military to crush an Islamist insurrection there in 1982.

Thirty years later, similar tactics are reportedly being employed by his son, Bashar, as he attempts to end a nationwide uprising.

Despite – or perhaps because – of its history, Hama has seen some of the largest protests, as well as some of the bloodiest crackdowns.

Located on the River Orontes, about 305km (190 miles) north of the capital Damascus, Hama was settled as long ago as the Neolithic age.

The Aramaean kingdom of Hamath is said to have traded with Israel during the reigns of the biblical kings, David and Solomon.

Hama became an important agricultural and economic centre during the Assyrian, Roman and Byzantine eras, during which time huge wooden waterwheels, or norias, began to be built along the banks of the Orontes. 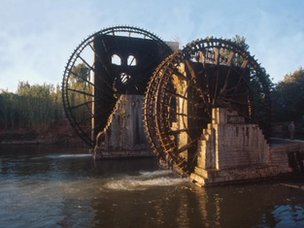 Ten of Hama’s famous wooden waterwheels, or norias, still stand on the banks of the Orontes

Between 10m (33ft) and 22m in diameter, the norias raised water to aqueducts, which supplied water for drinking and irrigation. Ten survive to this day.

After Hama was captured by the Arabs in 637AD, they transformed its main Christian church into a great mosque. Although many Christians still live there, over the centuries Hama became a stronghold of socially conservative Sunni Muslims.

As early as 1964, Hama was said to have been the centre of a nationwide revolt by the Sunni majority against the secular and socialist policies of the Baath Party, which had seized power in a coup the previous year.

The government sent troops and tanks into Hama to put down the uprising with great brutality, leaving as many as 100 people dead.

The tactic was to be repeated on a far larger scale 18 year later.

After Hafez al-Assad took power in a coup in 1970, there were widespread protests, as well as agitation for democratic reforms and the rule of law by secular activists.

Meanwhile, underground Sunni Islamist opposition groups, including the Muslim Brotherhood, were involved in violent attacks on officials from the minority Alawite-led government and its supporters.

The unrest culminated in a rebellion in Hama in February 1982.

Witnesses said the uprising began early on 3 February, when government soldiers attempted to raid a building in the city where they believed a Muslim Brotherhood leader was hiding. But the soldiers found themselves surrounded and they were killed.

Mosque loudspeakers were used to call for a revolt against the Baath Party. By the morning, many leading Baathists had been killed, security forces installations raided, and Hama proclaimed as “liberated”.

“For about the first four days of the confrontation… the people controlled the city,” an American businessman who was visiting the city at the time told the BBC. “The army was losing the battle and losing it badly, so the government called in their special forces… to help quell the rebellion.” 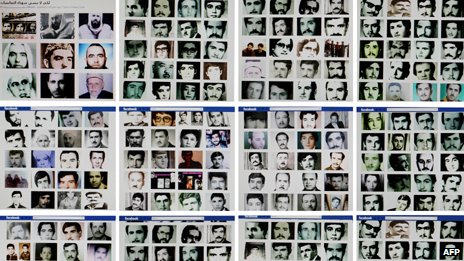 It was not long before thousands of troops, led by President Assad’s brother Rifaat and his elite, Alawite-dominated Defence Brigades, arrived to take back Hama and prevent the government being overthrown.

The government reportedly then warned that anyone one remaining inside Hama would be considered an insurgent. Phone lines were severed, hospitals, schools and shops shut.

The city was sealed off for three weeks as artillery pounded opposition strongholds and then troops backed by tanks rolled in, destroying whole areas, including much of the old city, and leaving many thousands dead.

“I passed through the main street and it was full of rubble. I passed by the well-known clock in Hama and there was no trace of it. There was no trace left of the big mosque as I used to know it,” a witness told the BBC.

“I saw whole neighbourhoods that were turned into ruins.”

Officials drove around the city instructing people to go back to work and to school, saying life was back to normal.

The memories of Hama, coupled with the repression opposition groups, meant it was nearly 20 years before widespread dissent became public again in Syria.

But in March 2011, pro-democracy protests erupted after the arrest and torture of a group of teenagers who had painted revolutionary slogans on walls at their school in the southern city of Deraa. 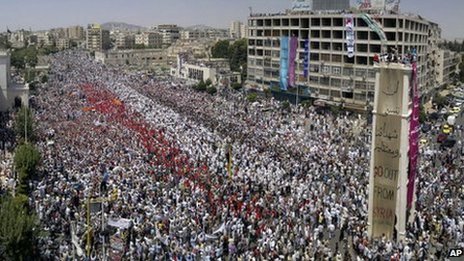 Hama residents risked a violent crackdown to express their opposition

Not long afterwards, protesters were once again on the streets of Hama and the city came to the fore in the uprising against Bashar al-Assad.

Hama has seen some of the largest anti-government demonstrations, with hundreds of thousands of people gathering in its central square.

It has also born witness to some of the uprising’s bloodiest days.

On 1 July 2011 – a day before the start of the Islamic holy month of Ramadan – security forces returned en masse to Hama, opening fire on demonstrations in several areas. Activists said more than 100 people were killed. On 3 August, tanks stormed the city in an attempt to put an end to the protests, reportedly leaving more than 130 dead.

On 3 February 2012, activists uploaded images of norias painted red to commemorate the 30th anniversary of the massacre. One bore graffiti saying: “Hafez died, and Hama didn’t. Bashar will die, and Hama won’t.”