On June 29 the press conference of Mkrtich Minasyan, Head of the RA NA delegation to the Inter-Parliamentary Assembly on Orthodoxy, and Ruzanna Arakelyan,Â member of the delegation, took place, where the work and the outcome of the 18th annual General Assembly held in Paris on June 21-24, was submitted.

Mkrtich Minasyan noted that 28 countries were represented in the Assembly: it was registered by the UN and a cooperation treaty had been signed with the Parliamentary Assembly of the African countries this year. According to the Head of the delegation, the work of the current year has been directed to religious values of Christianity and the ways of overcoming nowadays crisis.

Mkrtich Minasyan informed them that the Resolution on the Genocide committed against Christian Peoples: Armenians, Greeks and Assyrians, in the Ottoman Empire has been unanimously adopted by all the delegates during the Assembly. After the Resolution had been adopted Mr Minasyan expressed his gratitude to the delegates in the name of Armenia and the whole Armenian people. The resolution in particular says: 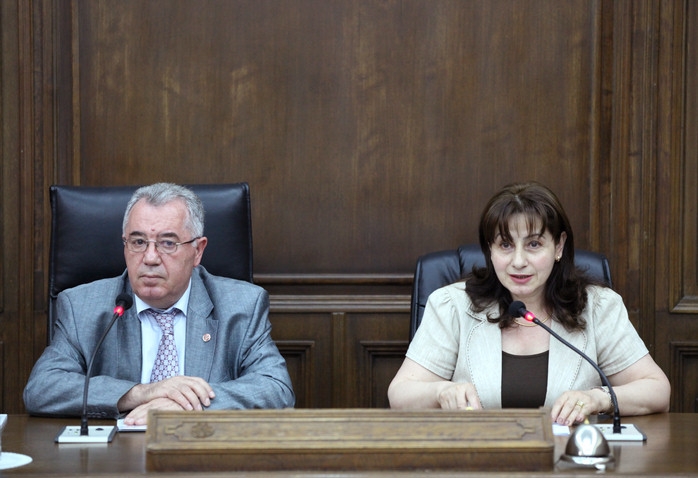 â€œWe, the participants of the 18th annual General Assembly of the Inter-Parliamentary Assembly on Orthodoxy (I.A.O.), held in Paris, June 21-24, 2011.

– expressing our solidarity to all those who struggle for the acknowledgement and condemnation of the Genocide against Christians by the Ottoman Empire in the late 19th century â€“ early 20th century.

– condemning the fact that until present, Turkey refuses to recognize the Genocide perpetrated against the indigenous Christians of the Ottoman Empire â€“ Armenians, Greeks and Assyrians, as well as all acts of destruction of their historic-cultural heritage.

– stressing that the Genocide is a heinous crime against humanity and ought to be condemned regardless of runtime and state political interests,

– realizing that all civilized nations have both the moral and historical duty to acknowledge and condemn Genocide in all its forms and call upon the modern state of Turkey to acknowledge responsibility, as best guarantee for averting similar crimes in the future,

– we call Turkey, in the context of the efforts it has already been making for a course towards democracy and transparency, to revisit historic reality and examine these aspects of historic past thoroughly and critically,

We call upon all member-states of the Inter-Parliamentary Assembly on Orthodoxy (I.A.O.) and the international community to condemn the Genocide against the Armenians, Greeks and Assyrians perpetrated during the Ottoman Empire, and call upon Turkey to realize and accept liability in the name of restoring historic justice.â€

Ruzanna Arakelyan considered the Resolution adopted in the Assembly a big victory. It was mentioned that Turkey and Azerbaijan did not take part in the works of the Assembly, as only Christian deputies were involved in the Assembly.

At the end of the press conference Mkrtich Minasyan and Ruzanna Arakelyan answered the journalistsâ€™ questions.