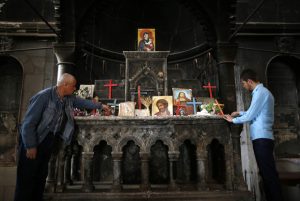 Iraqi Christian residents of Qaraqosh (also known as Hamdaniya), some 30 kilometres east of Mosul, attend the first Palm Sunday service at the heavily damaged Church of the Immaculate Conception on April 9, 2017, since Iraqi forces recaptured it from Islamic State (IS) group jihadists. – Qaraqosh, with an overwhelmingly Christian population of around 50,000 before the jihadists took over the area in August 2014, was the largest Christian town in Iraq. (Photo by AHMAD GHARABLI / AFP)

Iraqi Christians of Qaraqosh attend the first Palm Sunday service at the heavily damaged Church of the Immaculate Conception on April 9, 2017, since Iraqi forces recaptured it from Daesh. (AFP/File Photo)
Mahamad Ameen Abdul Al-Jawad
Meethak Al-Khatib
Robert Edwards
Daesh militants stormed the historical town in Nineveh governorate in August 2014, expelling its 45,000-strong Christian population
Some Christian residents feel that the time of sectarian conflicts that have plagued Iraq since the 2003 US-led invasion has passed
QARAQOSH / IRBIL / MEXICO CITY: On a recent afternoon, Salah Hadi applied a coat of cement on a large ceramic tile and carefully pressed it into place. The 51-year-old’s home in the northern Iraqi town of Qaraqosh is still blackened with soot after Daesh militants set it ablaze in 2014. But with long ancestral ties to the town, Hadi is determined to repair the damage.

“I came back to Qaraqosh in 2017 after the war was over,” Hadi told Arab News as he stepped back to check that the new tiles were level. “The town was full of rubble and destruction. There were war remnants. Most of the houses were burned.”

The arrival of Pope Francis has offered the Nineveh governorate’s Christian population a keen sense of spiritual renewal, but also a moment for sad reflection on its traumatic recent experiences.

“The Daesh period was a time of pain and hardship,” said Hadi. “Every community in Iraq was hurt by Daesh’s attack. What happened during the time of Daesh was hard, but it has to be told.” Nawyiyl Al-Qisitawmana, the priest at St. John the Baptist Syriac Catholic Church in Qaraqosh, says Daesh’s attack could have been avoided had the government protected them. (Mahamad Ameen Abdul Al-Jawad)

On Aug. 6-7, 2014, Daesh militants stormed Qaraqosh, expelling the town’s 45,000 Christians, tearing down crosses, burning ancient manuscripts and desecrating its precious religious architecture, including the Church of the Immaculate Conception, which Daesh turned into a firing range.

A month earlier, the militants had seized control of nearby Mosul and declared it the de-facto capital of their self-styled caliphate. Daesh went on to capture the ancestral homes of Iraq’s vulnerable ethno-religious minorities, including the Yazidi homeland of Sinjar.

Those unable to escape the group’s lightning advance were either forced to convert to its warped interpretation of Islam or put to death. Others were sold into slavery.

Since the US-led invasion in 2003, the Christian population of Iraq had fallen from around 1.5 million to around 350,000-450,000 in 2014. With many now choosing exile abroad, their numbers have dwindled further.

With his wife and three children in tow, Hadi fled the onslaught to the nearby city of Irbil, capital of the semi-autonomous Kurdistan region of Iraq. After a brief stay with family, they moved to a makeshift displacement camp at a local church in Ankawa, a Christian neighborhood in the north of the city.

“Some families were late to leave. Daesh took them to Mosul,” Hadi said. “We thought it would last only a few days and we would be back in our home. But it was much longer.”

Hadi’s neighbor, Sharabil Noah, also fled to Irbil to escape the Daesh invasion. There he and his family rented a house until they felt it was safe enough to return.

“We didn’t take our belongings when we left. We thought it would be only a few days and we would be back home,” the 52-year-old told Arab News, a large cross hanging on the living room wall above his head.

“When we came back, the town was destroyed. It was a ghost town full of stray dogs. There was no water, no electricity, no infrastructure. All of it was gone.” Salah Hadi is determined to rebuild his home in the town where his family has lived for generations. (Mahamad Ameen Abdul Al-Jawad)

Although he has struggled to find work, Noah is determined to rebuild his life in Qaraqosh. “This is the land of our ancestors. We will not leave it,” he said.

There is a deep sense of bitterness among many of Iraq’s Christians who believe the government in Baghdad had neglected them, allowed sectarian hatreds to fester, and abandoned them to their fate at the hands of Daesh.

“What happened in 2014 could have been avoided had there been real protection from the government,” Father Nawyiyl Al-Qisitawmana, the priest at St. John the Baptist Syriac Catholic Church in Qaraqosh, told Arab News. A large mural of Francis takes pride of place in the church’s cavernous, sky-blue nave.

“Iraqis have for many years suffered from wars, especially in the period of Al-Qaeda and Daesh. Muslims, Christians, Yazidis and Sabeans are all oppressed in Iraq,” the 70-year-old said.

“With the pope’s visit, the world’s attention will be directed at Iraq. The world will know what occurred in Iraq when the pope visits the places that were destroyed by Daesh.

“The world will feel the suffering of the Iraqis. This visit will bring hope for all Iraqis, not only Christians. The pope is visiting the Iraqi people to encourage them to stay in Iraq and to live in peace and freedom.”

Sharabi Noah, who is determined to rebuild his life in Qaraqosh. (Mahamad Ameen Abdul Al-Jawad)

Francis was due to arrive in Irbil on Sunday before making his way by helicopter to Mosul. There he was scheduled to pray in the Square of the Four Churches — Syro-Catholic, Syriac Orthodox, Armenian Orthodox and Chaldean — to honor the victims of Daesh and the savage battle to retake the city.

Before returning to Irbil, to hold Mass at Franso Hariri stadium, Francis was expected to make a stop in Qaraqosh. Well in advance of his visit, the streets were adorned with banners welcoming him.

“A visit by the pope is always big for any country, but here it’s more special,” Joseph Hanna, who is part of the local committee that will receive the pope, told Arab News.

“It is not only about reconstruction. The pope’s visit to the Christian areas represents moral support to the people and it’s a big reassurance to confirm life is beginning to come back.”

Hanna, 45, was especially pleased to see Francis visit Najaf to meet with Grand Ayatollah Ali Al-Sistani, spiritual leader of Iraq’s Shiite Muslims — the first face-to-face meeting between a Catholic pontiff and a Shiite ayatollah. “In my opinion, it’s a great message of peace and coexistence,” he said.

Indeed, a show of solidarity from Al-Sistani now might give persecuted Christians a measure of protection from Iraq’s marauding Shiite militias that have terrorized Christian families and prevented many of them from returning home.

A member of the Nineveh Plain Protection Units (NPU), a small Christian militia charged with protecting the predominantly Christian Iraqi town of Qaraqosh, returns back to his uncle’s house in the town in 2017. (AFP/File Photo)

Noah wants security guarantees to prevent further persecution. “I would like to have international protection for us here that can assure the Christians that they can stay here, where their rights will be given and the Christians who left are allowed to return,” he said.

“The pope’s visit raises the spirits of Christians in Iraq and tells them there are people who care for them out there. I hope this visit will strengthen relations between the communities here.”

With help from aid agencies, life is gradually returning to normal in Qaraqosh. Hadi, for one, is confident better times lie ahead. “It is sad what has happened to Iraq,” he said as he scooped up more cement using a trowel to install another tile. “We have to stand together and be united in this country, so we can rebuild it over again.”

There is a palpable sense that the time of sectarian conflicts that have plagued Iraq since 2003 has passed and that the country can only move forward if it embraces its multi-confessional identity.

“Daesh feels like a far-off memory that is long gone now,” Hadi said, dusting off his hands. “We forgot about them. It’s over.”